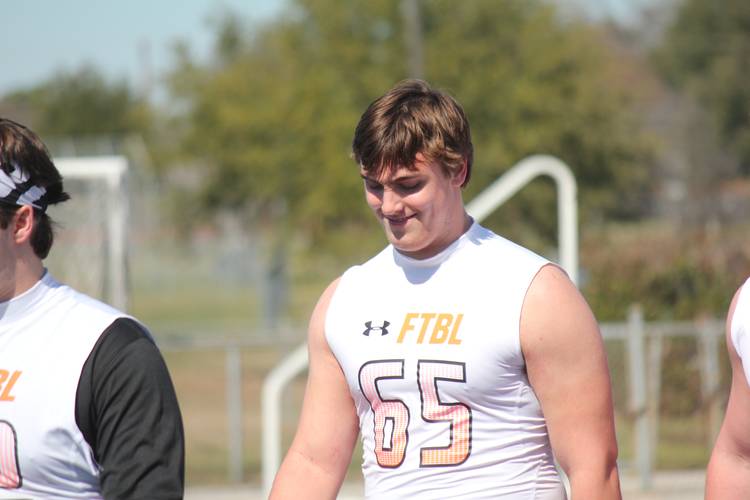 The world might be on pause for many of us as the COVID-19 pandemic continues to alter our lifestyles. Sports are on the backburner, but recruiting never stops. The Longhorns are beginning to enter an important part of the recruiting calendar as more players begin to trim their lists of offers to top schools despite not being able to take official visits. That may help Texas with the in-state prospects in the 2021 class with travel limited for the foreseeable future.

Let’s take a look at the top five targets on Texas’ offensive board:

Texas is in perfect shape to land the nation’s No. 1-ranked tackle. The Longhorns need a replacement for Samuel Cosmi, their starting left tackle who seems destined for the 2021 NFL draft. His dad, Blake, played offensive line at Texas. His older brother, Luke, is currently a UT linebacker. Brockermeyer is the prototypical offensive tackle and the Longhorns simply can’t lose a player of his stature to an out-of-state program. He would be Texas’ top-rated offensive lineman of the past 20 years and the first five-star line signee since Mason Walters in 2009.

Adding Brockermeyer to the 2021 class also means gaining the commitment of his twin brother, James, a four-star center. Tommy missed his junior season with a shoulder injury while James used it to carve out his own recruiting path. He’s the only in-state center to hold an offer from the Longhorns. James checks in at 6-3, 273 and is the second-ranked center prospect in the cycle.

Bottom line: Texas can’t consider the 2021 class a success unless the Brockermeyers sign.

There are two elite running backs in the state. Johnson and Camar Wheaton, a five-star from Garland Lakeview Centennial, are the top two running backs on many recruiting boards, including Texas’. Johnson is the lower-ranked nationally, but is the more college-ready back with his 200-pound frame. Wheaton is more of a big-play track star who’s still learning how to run inside the tackles. The Longhorns must sign one of the two to consider the running back position a success in the cycle.

Texas signed five-star Bijan Robinson in 2020, but he must be viewed as a three-year college loan if he’s as good as advertised. Continuing to build depth at the position is important to Tom Herman. Texas wants to sign two running backs in the cycle.

The other name to know is Jonathon Brooks of Hallettsville.

There’s not a better interior lineman in the state. Ohio State pledge Donovan Jackson is ranked as a guard, but he plays left tackle at Houston Bellaire Episcopal. Foster is a true guard who mans the position for Katy Taylor, the same school that 2021 UT commitment Hayden Conner attends. Foster is also friends with Texas quarterback pledge Jalen Milroe from their days playing youth football together in elementary school and the sixth grade.

Texas is trailing Oklahoma for Foster, but the two-sport star insists he won’t make a decision before he’s able to take official visits. The Longhorns hope to sway him to stay in-state with an eventual visit and with his friendships with Conner and Milroe. Foster also throws the shot put and wants to participate in track. Texas’ track and field program could hold the key as it is better than Oklahoma’s.

Herman’s offense depends on the slot receiver as much as any other position and Earle is the top slot target in the cycle. He’s a versatile, athletic weapon with more quick-twitch ability than any receiver currently on Texas’ roster. Earle is a two-time state champion at Aledo, recording 149 catches for 31 touchdowns over the past two seasons. He’s also rushed for 696 yards and 14 touchdowns while contributing in the return game. He might be the most important skill position target in the class because Texas needs an influx of talent at receiver.

Knox is a similar to Earle, but the Longhorns would absolutely take both if they can because it’s impossible to turn down that type of speed. Knox might be the fastest prospect in the state. He ran a 10.4 in the 100-meters to win the silver medal in the Louisiana Class 1A/2A meet in the spring of 2019. Knox moved to The Woodlands before the start of his junior year. He’s not a backup plan to Earle. He’s wanted in addition to Earle, and that duo would form the best combination of slot receiver commitments in the country.