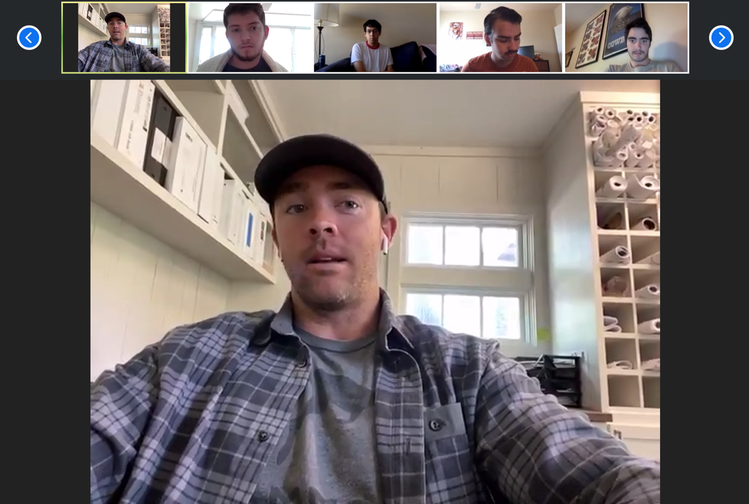 It’s not every day a Texas football legend shows up in your classroom. To the delight of 15 UT students, Thursday happened to be one of those days.

Former Texas quarterback Colt McCoy joined UT professor Kevin Robbins’ Reporting Sports class Thursday morning on a video call as a surprise for some of the many students who have begun online classes over the past month as a result of the coronavirus pandemic.

“What’s hard about this,” McCoy said, “is no one made a wrong decision or did something bad to result in all of us being in some random office or home or away from our friends and school. Just accepting some of that is a hard thing to do.”

McCoy and his family relocated to his home on the Frio River last month. He said he and his wife Rachel are remaining indoors with their three children. Most businesses and schools have been shut down indefinitely throughout the state.

McCoy, 33, signed a one-year, $1.5 million contract with the New York Giants last month after spending the last six seasons with the Washington Redskins.

“Right now, I’m in a hard place, too, because I would be in New York, going through OTA’s and learning a new offense and learning my new teammates and a new system,” he said. “That’s sort of shut down, too.”

One student told McCoy that he wouldn’t be at UT if it weren’t for him. Another said he may not have become a Longhorns fan if McCoy hadn’t led Texas to the 2008 win over Oklahoma.

That reminded McCoy of an early recruiting trip he made to the Cotton Bowl during his junior year of high school, when he watched the Texas-OU game from the Sooners’ sideline along with other prospects of both teams. McCoy sat next to former OU running back Adrian Peterson during the 2003 Texas-OU game.

“So we’re sitting in the bleachers, 20 or 30 rows off, like around the 50-yard line but on the Oklahoma side,” McCoy recalled “So he (Peterson) stood up in front of everybody and goes, ‘Just to let all you know, whoever wins this game, that’s where I’m going.’

McCoy left Texas in 2010 as the school’s all-time leader in quarterback starts, passing yards and passing touchdowns. He suffered a fractured right fibula against the Redskins on Dec. 3, 2018. The injury forced him to miss the entire 2019 season.

McCoy, who’s entering his 11th season, suggested that his leg is nearly fully healthy and said he could “go out (right now) and play a game and be efficient.”

As for the students who are facing unique challenges presented by the pandemic, McCoy shared words of guidance and encouragement: “One thing I stick to most of the time is finding something that’s your source of strength, what you rely on. For me, that’s my faith, and trusting that I’m being the man I’m supposed to be and leading my family.

“When we can get back on our feet, we will.”