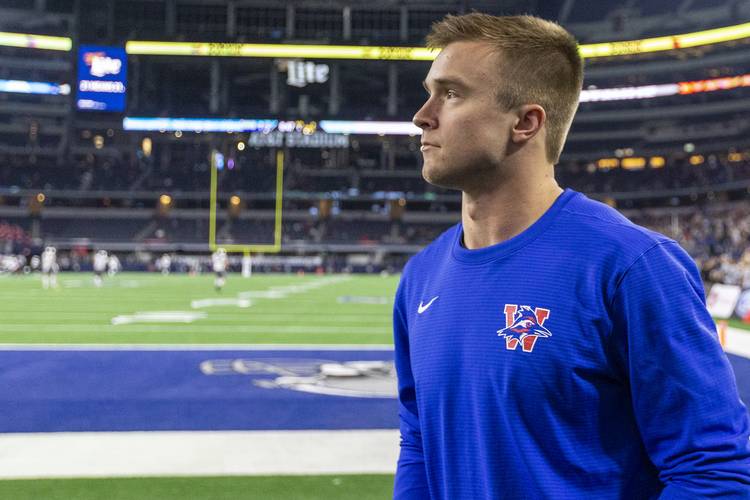 Quarantine life for Heisman Trophy candidates is just as miserable as it is for us mere mortals. At least Texas quarterback Sam Ehlinger is stuck at home with another Longhorn, his younger brother Jake, a linebacker.

“Obviously I have a workout partner,” Ehlinger said Thursday, “and he’s probably gotten sick of being in quarantine with me because I’ll take him in the backyard and I’ll pelt footballs at him when I want to throw.”

Targeting a return to Royal-Memorial Stadium is far more tricky.

Ehlinger spends his days working out in a makeshift weight room in his mom’s garage, taking online classes and trying to connect with teammates tossed far and wide. Like everybody else, the senior hopes for the best.

“I’m going to approach this as the season is going to start on time,” Ehlinger said on a conference call with reporters. “I’m going to take every day as if it’s another day when I’m at the facility.”

Ehlinger has long known his power extends far beyond the football field. On March 25, the Westlake product started a COVID-19 fundraiser on the GoFundMe website with the goal of raising $1 million. On Wednesday, it crossed $100,000.

“I understand the platform the University of Texas has is very powerful, and I wanted to do something to help people out in the community and come together,” Ehlinger said. “It’s been an incredible process to see the amount of support and donations from family, friends, fans, coaches, you name it. Everybody from my childhood to present day have helped contribute to that.”

Scrolling through the list of donors reveals a who’s-who of sorts. The McConaugheys, Rusty and Bill Duvall and Michael Klein all chipped in, as did Ehlinger’s coach, Tom Herman. Current assistants Mike Yurcich and Herb Hand contributed, as did Ehlinger’s previous quarterbacks coach Tim Beck.

Former Westlake standout and NFL quarterback Nick Foles’ foundation gave the final push to get Ehlinger’s total into six figures. “Obviously it’s only 10% of the way to the final destination — the goal is $1 million — so I’m going to continue to try to raise that,” Ehlinger said. “But it’s been an awesome effort, and I’m very appreciative of everyone that’s helped out.”

Ehlinger got the idea when he saw Clemson quarterback Trevor Lawrence start something similar. Lawrence got blowback initially since some believed it was a possible NCAA violation, but compliance officials got the NCAA’s blessing.

The debate over whether players can monetize their name, image and likeness is raging within NCAA offices and legislatures all over the nation. Ehlinger wasn’t trying to make a statement, per se, but he and Lawrence’s efforts will strengthen the argument that athletes’ names have true value.

“A lot of people think the NCAA is out to get everybody,” Ehlinger said. “They’re really flexible and they’re easy to work with and they’re wiling to help out in any way that they can.”

No final decision has been made on where Ehlinger’s funds will ultimately go. On the GoFundMe site, he listed non-profits like Boys & Girls Club of America, the Central Texas Food Bank and Austin Pets Alive.

Herman and his wife Michelle donated $60,000 to six different area charities, and together they’ve been active in distributing food to the needy.

As for why Austin Pets Alive, Ehlinger said, “I’ve grown up loving dogs and animals. When I was sitting down and thinking about doing this fundraiser, I thought obviously this is a crisis for people but animals have to be taken care of as well.”

Thanks to @sehlinger3 for including us in his GoFundMe, we’re able to save more pets just like this guy. His name? Ehlinger, of course. 🤘🏼#HookEm pic.twitter.com/nbC2R5mLfZ

Meanwhile, Ehlinger is just trying to get through each day. Like most, he sticks to a routine. He said he’s up at 6:30 a.m. every day and lifts weights in his garage. UT players will have web meetings with assistant coaches or the entire team, and then he’ll go run on an open field.

Ehlinger said he’s got online classes from 12:30-3 p.m., then he does mobility work and treatment. Late in the afternoons, he’ll go throw and then come home for dinner. Tomorrow, he’ll wake up and do it all over again.

“I’ve been trying to focus on the positives instead of my concerns,” Ehlinger said. He spends time communicating with teammates, trying to reach as many as possible. Herman said Ehlinger has hosted teammates who are local to work out in his garage, everyone standing six feet apart, of course.

“He knows you’re not going to win championships 1-on-11,” Herman said on the Statesman’s “On Second Thought” podcast. “You’ve got to have 10 other dudes next to you on the field that are giving everything you’ve got. He’s making that job a lot easier.”

Ehlinger, Herman and the coach’s two young sons all went to play golf at Lost Creek Country Club before the golf courses were closed. “It took us quite a long time just to get through nine holes, let’s put it that way,” Herman said.

The coach and the quarterback likely talked about the upcoming season and what to expect from new offensive coordinator Mike Yurcich. Herman told the Statesman in March that all first- and second-down plays were installed in January and February. He wanted to use the spring for situational football.

Ehlinger echoed that sentiment Thursday. “I don’t really know exactly what the full playbook looks like,” he said. “But I will say he has a lot of really, really good ideas for getting playmakers into space, playing with tempo and using our incredible athletes to the best of their abilities to go make plays.”

🍿Here is every TD featuring @sehlinger3 from the 2019 season. 🤘#ThisIsTexas #HookEm pic.twitter.com/8CtuYiKWT0

Health wise, Ehlinger said he’s moved past a stubborn rib injury that cropped up again in February. “Not quite sure what re-aggravated it, but it feels really good right now,” he said.

He’s ready, but Ehlinger must wait. And watch. And hope.

“I can’t have a fall camp by myself,” Ehlinger said. “But I’m going to control everything up until that point and hope that everything begins soon.”