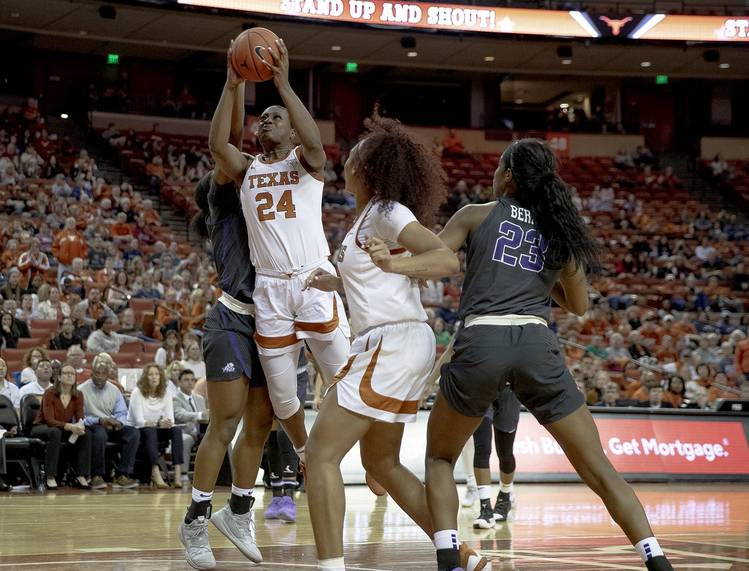 Joyner Holmes has a problem.

On Friday, the former Texas player will find out where she’ll next play while watching the WNBA draft with family and friends. She hadn’t given much thought to dressing up, but her mother is making her wear something nice since a local newspaper photographer will be in her Cedar Hill home.

Holmes, however, only brought two weeks worth of clothes home from Austin last month. Since the coronavirus pandemic halted her season and moved her classes online, she hasn’t needed to come back to Austin. Wearing a burnt-orange T-shirt on Thursday, Holmes admitted that “I’ve been digging out of the same bag for the last month-and-a-half.”

“I’m probably going to try to go find something and doll myself up as much as I can with the things that I have in my house,” she added.

After four years at Texas, Holmes is set for the next stage of her career. A 6-3 forward who was once the nation’s second-best recruit, she  averaged 13.1 points and 8.7 rebounds per game as a senior. Earlier this week, ESPN analyst Rebecca Lobo praised Holmes’ versatility. “She is a great athlete,” Lobo said.” She has a great WNBA body.”

Holmes will hear her name during Friday’s three-round draft, which will be conducted virtually. There is a question as to when she’ll be chosen, though.

ESPN’s Mechelle Voepel projected her as the ninth overall pick last week but dropped her into the second round in a mock draft this Wednesday. High Post Hoops has jotted her down as a second-round steal for Seattle. Newsday recently predicted that Holmes would be the last player taken in the 12-player first round, but the Associated Press slid her down to the third round.

“There’s too much talent there for a team not to take a shot on her,” High Post Hoops editor Howard Megdal tweeted this week.

Holmes was asked on Thursday if being a first-round pick mattered to her. She said she thought it was important to join a select list of five Longhorns who had previously been selected in the first round of the WNBA Draft. She also noted that more money was guaranteed to first-round draftees.

“I think I’ve proven myself to be a first-round pick, so I hope that happens,” Holmes said.

There are only 144 roster spots available in the WNBA. This season, there may be even fewer spots open since the veteran players don’t currently have overseas options.

With the exception of Kiara Leslie, who was injured, and Ezi Magbegor, who was drafted with the understanding that she’d remain overseas, all of the 2019 first-round picks played in at least 18 games last season. Five of the 12 second-round picks, however, did not appear in 10 games. Only one third-round pick hit that 10-game mark.

“It is very, very difficult to make a WNBA roster, even more difficult for a second-round pick or even a third- round pick to make it,” Lobo said. “That being said, there are certain teams that, if you are in the draft this year, you hope they draft you.

“You hope you’re drafted by the New York Liberty because they have a lot more positions on their roster to make a team. There are fewer roster spots at a place like Washington or Seattle just because of the makeup of their veterans and the success that they’ve had.”

Holmes has been joined by UT guards Sug Sutton and Lashann Higgs in this year’s draft pool. Those Longhorns are looking to become the 11th, 12th and 13th Longhorns taken in WNBA draft history.

Holmes took a week-and-a-half off after Texas’ season abruptly ended on March 12. She has been working out with former Texas teammate Ariel Atkins, a 2018 first-round pick who won a WNBA championship with the Washington Mystics last fall.

Holmes told reporters that she has talked directly with WNBA teams in Atlanta, Indiana, Seattle and New York. The Dallas Wings, who play in an arena 20 miles away from Holmes’ high school, has spoken to her agent. Washington has also inquired about her.

“Right now it’s really a lot of uncertainty just to where everybody’s going after the No. 1 pick,” Holmes said. “I’m nervous, but in a sense, I know I’ll be all right wherever I go. I’m just excited to see what the road has for me from this point forward.”