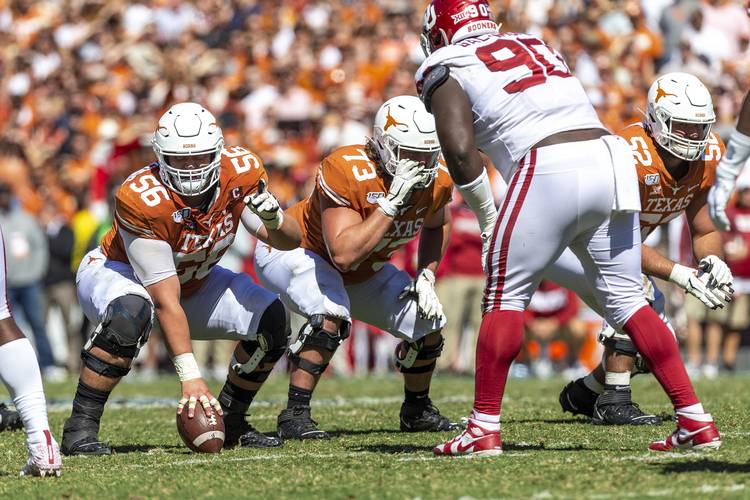 When he was in the fourth grade, Zach Shackelford got to set foot on an NFL field for the first time.

Living in Washington at the time, he and his youth league team had a game scheduled at Qwest Field in Seattle. Shackelford lined up as a guard and occasional fullback that day as pint-sized programs played on sections of the Seattle Seahawks’ home field. “As a kid, it was pretty crazy,” he recalled.

Over the past few years, NFL stadiums have become less of a novelty for Shackelford. As the starting center for Texas, he has played Saturdays on the Sunday fields of the Dallas Cowboys, Houston Texans, New Orleans Saints, Washington Redskins and Los Angeles Rams. He’s logged two starts in Houston’s NRG Stadium.

Were all those games a preview for Shackelford’s future? As one of the Longhorns available in the upcoming NFL draft, he certainly hopes so.

“It’s been a dream of mine probably since I started playing football in second grade,” Shackelford said.

On New Years Eve, Shackelford helped lead Texas to a 38-10 win over Utah in the Alamo Bowl. The following day, it was a new year and a new phase of his football career began.

Shackelford continued training at Texas while preparing for the school’s pro day on April 1. That pro day, however, never happened. Due to the coronavirus pandemic, UT’s on-campus showcase for NFL scouts was canceled.

Texas wasn’t the only school that called off its pro day. On March 12, NFL franchises began pulling personnel off the road as concerns grew about the coronavirus. By the end of that day, only 15 of the 65 Power Five schools had hosted a pro day.

Blue bloods like Ohio State, LSU, Michigan and USC missed out on theirs too. Alabama, which has led the nation in draft selections in two of the past three drafts, did too. Kansas State, Kansas, Oklahoma State and Oklahoma were the only Big 12 teams that beat the unexpected deadline.

Many draft hopefuls were able to overcome the loss of their pro days since they had previously participated in February’s NFL combine. Shackelford, however, was not among the 300-plus prospects invited to Indianapolis.

“There’s people that are at a worse disadvantage than I am,” said UT safety and combine invitee Brandon Jones. “Their pro day was going to be their combine.”

A frequent participant in media sessions this past season, Shackelford’s go-to response has often been “control what you can control.” He stayed on brand when asked about the cancellation of his pro day.

“Not everything goes how you want it to, and that’s just a part of life,” Shackelford said. “‘Control what you can control’ has been a big thing for me over my career. If you make a mistake, you can’t go back and fix it, and just pouting about it doesn’t get you anywhere. It kind of ruins your mood and inhibits your productivity going forward. I always just try to put things behind me that I can’t control anymore.”

When Texas closed its campus, Shackelford trained in Belton for a week. When he got back to Austin, he made do with a makeshift weight set at his home. He ran at a nearby hill and golf course.

The 6-4, 305-pound lineman also put together a virtual pro day with his agent, Joby Branion of Vanguard Sports. According to Shackelford, he did 33 reps on the bench press and recorded a time of 7.48 seconds in the 3-cone drill. A time of 5.4 seconds in the 40-yard dash admittedly wasn’t great, but he was pleased with a 1.75-second, 10-yard split.

“That’s what I wanted to show, is my quick burst and my lateral ability to move,” Shackelford said. “I think that’s what I did and I was happy with it.”

Plenty of film already exists on Shackelford, who was a four-year starter at Texas. The Big 12 gave him a second-team designation on its honor roll in 2018 and a first-team nod in 2019.  A team captain as a senior, he was called a “coach on the field” by UT offensive line coach Herb Hand.

“Zach Shackelford brings so much to the table,” Hand said. “As a player, he’s both tough and smart. He also put in the hours studying film, so he was very prepared on game day. Along with that, he has a great feel for the game.”

Shackelford is graded by NFL.com as the 11th-best center prospect in the draft. His name has popped up as a late-round possibility in some mock drafts. He has also discussed the undrafted free agency process with former teammates Andrew Beck and Calvin Anderson.

“I just want to get back to playing football,” said Shackelford, who has recently heard from the 49ers, Cardinals and Ravens. “When I get an opportunity, I’m going to take advantage of it. I’m looking forward to whatever team decides to do that.”