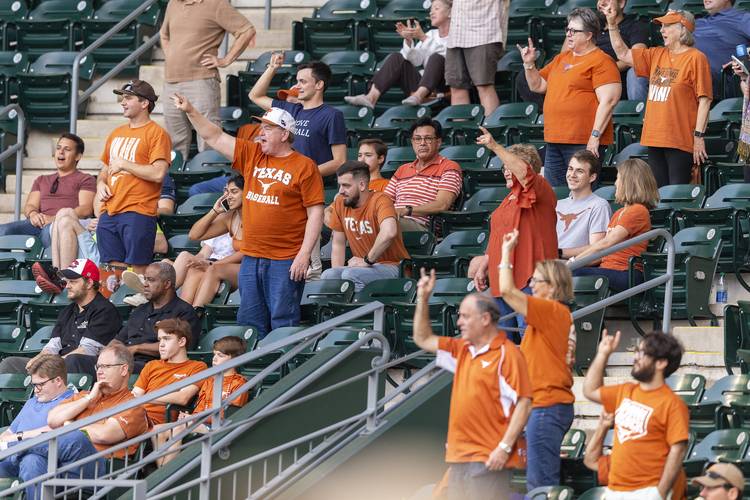 A few weeks ago, Gus Armbruster had planned on celebrating his seventh birthday at UFCU Disch-Falk Field.

A UT baseball game would have been the perfect setting for a birthday party for Gus, who is one of the Longhorns’ biggest — and at the same time, smallest — fans. One year ago, he turned six while watching Texas lose a 3-0 game to rival Texas Tech.  With New Mexico being the scheduled opponent for this birthday weekend this time, Gus was going to root for a better result alongside family, friends and teammates from his coach-pitch team.

Gus, though, never made it to the ballpark that Sunday. Neither did the Longhorns or Lobos. Three days earlier, the NCAA had canceled its spring championships as fears spread about the coronavirus pandemic. The following day, on March 13, UT’s entire baseball season was canceled.

“As the season got canceled, he was just crushed,” said Gus’ father, Jason. “He didn’t understand it.”

Texas averaged 5,082 fans over its 11 home games during this shortened season. That was the sixth-best average in the country. Texas last failed to lead the Big 12 in attendance in 2005.

Young Gus is not alone in his devoted fandom. Marc Pena, for example, is the backbone of the OccupyLF tailgating group beyond the Disch’s left field fence. Scott Wilson, who witnessed his first Longhorns win back in 1969, has attended every one of Texas’ last 1,246 games. Betty Bird and Matt and June Harris are among the longtime fans that join the Longhorns on the road.

“I’ve definitely come to grips with realizing that nothing is going to change and the season is going to be lost,” Pena said. “I think the wound is still fresh for all of us, though.”

Since the cancellation of the season, Texas has missed out on 11 home games. The Longhorns were supposed to have hosted a three-game series with Kansas this weekend. So, what have these fans been doing with this unexpected free time?

Pena has admittedly driven by Disch-Falk a few times over the past month. He even took his laptop and worked outside the ballpark one day. After OccupyLF “caught quite a bit of heat” for hosting a farewell wiffleball game during that first baseball-less weekend in March as social distancing was being introduced into the national lexicon, the group’s core members have kept in touch through Zoom meetings and text chains.

Pena operates the @OccupyLF Twitter handle, which has more than 7,300 followers. On April 10, an online fundraiser was launched for unemployed service industry workers and musicians in Austin. Selling OccupyLF-themed koozies, the tailgaters raised $8,000 in the first 24 hours.

Since Wilson travels to all of UT’s away games and attends other events in the athletic department, his schedule this spring has really opened up. He has started a long-neglected project of organizing a closet at his home that is full of game programs. He has called to check up on old umpires and UT baseball players. He has also found himself watching the Longhorn Network more than he ever has.

“One of the cable people once said to me, don’t you want the Longhorn Network?, and I said I’m at most of the games,” Wilson joked.

Baseball still consumes the life of Gus, who even wore his cleats on a fishing trip this week. His birthday party was moved to his home, but UT pitcher Kamron Fields stopped by and the family of infielder Lance Ford sent cookies. When outside, he has the playlist of the Longhorns’ walk-up songs to use while practicing baseball. While inside, he has recreated the Longhorns for his “MLB The Show 20” video game. His parents even scheduled an online hitting tutorial with former UT infielder Masen Hibbeler.

The morning after each of UT’s canceled games, Gus will ask his parents for the result of the Twitter simulation done by UT fan @LanceJNorth. Not surprisingly, a Texas team that was 14-3 on March 13 hasn’t lost a fake game since its season ended.

As for when those simulations will become a reality for the Texas baseball team, nobody knows. Both Jason Armbruster and Pena remain optimistic and cautious about the future. There are still many factors — the continued spread of the disease and what happens with the 2020 football season — at play.

“I think everybody’s super curious about the baseball season for next year,” Pena said. “We really have our fingers crossed that it’s going to be business as usual once we get to February of 2021, but there’s really no way to know that at this point.”