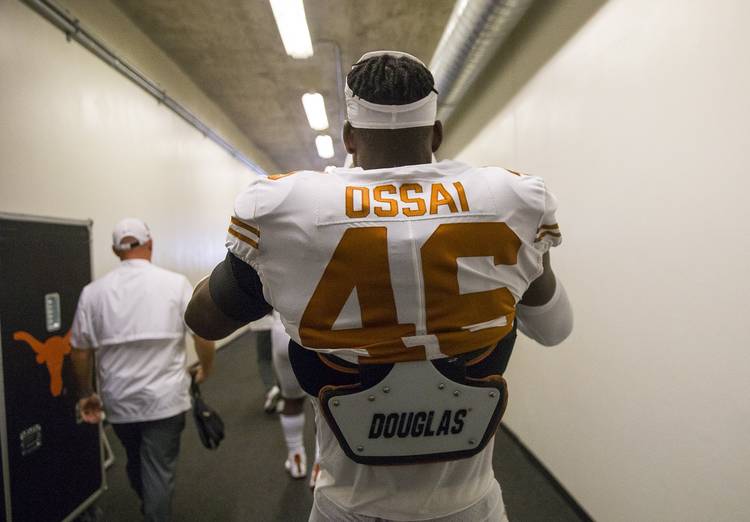 Texas Longhorns linebacker Joseph Ossai (46) walks out onto the field against TCU Horned Frogs during pre-game during an NCAA college football game at Amon G. Carter Stadium in Fort Worth, Texas [RICARDO B. BRAZZIELL/AMERICAN-STATESMAN]

This was supposed to be a typically busy weekend in a whirlwind spring semester at Texas. Baseball, softball, track, tennis and golf should be going strong. Instead, it’s quiet.

Nobody knows when this coronavirus stoppage will end, and everybody is now worried about football season. School officials released a video this week narrated by Colt McCoy meant to keep spirits up.

“We know the Tower will be lit again,” McCoy says on the video. “Until then, keep your Horns up.”

The American-Statesman normally waits until the end of the school year to review our annual Texas Ten, a department-wide look at 10 Longhorns poised for a big season. Alas, the athletic year was essentially over in mid-March.

Some of our picks in August look like no-brainers now, but that wasn’t entirely the case when the school year began.

Playing above and beyond expectations, Ossai was Texas’ leading tackler (90), had five sacks and two interceptions. And some believed he was playing out of position at linebacker.

In the Alamo Bowl, coaches moved him to defensive end and let him rush off the edge. It made a tremendous difference. Ossai just went wild; he had nine tackles, three sacks and six tackles for loss to earn defensive player of the game honors. Coach Tom Herman said Ossai will play a new hybrid position called the “jack” going forward, allowing Ossai to be the headliner of a new four-man defensive front.

The Big 12 freshman of the year in 2018 built on her impressive résumé as a sophomore last fall. Eggleston was a unanimous first-team All-Big 12 selection and hammered home 347 kills (3.54 average). She opened the season with 13 straight double-digit kill performances, including a career-high 25 kills against BYU. The Horns went 23-4 and won a share of the Big 12 title.

This was supposed to be a breakout season for the sophomore from Cibolo. But Liddell’s season got off to a rocky start for the men’s basketball team when he missed the opener because of a concussion. He started the next game against Purdue, racked up 14 points and appeared to be settling in.

But Liddell started playing through back pain and his numbers leveled off. He missed two conference games, played in two more and then was shut down for the season. Liddell’s season wasn’t disappointing so much as it was incomplete.

One of the biggest issues for any big post player is learning how to play physical. Collier got the hang of it as a freshman by playing in 31 games. Then during her sophomore season, she became a steady, bankable force.

If there was any pressure joining the defending national champions, Woldeab didn’t show it. The freshman went 8-6 in singles during the fall season and was 4-2 in the spring before the pandemic stopped everything.

Woldeab held his own playing in the No. 3 spot against Georgia, getting a three-set win over a player ranked 79th nationally. His best match of the spring was a stunning comeback against 17th-ranked Duarte Vale of Florida. Down 5-0 in the first set, Woldeab won 11 straight games and 12 of 13 total to notch a rather shocking singles point. Texas would beat No. 1-ranked Florida 5-2.

Being a key figure on the No. 1-ranked women’s golf team and getting your picture taken with Darius Rucker isn’t all bad, right? Those were some of the highlights of Cooper’s sophomore season that was just getting going when things were shut down. She logged her first top-10 finish of the season and had a team-high seven birdies at the Darius Rucker Invitational at Hilton Head, S.C.

Cooper logged six tournaments and 18 rounds this season, with a stroke average of 72.94. Thirteen of her 18 rounds were par or better.

It seems nothing is going to stop Eddie Reese’s swimmers, not even a pandemic. The Longhorns won their 41st consecutive conference title at the Big 12 meet in February. Believe it or not, UT athletes won all 21 events.

It was obvious Krueger would be all over the pool. He was a three-time All-American and played a key role in UT’s run at the NCAA championships in 2019. Krueger was the Big 12 swimmer of the meet at the Big 12s. He tore through the 50 freestyle in 19.19 and the 100 free in 41.26 seconds.

Talk about an impressive start. Flannel, a sophomore, blew through 200 meters in 22.93 seconds at the Tiger Paw Invitational in Clemson, S.C. That was a third-place finish but also good enough for fourth on the NCAA list. Flannel was also part of UT’s 1,600-meter relay team that had made only two appearances this season.

Flannel won second in the 200 meters at the Big 12 championships in 2019 and advanced out of the NCAA regionals in 23.06. She  finished 12th at the NCAA championships in 23.00. The experience alone was worthwhile. Flannel was also on the 400- and 1,600-meter relay teams that ran in Austin.

Sprinters get all the glory. There’s more of that in Flannel’s future.

Senior Miranda Elish is garnering all the attention, but the Longhorns aren’t a one-armed band. O’Leary, a sophomore, was 6-0 in 49.2 innings this season before the stoppage. That included complete-game wins over Michigan on Feb. 29 and Liberty on March 7. She didn’t allow a run and scattered just eight hits in the two games. Clearly, O’Leary had hit a groove.

The NCAA has announced that all spring sport athletes get another year of eligibility, so expect to see Elish and O’Leary back again next season.

This was going to be a season of intrigue for Texas baseball after going 27-27 in 2019. Coach David Pierce’s club got off to a strong 14-3 start, which included series sweeps of Rice, Boise State and Cal State Fullerton.

Ford was the Horns’ starting second baseman as a freshman in 2019. But he played in four of UT’s 17 games, getting just two at-bats with four walks. Freshman Brenden Dixon won the starting job and had just one error in 14 games.