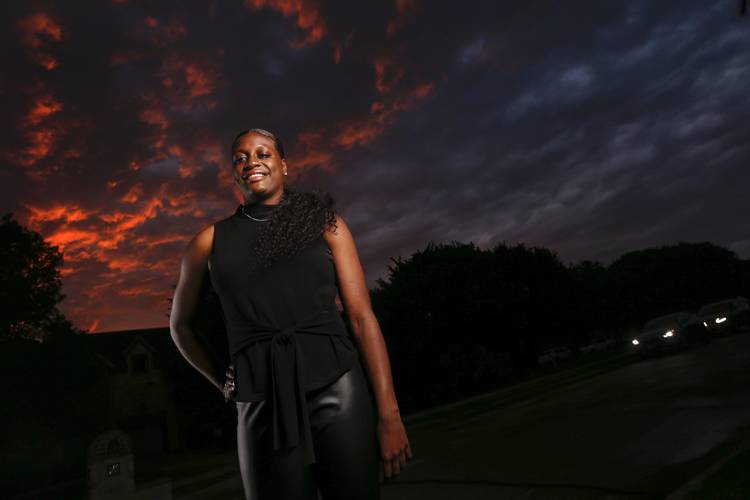 Joyner Holmes, formerly of Cedar Hill High School and the University of Texas, poses for a photograph outside her family's home in Cedar Hill after being drafted into the WNBA in the second round by the Seattle Storm on Friday. (Ryan Michalesko/The Dallas Morning News)

Over the weekend, Texas senior Joyner Holmes fulfilled a lifelong dream during a commercial break.

Holmes had gathered with family in her hometown of Cedar Hill to watch the WNBA draft Friday night. However, a series of picks that included Holmes’ were turned in while the ESPN telecast had cut for a break. When the coverage resumed, Holmes’ brother noticed her name on the screen.

A day later, Holmes admitted she was “a little bit upset” by how the broadcast played out. That production decision, though, didn’t spoil the news of the night in the Holmes household. Holmes had still been taken by the Seattle Storm. The 6-foot-3 forward had still been selected in the second round with the 19th overall pick. And she was still the 11th draft pick in UT’s history.

“I’m excited to go to Seattle and see what they have in store for me,” Holmes said. “I’ve been dreaming about this all my life. For it to actually happen and to experience it with my family is even better.”

Holmes was drafted 18 picks after Oregon’s Sabrina Ionescu went to the New York Liberty as the top choice. Former Baylor star and No. 3 pick Lauren Cox was among the seven draftees from the Big 12. UCLA guard Japreece Dean, who once shined at Austin’s Vista Ridge High, was selected in the third round by Chicago.

In Holmes, Seattle drafted a player who averaged 13.1 points and 8.7 rebounds as a senior. Inconsistent play and a suspension during her sophomore year hurt Holmes’ ability to live up to her billing as the Class of 2016’s second-ranked prospect.  But former Texas coach Karen Aston said in a statement Friday night that “the best is yet to come for Joyner.” Her new coach seemed to agree with that statement.

“There’s no denying she has a big upside,” Seattle coach Dan Hughes said. “We wanted to work with that upside. We were really pleased to give her an opportunity and get her in the second round.”

In the hours after she was drafted, Holmes was inundated with texts and messages on social media. She was unable to respond to everyone, but she had to take the phone call that came from Texas senior Sug Sutton.

A point guard, Sutton was taken by Washington with the 36th and final pick of the three-round draft. The women’s basketball program at Texas last had two players taken in the same draft in 2005.

Sutton, who tweeted that getting drafted “has been a lifelong dream,” was a two-time all-conference pick whose 419 assists rank ninth all-time at Texas. She joins a Washington franchise that won a WNBA championship last season with former UT guard Ariel Atkins in its starting lineup. On Friday, Mystics coach Mike Thibault said Sutton had “the right demeanor to play in our league. She’s got some things to learn, but she knows how to push the tempo.”

“Sug was such a joy to coach and I know she will be a huge asset to the Mystics,” Aston added. “She is a gym rat and a student of the game. I’m thrilled for her that she gets to continue playing, mainly because she has a true passion for the game.”

The WNBA season was set to start May 15, but that tip has been delayed indefinitely because of the coronavirus pandemic. When the season begins, UT’s rookies will have their work cut out for them.

In a recent conference call, ESPN analyst Rebecca Lobo called the WNBA the “hardest professional league to make.” Of the players taken in last year’s draft, only seven second-round picks and one third-round selection appeared in 10 games their rookie years. To make things more interesting, Lobo picked Seattle and Washington as two of the tougher rosters to make.

Hughes, however, said he viewed Holmes as a first-round option. Seattle also expects its first-round pick — Latvian guard Kitija Laksa — to remain overseas in 2020. Holmes said not to rule out Sutton because Washington needs depth at the point guard position.

“I know it’s going to be challenging playing behind people that have been in the league for a while,” Holmes said. “(It’s up to me to) give them something to work with.”

The Dotted Line: Seven players from the 2017 Fab 55 prepared for NFL Draft