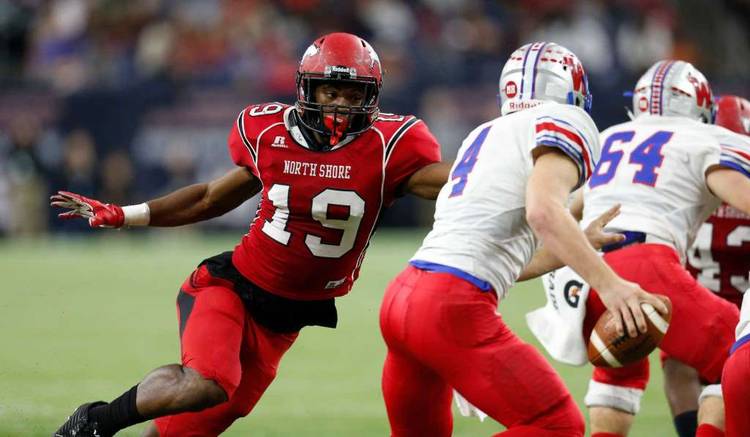 The 2017 edition of the Fabulous 55 holds a special place in this writer’s heart. It was my first crack at building the list, a task I still take incredibly seriously as a football fan who grew up in Cedar Park reading the newspaper to know where the best players in Texas high school football were playing in college. The Fab 55 is more than 30 years old at this point, and I truly consider it an honor that I am currently in charge of forming the list.

That 2017 group is draft eligible for the first time and seven of the 55 are expected to be drafted before the end of the weekend, including five players who were ranked inside the top 20. Let’s look back at those players as recruits, and project their NFL careers based on college performance.

Pick projection: Top 5 of first round

The only players expected to be picked above Okudah in the 2020 NFL Draft are quarterback Joe Burrow and defensive end Chase Young. Coincidentally, all three spent time at Ohio State at one point in their career, with Burrow transferring to LSU. Okudah is a long 6-1, 205-pound cornerback with all-pro expectations. Okudah was a consensus five-star recruit.

The Detroit Lions hold the third pick, which is where Okudah is likely to land unless another team trades up for a quarterback. Cornerbacks are the fourth-most valued position in the current NFL behind quarterback, defensive end and left tackle. The former collegiate All-American and Thorpe Award finalist is destined for NFL success.

Dobbins fell outside the top-five rankings in Texas on the 247Sports composite rankings after suffering a season ending ankle injury in the opening contest of his senior season. There was never a doubt about his potential and upside at Ohio State. Dobbins delivered, starting as a true freshman and improving in each of his three seasons in Columbus. He rushed for more than 2,000 yards and scored 21 times on the ground as a junior.

Pick projection: Top 20 of first round

Chaisson spurned Texas and newly hired head coach Tom Herman for LSU on national signing day of the 2017 recruiting cycle. Chaisson took a redshirt season in 2018 due to an injury, sandwiching solid seasons as a true freshman and redshirt sophomore around the ACL injury, helping the Tigers to a national championship earlier this year. He led LSU with 13.5 tackles for loss and 6.5 sacks in 2019. His ability to get after the quarterback puts him high on draft boards and it is unlikely that the former four-star recruit is available by pick 20 of the first round.

Pick projection: Top 15 of first round

Lamb was amongst my best projections from the 2017 class. The four-star ranked 22nd on the 247Sports composite list and 33 overall by 247Sports’ site rankings. Lamb was the top-ranked wide receiver on the 2017 Fab 55 and he more than lived up to that billing, becoming a dominant and unguardable force as a Sooner. He stamped his draft status as a junior, compiling 62 catches for 1,327 yards and 14 touchdowns in 13 starts.

The 2020 NFL Draft is stacked with wide receiver talent, including Texas stars Devin Duvernay and Collin Johnson. Lamb will be one of the first three wide receivers off the board and it is unlikely that he or Alabama’s Henry Ruggs III and Jerry Jeudy will be available after the 15th pick of the draft.

Reagor was the top-rated wide receiver in Texas for the 2017 cycle. He was ranked behind Lamb on the Fab 55. Reagor’s college career was hampered by poor quarterback play at TCU. He led the Horned Frogs in 2019 with 43 receptions for 611 yards and five touchdowns as a junior, earning second-team all-conference. He put up bigger numbers as a freshman and sophomore.

The former four-star recruit was electric in high school, and that upside still exists despite a pedestrian end to his career at TCU. Reagor is a deep threat who is also quick enough to elude defenders and play slot receiver. He’ll need to improve against press-coverage in the NFL after struggling against physical cornerbacks during his college career.

Benjamin overachieved in high school and college. He’s always been an underrated player because of his lack of size. He escaped the major schools in Texas and around the Big 12 during the recruiting process, electing to play at Arizona State. Benjamin proved his ability to carry a heavy load as a sophomore despite his 5-9 frame, toting the ball a school-record 300 times in 2018. His carries and production slipped as a junior, but there is no reason for a draftable running back to return to college due to the physical demands and short NFL life-span for running backs.

Murray is the best inside linebacker prospect in the NFL Draft. He was a stalwart of the Oklahoma defense in each of his three seasons in Norman. The four-star recruit was a Freshman All-American and co-Big 12 Defensive Player of the Year in 2017 after recording 78 tackles. Murray accounted for 155 tackles as a sophomore and 102 tackles as a junior. He’s a magnet to the football with the speed to run sideline-to-sideline and help in pass coverage, which is crucial for modern linebackers. Murray will be the first inside linebacker off the board in the draft and is unlikely to get out of the first round.

The Dotted Line: Three questions facing Texas on the recruiting trail amid COVID-19