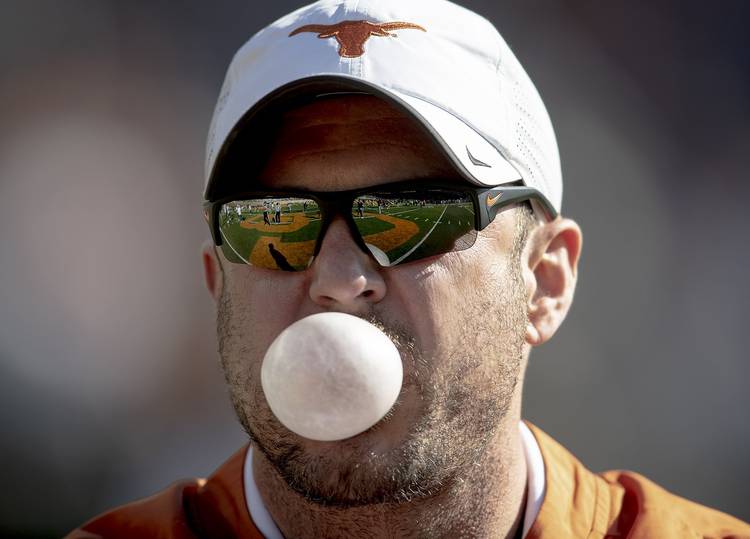 The Big 12 recruiting race is normally a two-team battle between Texas and Oklahoma. A quick start to the 2021 cycle back in the summer of 2019 put Texas out in front as the pace setter. Teams are beginning to catch up to Texas as Tom Herman’s squad has failed to add a single commitment to the class since last September. West Virginia and Baylor stormed toward the top of the recruiting mountain with strong spring months despite COVID-19 travel restrictions. Oklahoma remains in first gear as May approaches.

Texas hasn’t added a commitment to the 2021 class since September of last year, but the Longhorns remain atop the Big 12 recruiting rankings because of the quality of commitments. Sanders is a five-star athlete who could end up as a defensive end or wide receiver. Bowman is the second-ranked athlete in the country with a chance to play safety or wide receiver. Milroe is one of the top dual-threat quarterbacks in the country.

West Virginia is up to seven commitments, which is tied for third most in the Big 12. Milum and Anderson are the two four-star prospects in the class. Victor Wickstrom is a tight end prospect from Sweden. That’s how far head coach Neal Brown is willing to go to improve the Mountaineers. West Virginia hopes to improve on a 2020 cycle that finished 37th in the nation.

Kansas’ eight commitments are the second most in the Big 12. Four of those players hail from Texas, including Sterns, who is a three-star offensive tackle from Del Valle High School outside of Austin. The Jayhawks also hold pledges from three Dallas-area wide receivers. Les Miles’ program signed the 57th best class in 2020. It looks like the Jayhawks will improve on that in 2021, sitting currently at 22.

The Cyclones dipped into Austin to gain a commitment from Wright, a 6-1, 194-pound three-star quarterback from Austin High. He threw for more than 2,500 yards as a junior and a sophomore. He’s passed for 57 touchdowns in three years of varsity action.  Bonifas, a three-star offensive tackle, is one of the top players from Iowa.

Morton is a big get for the Red Raiders. The four-star from Eastland High in West Texas was the District 3-3A Division I offensive MVP as a sophomore and junior. The 6-2, 185-pound athlete is the eighth-ranked dual-threat quarterback in the country and a national top-250 prospect in the nation. He’s accounted for 47 touchdowns over the past two years. The Red Raiders hope Banks can become a star along the defensive line.

New head coach Dave Aranda was not idle during the months of March and April despite not being able to host recruits. He added commitments from four four-star prospects since the start of March when Richmond George Ranch wide receiver Javon Gipson pledged. Williams is from Oklahoma, but Jenkins and Caston are both members of the Fabulous 55.

Head coach Chris Klieman hopes success on the field transitions to better outcomes on the recruiting trail. The Wildcats hold five pledges, including four-star quarterback Rubley from Colorado. The 6-3, 205-pounder threw for nearly 2,000 yards in his past two seasons as a starter. Kansas State’s class currently ranks 33rd in the country. The 2020 class finished at 51st.

Two of Oklahoma’s four pledges are from Texas. Jackson is a four-star playmaker from Richmond Foster, which is the same school that produced Oklahoma wide receiver CeeDee Lamb. Jackson caught 122 passes for 2,419 yards and 33 touchdowns in his first two varsity seasons. Downs is a defensive end from Oklahoma while Montgomery is a three-star offensive tackle from Houston Episcopal.

TCU tends to slow-play the recruiting trail. TCU struggled at quarterback, so the first two pledges of the 2021 cycle came at that position. Battle is a three-star dual-threat from Alabama, while Honig is a pro-style quarterback from Germany.