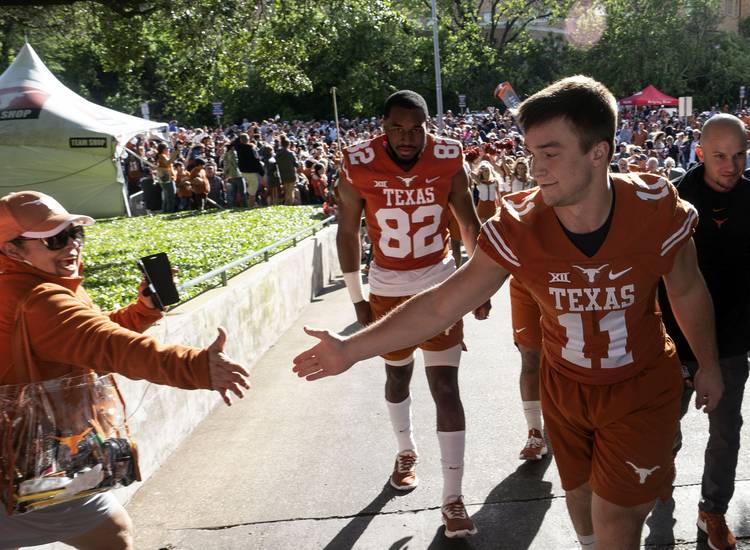 Texas quarterback Sam Ehlinger high-fives a fan as he and members of the Longhorns football team march along Bevo Boulevard past fans on their way to the team locker room before the start of the Orange and White spring game held at Royal-Memorial Stadium on Saturday, April, 13, 2019, in Austin, Texas. [Rodolfo Gonzalez for AMERICAN-STATESMAN]

Zoom will become a four-letter word in Drew Martin’s house, if it’s not already. No amount of webcasting can supplant face-to-face interaction, especially when your job is to interact with Texas fans.

As UT’s director of external operations, Martin and his staff were ready for the spring football game that was scheduled for Saturday.

Bevo Boulevard was supposed to come roaring to life, and the Longhorn City Limits stage was set to host another gameday concert. It’s an event that typically draws around 30,000 fans to Royal-Memorial Stadium.

Instead, Martin’s staff has been game-planning what Texas athletic events will look like when sports resume, whether that’s this fall or 2021. For the moment, celebrating the Longhorns means doing it online.

“We’ve got to be ready for everything,” Martin said. “So in my world, what does it look like for fans who don’t quite feel comfortable coming to a game? How are we ready to engage that fan base and still make them feel a part of something even if physically they can’t or aren’t able to be there in person?”

Martin said every day — “hour to hour” — there’s a new thought about what sporting events will look like.

“What does social distancing look like? What does fan engagement look like?” Martin said. “We’re sitting here toward the end of April and having active conversations, but we don’t quite know yet.”

Martin’s boss, athletic director Chris Del Conte, refuses to let “grass grow under our feet,” he often says. So how could Texas still engage with its fan base at time when we’re all supposed to be staying home?

Thus, the idea of “My Texas Tailgate” was born. Next Friday, Texas will stage a full day of online activities on all its social media channels in what the department is calling an “all-day virtual celebration.”

Coaches, athletes and support staff have been busy sending in cellphone videos, along with contributions from alums. Martin didn’t want audio and video perfection, just a contribution. Anyone working within Texas athletics was encouraged to submit something.

Longhorn Network has a full day of special programming lined up, including the best games from the 2019-20 athletic year. Fan voting will determine which event is shown from sports like football, men’s and women’s basketball, tennis and volleyball.

The athletic department leaned on its musical contacts to get video submissions from artists worthy of the Longhorn City Limits stage.

Strength coaches Yancy McKnight and Andrea Hudy will have workout tips that fans can do at home. Team nutritionist Amy Culp made contributions to a My Texas Tailgate Virtual Cookbook. Fans are encouraged to submit their favorite recipes, too.

Del Conte was the one who started Longhorn Fridays by encouraging fans to wear burnt orange at the end of every week. This is taking that idea to the extreme.

“What does Texas mean to you athletically and just celebrate it on that day,” Del Conte told the American-Statesman. “I love the concept.”

Said Martin: “A day long engagement with the Texas Longhorns like they’ve never seen before.”

Schools that aren’t taking advantage of their somewhat captive fan base are likely missing out on this unique moment.

“Engagement rates are higher right now as everyone switches to a work from home environment,” Martin said. “People are more engaged with their devices than ever before.”

Still, it’s not the same as being at Royal-Memorial Stadium or Gregory Gym on game day.

“Our job is to be ready when we get definitive information,” Martin said. What that will be is still anyone’s guess.

RELATED: From injuries to new coaches to depth: The pros, cons of Texas’ spring football called off

NCAA moves toward allowing athletes to be paid sponsors