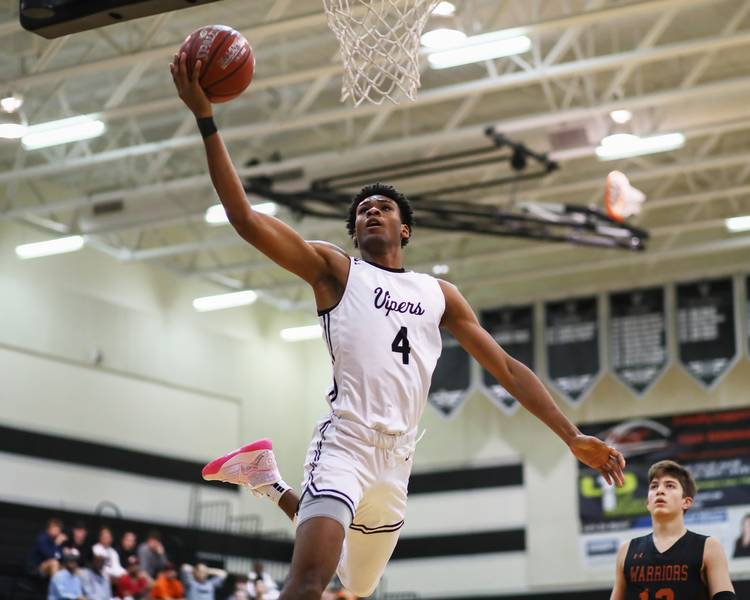 Vandegrift forward Greg Brown III (4) swoops in for a first-quarter layup against Westwood in a District 13-6A basketball game on Jan. 7, 2020, at Vandegrift High School. [PAUL KNIGHT/FOR STATESMAN]

Say whatever you will about Shaka Smart. But as a recruiter, whenever a five-star athlete lands his crosshairs, Smart doesn’t miss.

Smart spent years building relationships with Jarrett Allen and Mo Bamba and their families. To them, he was more than just the Texas basketball coach.

Smart went all in on Greg Brown III as a middle schooler. Now that he’s a 6-foot-9 athletic freak, Brown could have gone anywhere, even the NBA’s G League for a nice six-figure paycheck.

Instead, the five-star dunk machine is coming to the Longhorns in what is likely a one-year stop before the NBA.

“Coach Smart was the first coach to offer me in the eighth grade or seventh grade,” Brown said Friday during his announcement on Instagram. “We just built a family-type relationship since then.”

Wearing a visor turned backward, Brown didn’t mince words about the difficulty of picking between Texas and a host of blue-blood programs. The smile was unmistakable when Brown finally turned the visor around to reveal a UT logo.

“I’m happy to say I’ll be committing to the University of Texas. Hook ’em, Horns.”

Brown is the nation’s No. 9-rated recruit, according to 247Sports’ composite rankings. In the school’s official announcement, UT noted that Brown had a weighted 3.74 grade point average on a four-point scale.

“I’m just happy for a lot of people,” Smart told the Statesman. “I’m happy for Greg because it’s kind of been a long time coming for him. Like any other kid, he went through a range of emotions and some of the stress that comes with it.

Any Division I coach would take Brown. He’s got a 6-foot, 11-inch wingspan and 40-inch vertical leap. The G League wanted him, for sure. Brown turned down a low six-figure offer initially, one source said. The Undefeated reported that a $300,000 offer was on the table as of Wednesday.

Another source said Brown was offered $350,000 plus college tuition after his playing days were over. Brown will likely spend one season at UT and then become a multi-millionaire as a first-round NBA lottery pick.

Asked why he turned down the G League, Brown said, “We were talking for about two months, but we just thought it was best to go separate ways.”

Greg Brown II played football at Texas, but this was his son’s choice. In the end, Greg Brown III chose Texas partly because of Smart.

“We just built a great relationship,” Brown said. “They talked to my dad, my uncles, my grandfathers, every part of my family, since five years ago. It was just the relationship we built for so long, I thought it was best for me and my family to stay home.”

Brown scored 3,007 career points in four years at Vandegrift and grabbed almost 1,500 rebounds. He’s the first Austin-area athlete to win the Gatorade Texas player of the year honors since it was started in 2000. For local TV stations, Brown was a highlight machine.

“When he goes in between his legs in traffic and dunks on somebody, that’s not normal by any standard,” Vandegrift coach Cliff Ellis said Friday.

As for what Texas fans can expect, Ellis said, “Whatever price they paid to get into the gym, it’s going to be worth it. … And I’m glad he’s staying local. Even though I’m an Aggie, I may have to buy a burnt orange T-shirt. But I’m his biggest fan.”

So how did Texas succeed where others failed? Credit Smart and his assistant Jai Lucas, both of whom were relentless in their pursuit of the McDonald’s All-American.

“When Greg got the offer from North Carolina, they never called him again,” Ellis said. “We never saw them again. But Texas never stopped. They never gave up, they never relented. If somebody else was in the gym, if somebody else came to see him, either Jai Lucas or Shaka was there to watch him, too. They were protecting their territory.”

Ellis said Smart would spend time at Vandegrift’s games, practices and in the weight room. Perhaps that’s why Brown made it clear during interviews last season, as long as Smart was the coach at Texas, the Horns had a chance to sign him. Brown and his father never wavered on that public stance.

“We haven’t gotten them all,” Smart said. “There’s been some that we missed on that we terrific players, but I think our staff did a great job with Greg, most notably Jai Lucas.”

Sometimes, it’s easy for recruits to fall through the cracks because the team may have more pressing needs, Smart said. “Jai did a phenomenal job for us as a basketball staff making sure that Greg was always up high on our priority list.”

By adding Brown, next season’s Longhorns will be without question the best overall team of Smart’s six. It will be a veteran group, led by guards Matt Coleman III, Courtney Ramey and Andrew Jones. If Jericho Sims returns for his senior season, the frontcourt should be loaded.

Texas was 19-12 last season and went 9-9 in league play. Athletic director Chris Del Conte opted to stick with Smart for another season when some wanted a change. No athletic director will ever make a decision on any coach based on one recruit. Still in this case, it all worked out for UT.

“I want to give a shout-out to the Texas basketball team,” Brown said. “I said it here first. We’re about to go win a Big 12 championship. If God says so, we’re going to win the natty — NCAA championship.”

NCAA moves toward allowing athletes to be paid sponsors