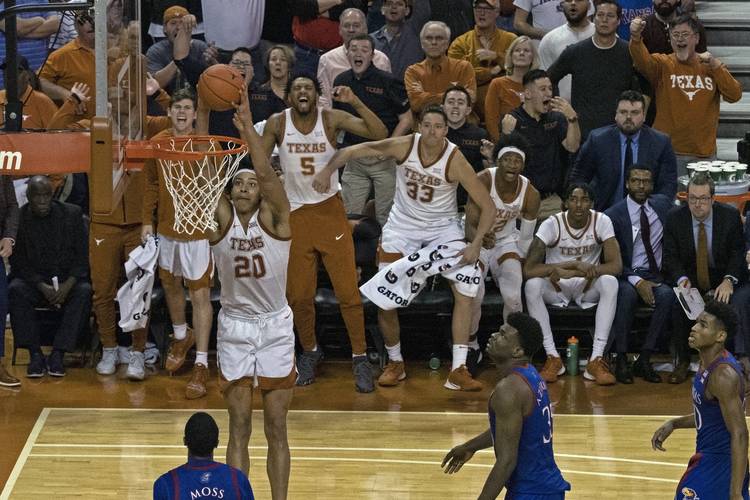 Every college basketball game has 200 minutes available for each team. It’s impossible for all five players to play a full 40 minutes each night, so minutes get divvied up among the backups at each position.

Texas coach Shaka Smart has a veteran roster returning next season, and there’s a strong case to be made that all 12 players deserve some kind of role. Brown makes it a rather fascinating baker’s dozen.

It’s only natural if every member of the Texas frontcourt is wondering how all these pieces will fit together next season.

Jericho Sims and Gerald Liddell are both expected to return from strained backs. Neither required surgery. Donovan Williams needed screws put into his injured knee but should return. “If he can get healthy, which is a big if, he will really be a good player here,” Smart said.

And what about rabble-rouser Brock Cunningham? Would Texas fans be OK with mothballing him? “Brock demonstrated that he can affect winning,” Smart said.

Will someone transfer after the depth chart shakes out a little bit? It’s certainly possible. Typically, all teams go through some natural attrition every offseason. These situations do have a way of working themselves out.

If the current 13-man roster arrives in October, Smart has plenty of lineup configurations. Fortunately for him, it’s only late April.

“The basic answer is that it’s going to play itself out with practice and workouts and the way the guys play. But it’s certainly going to be interesting,” Smart said.

“The biggest separator is who can contribute to a group of five guys on the floor where everyone is losing themselves in the fight for Texas to win,” the coach added. “There’s obviously talent considerations, shooting and rebounding considerations. But at the end of the day, that’s the biggest key.”

If Brown follows the path set by future NBA first-round picks Jarrett Allen, Mo Bamba and Jaxson Hayes, he’ll need a few months to figure things out. Allen routinely played 30-plus minutes per game and was up to 34 to 36 minutes in conference play. Bamba was in the mid-30s as well when he wasn’t sitting with foul trouble.

Allen and Bamba played on teams that weren’t that deep, too. Knowing they were one-and-done players, Smart played them as much as possible.

Hayes played behind Sims during the 2018-19 season until it became obvious to everyone that he should be in the starting lineup. Sims also developed a midseason foot injury, which came at a rather inopportune time. Hayes ended up averaging 23.3 minutes.

Last season, Smart put together lineups with duct tape and glue when injuries took their toll.

Take the 52-51 win over Oklahoma, for example. Smart had only eight Horns available, so Hamm got 30 minutes as a starter. Cunningham got 32 off the bench. Texas won on a last-second shot by guard Matt Coleman III.

At the Big 12 Tournament, Cunningham suffered an ankle injury in a shoot-around and would have missed the quarterfinal matchup against Texas Tech. Several walk-ons were put in the official scorebook just so Texas would have enough players to finish the game. The tournament was ultimately canceled because of the coronavirus.

Smart isn’t going to defer to Brown just because he’s recruited him for four years. Brown’s talent is undeniable. He scored 3,007 career points and grabbed almost 1,500 rebounds at Vandegrift High School. He was the Gatorade Texas Player of the Year and a McDonald’s All-American.

Anyone who has seen Brown play will attest to his showmanship. He doesn’t just dunk the basketball. Some of his highlights were just outrageous.

“He definitely has a feel for the flair that goes into playing the game, and he is a very violent player from a standpoint of his athleticism and the way he applies it to the game,” Smart said of Brown. “He likes to have fun out there, too. That’s something he kind of demonstrates when he’s taking off in transition or playing the way that he plays.”

Brown’s playing time isn’t likely to affect the guard rotation. Coleman, Courtney Ramey and Andrew Jones are the Horns’ anchors. Jase Febres is expected to return from a stress fracture.

Whether the offense flows better with Ramey at the point instead of Coleman is something Smart must also examine this offseason.

Like other Texas coaches, Smart is keeping in touch with his players through Zoom online video calls and texts. He’s been having one-on-one film sessions with each player, which has been surprising in all sorts of ways, Smart said.

“If there’s something positive that comes out of this for all of us, it’s an added level of gratitude,” Smart said.

The 2020-21 roster should be Smart’s best in his six seasons at Texas. “On paper,” he said, agreeing with that assessment. “Our job is to bring that to life.

“It’s also April, and we’re in the middle of an unprecedented time,” Smart said. “But the thing that I’m really exceed about in talking to our guys on the phone on FaceTime and on Zoom, they’re just really highly motivated and there’s a sense of appreciation they have for each other and for the opportunity to hopefully get back here and play basketball — whenever that is.”