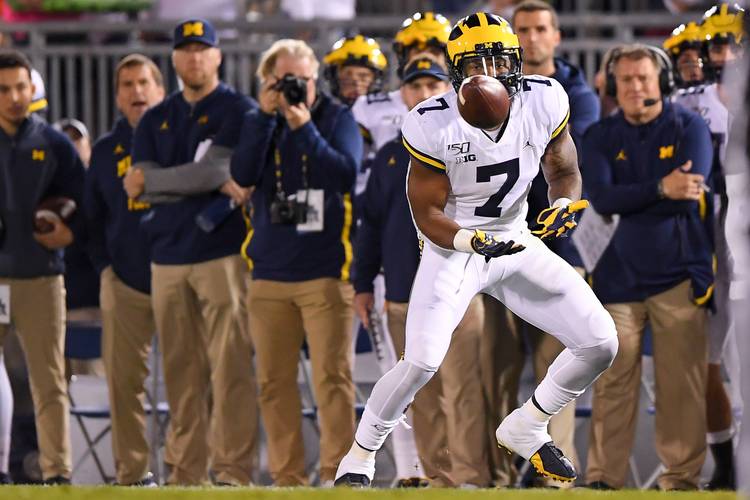 Over the past few seasons, Texas has occasionally turned to graduate transfers in its search for instant offense.

Two years ago, the Longhorns needed a left tackle and depth in its backfield. That led to Rice’s Calvin Anderson becoming a 14-game starter and Cal’s Tre Watson emerging as the leading rusher on a 10-win team. This past season, UT plugged Georgia Tech departee Parker Braun into its hole at left guard.

On Tuesday night, Texas received a commitment from another graduate transfer who could make an immediate impact. Michigan wide receiver Tarik Black announced on both Twitter and Instagram that he’s heading to Austin.

Reportedly, Black is set to graduate after three years at Michigan and will be eligible immediately. He did not respond to a request for comment on Wednesday.

Black was a four-star recruit and a U.S. Army All-American in high school. Due to two separate foot injuries, he was limited to nine games and 15 receptions over his freshman and sophomore seasons in Ann Arbor. Black, though, opened 2019 as a starter and had seven catches in the first two games.

“I’ve never been hurt playing football in my life,” Black told local reporters during an early-season interview. “So it was kind of something new for me and I kind of got a little PTSD from it coming back. But now I think I’m out of that phase, just past that and ready to move forward.”

Black’s season stalled after the solid start. He played in 12 games, but his 25 receptions were tied for fourth on the team. Forty-nine teams averaged more passing yards per game than Michigan’s 250.9 average.

Ranked 30 spots above Michigan last year in passing offense was Texas (289.3 ypg). How will Black fit into Mike Yurcich’s offense? That remains to be seen. Yurcich was hired away from Ohio State this past December to serve as UT’s offensive coordinator.

Texas head coach Tom Herman has said it would be incorrect to think that a new coordinator would “come in and drop a binder on the desk and say this is my offense.” Due to the coronavirus pandemic, however, fans and media members were unable to see Yurcich work with the Longhorns this spring.

Devin Duvernay and Collin Johnson accounted for 47.1% of Texas’ 306 receptions in 2019. No duo in the Big 12 claimed a bigger share of its team’s catches. Among the 65 Power Five programs, Duvernay and Johnson’s percentage of catches was bested by the top tandems at only eight schools.

Duvernay and Johnson, however, were both drafted last week. John Burt is also gone after recording six starts and five catches as a senior.  Texas does return a starter in outside receiver Brennan Eagles, who hauled in 32 passes as a sophomore. Jake Smith and Jordan Whittington are around to battle for Duvernay’s vacated reps in the slot.

Could Black be viewed as Johnson’s replacement? He’s three inches shorter than the 6-6, 220-pound Johnson was, but only five pounds lighter. As a junior, Black started five times and recorded 323 receiving yards. He was used by Michigan as an outside receiver, but a 36-yard touchdown catch against Middle Tennessee was among the plays he made from the slot.

Texas had a qualified backup for the oft-injured Johnson last season in Malcolm Epps, but a conversion to tight end is in his future. Marcus Washington started once as a freshman last year. Additionally, rising sophomore Al’Vonte Woodard was listed behind Johnson and Epps on UT’s depth chart.

Earlier this year, new receivers coach Andre Coleman was asked where Texas will line Eagles up this season. He conceded that the 6-foot-4, 230-pound Eagles will not play in the slot, making it most likely that Eagles will be a factor at one of the outside receiver positions. Coleman, who spent the past season as an analyst for the Longhorns, said, “We want to learn scheme. We want to learn big picture, which means you can play anywhere.” That cross-training in the receiving room could produce more candidates in the competition for playing time.

The Dotted Line: Who are the Austin area’s five best 2021 recruiting prospects in Texas?