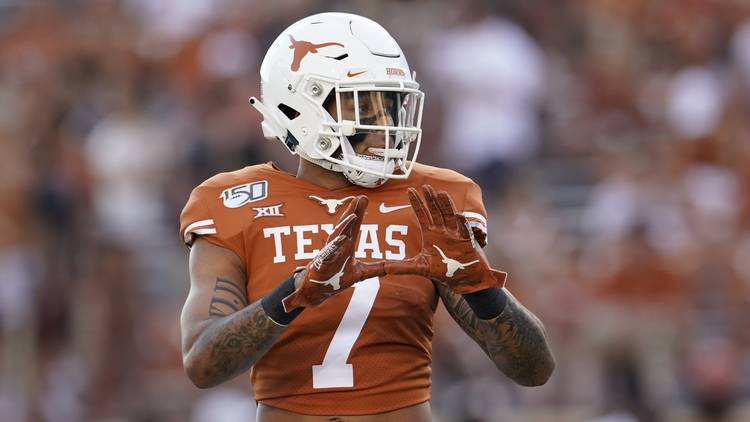 The NFL draft concluded Saturday night with 21 players from the Big 12 finding new homes in professional football. It was the fewest number from any of the Power Five conferences by six players. Five of those 21 prospects were drafted in the first two days, but not a single one played at Texas. The lack of consistency on the field and in the draft by the Longhorns is hampering the Big 12’s perception.

The 2021 draft should be a different story with a loaded group of young players emerging at Texas and around the Big 12. Here’s a look at 20 returning to the Big 12 who could hear their name announced by NFL commissioner Roger Goodell after next season:

Cosmi has started 26 of the past 27 games, earning All-Big 12 honors both years. The 6-7, 310-pound left tackle can also play on the right side. Tackle is the most important position in the draft outside of quarterback and Cosmi should go in the first round.

Oklahoma is no stranger to producing NFL offensive linemen, and Humphrey is next on that list as one of the nation’s premier interior linemen. He can play center, which is invaluable at the NFL level, and can also play either guard position, giving him the positional versatility scouts crave.

Purdy is popping up as a potential first-round draft pick in 2021 on numerous mock drafts. He was a second-team All-Big 12 selection as a sophomore after setting single-season school records in passing yardage (3,892 yards), touchdowns (27), completions (312) and total offense (4,231 yards).

Sterns dealt with nagging injuries as a sophomore following a sensational freshman year that ended with Big 12 defensive freshman of the year honors. He’s NFL-bound with a healthy, consistent junior season. Sterns is a ball-hawk at safety.

Edge rushers are always in high demand early in the draft and Redmond could emerge as the conference’s best pass rusher with more consistency in 2020. He led Oklahoma in sacks (6.5) last year despite only starting in four of the 13 games he participated in.

Wallace could’ve left after the 2019 season, but decided to stick around due to the amount of wide receiver talent in the 2019 NFL draft. He should improve his stock even more with another all-conference season. Wallace has accounted for 2,512 receiving yards entering 2020.

All Hubert does is produce. He was a Freshman All-American and has 11.5 sacks in his two-year career. He led Iowa State with 12.5 tackles for loss and seven sacks as a sophomore, earning first-team All-Big 12 honors.

The speedster from Canada decided to return for his junior season, which is great news for Mike Gundy and the Cowboys. Hubbard was the most explosive offensive player in the Big 12 in 2019. He rushed for more than 100 yards in 11 games.

Perkins was a first-team All-Big 12 selection in 2019 after posting 13.5 tackles for loss and six sacks. He’s poised for a strong junior season and a potential march up draft boards. He’s a hard-nosed defender who likes to stop the run as much as he enjoys sacking the quarterback.

Harvell-Peel proved himself to be one of the best defensive backs in the Big 12 as a sophomore, earning first-team all-conference honors after recording 71 tackles, five interceptions and 13 pass breakups. Players with his versatility and play-making ability are coveted in the NFL.

Anderson was the highest-rated offensive lineman to sign with Texas Tech in the past 20 years and immediately lived up to the billing with Freshman All-American honors by USA Today. He missed his junior season with a shoulder injury, but should be on draft boards come this time next year.

Ehlinger enters his senior season with 33 starts and 36 total appearances. He’s a tough, physical quarterback who has grown as a passer in each of his first three seasons. A big year for him and the Longhorns could shoot him into the second day of the draft.

Texas utilized an odd-man front under former defensive coordinator Todd Orlando, which forced Ossai out of position at middle linebacker. He’ll play on the edge in 2020 and could be the breakout defensive player in the Big 12.

A versatile linebacker who spent time starting in the middle and on the weak-side of the defense. Bernard was a second-team All-Big 12 selection as a sophomore with a team-high 112 tackles. He started two games as a redshirt freshman in 2018.

No player in the Big 12 is more exciting with the ball than Williams, an undersized running back who will likely make his NFL mark by playing slot receiver, third-down back and helping in the return game. He’s the bright spot on a lowly Kansas squad.

Stills doesn’t possess the prototypical frame for an NFL defensive lineman at 6-1 and 282 pounds, but he’s a high-motor player with a love of football. He’s somewhere between a defensive end and a defensive tackle, earning first-team All-Big 12 honors as a junior in 2019.

Kolar was the first Cyclone in school history to be named to an All-American team and an Academic All-American team. He ended the 2019 season with 51 catches for 697 yards and a team-high seven touchdowns.

Wells is a big, physical tight end who impressed with five touchdowns on 17 catches in 2019 despite TCU’s struggles at the quarterback position. He spent time at Northwest Mississippi CC and Milford Academy before enrolling and redshirting at TCU in 2018.

The NFL craves versatile athletes who can play in the defensive backfield and Arnold fits the bill with an aggressive style against the run and in pass coverage. He missed most of his sophomore year with an injury, but bounced back with an all-conference junior season that included 46 tackles and six interceptions.

Following Michigan WR Tarik Black’s pledge, will Texas get a boost from another graduate transfer?

Commitment 101: Jahdae Barron was an unexpected gift for the Texas Longhorns