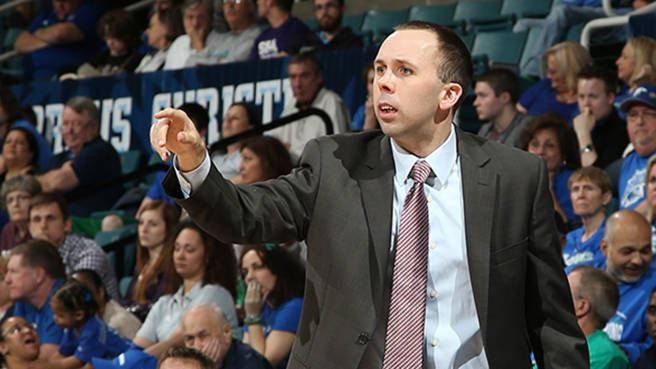 In the summer of 2003 following his freshman year at Texas, Chris Mudge was interviewing for internships with chemical companies.

Mudge, a member of Stony Point’s first graduating class in 2002 and a point guard for the Tigers on the basketball court, planned to become a chemical engineer.

Seventeen years later, Mudge is an assistant coach for the men’s basketball program at Division I Sam Houston State.

Mudge’s story of a fast rise up the basketball coaching ranks is unique, one whose start can be pinned back to that summer.

After his playing days at Stony Point, Mudge still wanted to stay around the game if he could. Given an opportunity, he spent his freshman year helping out in the Texas men’s basketball office doing whatever was needed, like getting coffee and licking envelopes.

While seeking out an internship, the Texas coaching staff — then led by Rick Barnes — asked Mudge to help out with the program’s summer camps.

Leaping at the opportunity, Mudge bypassed his internship plans and eventually was asked to become a full-time student manager.

“I was an average-at-best player, but I really enjoyed the game,” Mudge said. “Kind of like anything, if you love what you’re doing, it becomes addictive. I caught the coaching bug and realized God was telling me this was where I need to be. I quickly changed my major and got into coaching.”

Mudge spent three years as a student manager and then two more as a graduate assistant. He witnessed the careers of players such as future pros Kevin Durant, D.J. Augustin and LaMarcus Aldridge while soaking up as much knowledge as possible from Barnes and the Texas staff.

“I got to be a fly on the wall and be around some of the best guys in college basketball,” Mudge said. “I got involved with video and helped guys with individual workouts. Coach Barnes has been really good to me.”

When he finished with his time at Texas, Mudge landed an assistant job at Midland College on the recommendation of current UTEP head coach and then-Texas assistant Rodney Terry.

Being on the junior college circuit was a polar opposite from Texas in terms of facilities, resources and attention, but Mudge relished the opportunity.

“It was the best thing for me to learn real coaching,” he said. “It was a great experience, and I learned a ton. It also helped that we were good.”

Mudge served as an assistant to two coaches — including current North Texas head coach Grant McCasland — in two years at Midland, where the program made it to the national title game his first season and featured several future Division I players.

On a recruiting trip to Houston following his second year with the Chaparrals, newly hired Sam Houston State coach Jason Hooten called up Mudge about possibly joining his staff.

“The only contact we previously had was talking on the phone about a recruit,” Mudge said. “Unbeknownst to me, (Hooten) and Rodney Terry were friends, and he had put my name out there.”

Mudge said he drove up to Huntsville, stayed up until 3 a.m. talking basketball with Hooten, and the rest is history. Mudge will enter his 11th season with the Bearkats this fall, the program’s longest-tenured assistant, having greatly honed his coaching skills since that summer back in 2003.

“I’ve learned what other tasks are involved at the lower positions because I’ve done it,” he said. “Every place I’ve been and every year I go on, I have learned what it takes to run a program from top to bottom.”

Mudge still has fond memories of his days at Stony Point, where he played on a team his senior year that spent most of the season in the state rankings.

“A couple of the big games we played really stand out,” Mudge said. “We beat Westlake when they had (future Texas Longhorn) Brad Buckman, and we were both state-ranked at the time. We beat Belton when they had two really good players. … There’s a lot of good memories from just being around the team. I played with a lot of really talented guys, and my job was to get them the ball.”

Still several years shy of 40, Mudge has made an impressively fast rise up the coaching ranks.

He’d like to take one more step up the ladder in the near future.

“Obviously God has a plan, but I’d love to be a head coach and run my own program and use the things I’ve learned from the many great coaches I’ve been around,” he said. “I think it’s a goal of every coach to see if you can do it.”