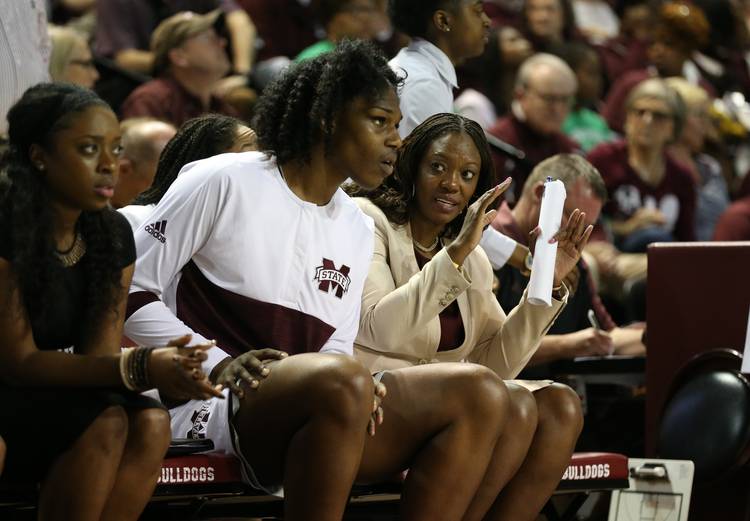 Mississippi State associated head coach Johnnie Harris interviewed for the Bulldogs' opening when Vic Schaefer left for Texas, but when the Bulldogs went another direction, she followed him to Texas. (Kelly Price/Jackson Clarion-Ledger)

She had never envisioned herself as a longtime resident of the Magnolia State. But as she entered her eighth year as an assistant coach at Mississippi State, it was time. So she found a place in the city that boasted an acre of land and a pool.

It was announced last month that Harris would be following former Bulldogs head coach Vic Schaefer to Texas. She will retain her title as an associate head coach in Austin. On Wednesday, during a 30-minute interview with local media, Harris called Texas “an opportunity that you just can’t turn down.”

“We feel like (Texas) is one of the top programs in the country,” Harris said. “The future there at Texas with us, we believe, is just huge. We feel like we can go there and win championships.”

The 2018 WBCA national assistant coach of the year, Harris has developed a reputation on the recruiting trail. She said UT will recruit system-fitting prospects who have an offensive touch and are “hard-nosed, physical, aggressive.” Those searches will start within the state, but Texas won’t be afraid to look nationally, she said.

Since Schaefer was hired on April 5, Texas has brought in transfers from Duke guard Kyra Lambert and Penn State center Lauren Ebo. Incoming freshman DeYona Gaston joined the Longhorns after Mississippi State released her from her letter of intent. Aaliyah Moore and Rori Harmon, both considered top-20 recruits in the 2021 cycle, have committed in the past couple of weeks.

“(Harris) was very patient with me,” McCowan told 247Sports in 2019. “She took her time and didn’t get fed up. She took it day-by-day and knew that I never had any kind of pro training or anything like that for my skills. She took her time with me.”

At Texas, Harris inherits an all-conference post in rising junior Charli Collier, who led Texas with 13.1 points and 10.5 rebounds per game. That was only the fourth time that a Longhorn has averaged double-digit points and rebounds while playing in most of the team’s games.

Harris wasn’t ready to buy the comparisons that she’s heard between the 6-5 Collier and the 6-7 McCowan, who was the third overall pick in the 2019 WNBA draft. McCowan, Harris assessed, was more physical. Collier can play inside, but her ability to pass and shoot — she knocked down 28 3-pointers this past season — could result in UT using its tallest player at the 4 spot.

In addition to Harris, Schaefer also got Mississippi State assistants Dionnah Jackson-Durrett and Elena Lovato to rejoin him in Austin. When announcing his hires, Schaefer referred to his staff as “the A-Team. They’re the best in the business.” Harris was the last to commit to her new gig since she was in the running for the vacancy at Mississippi State.

Mississippi State eventually hired Old Dominion’s Nikki McCray-Penson to take over a Bulldogs program that reached the NCAA championship game in 2017 and 2018. Harris had never before interviewed for a coaching job, but Mississippi State athletic director John Cohen told her that her candidacy was taken seriously. She surmised that the McCray-Penson hire was made because Mississippi State was looking for someone with head coaching experience.

Harris said she has been approached by smaller schools looking for head coaches in the past. Those jobs don’t interest her, however. She has spent the past 17 seasons working at Mississippi State, Texas A&M, Arkansas and North Carolina State. She was part of the Aggies’ NCAA title team in 2011.

“I love competing at this top level,” Harris said. “Coach Schaefer lets me coach. He lets me do everything a head coach does. He’s prepared me, but in order for me to make that move, it would have to be the right situation.”