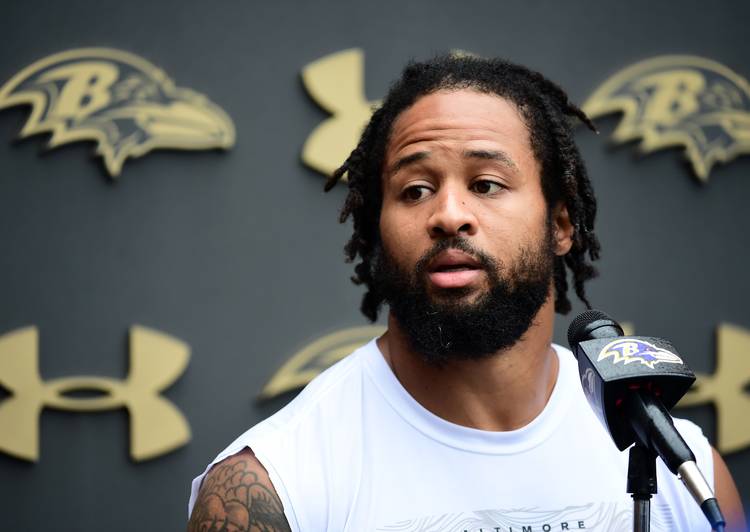 The wife of NFL star and former University of Texas standout Earl Thomas pointed a gun at him last month when she found him in bed with another woman, according to an Austin police report.

Thomas is listed as the victim in the domestic violence incident. His wife, 30-year-old Nina Thomas, was arrested after she told police she pointed a loaded weapon at her husband’s head when she found him in bed with a woman.

The incident, first reported by TMZ, happened early in the morning of April 13 at a rental home in the 600 block of Brushy Street in East Austin. Police say found Thomas’ wife chasing her husband in the parking lot with a knife, an arrest affidavit stated. Earl Thomas was carrying a pistol, which police determined he had taken from his wife.  Police said Nina Thomas had entered the home to confront her husband about cheating.

Police ordered the Thomases to the ground and to drop their weapons, and the couple complied, the affidavit states.

Court records show Nina Thomas posted $25,000 bail and was released from jail later in the day. An emergency protective order states she cannot have contact with Earl Thomas or the woman found with Earl for 60 days. Nina Thomas in bail paperwork listed her address as a West Austin estate appraised at $3.5 million that she and Earl purchased in 2018.

Houston lawyer Jonathan Goins, who is listed as the attorney of record for Nina Thomas, issued a statement Thursday saying his client was wrongfully arrested.

“We have already gathered information which controverts every single allegation made on the night in question,” Goins said. “We have begun working with the Travis County District Attorney’s Office to ensure that these charges do not stick and Mrs. Thomas’s pristine name is cleared.”

Nina Thomas is set to appear in district court on June 8 for an initial setting in the case.

Earl Thomas, who turned 31 Thursday, was not charged in the incident. He released a video Wednesday night on social media addressing the incident.

“Instead of talking about us, just keep us in your prayers,” Thomas said. “Stuff like this happens. We try to live the best lives we possibly can but sometimes it don’t go as planned. Just pray for us as we go through this stuff.”

Ravens Safety Earl Thomas was held at gunpoint by his wife after he reportedly cheated on her. Here’s Earls response pic.twitter.com/lvmu0aCg3Z

Thomas, a safety with the Baltimore Ravens, is a seven-time Pro Bowl selection and considered one of the top defensive players in the NFL. He won a Super Bowl after the 2013 season with the Seattle Seahawks, which drafted him in the first round out of the University of Texas in 2010.

The Ravens in a statement Thursday said, “we became aware of the situation when we read and saw it on the reports late last night and early this morning.”

Thomas told police that, on the afternoon before the confrontation, he and Nina had an argument about him drinking too much alcohol and he left their home. He said he called his brother to pick him up and the two went to the downtown rental home to watch TV with two women — including one whom Thomas told police he had been seeing for three or four months while he worked on his relationship with Nina.

Earl Thomas, according to his wife’s affidavit, was awoken in bed with the other woman at around 1 a.m. when Nina entered the room and pointed a black pistol at him. Nina largely corroborated the events, telling police she put the gun to her husband’s head to scare him. Police say Nina told them she removed the magazine thinking the gun could not fire but was unaware that the gun had a round in the chamber. Nina, according to police, admitted to disengaging the gun’s safety.

Nina told police she tracked her husband’s whereabouts to the rental home through his Snapchat account, which showed several videos of Earl with the other woman. Two women who Nina brought to confront her husband were also taken into custody: her sister, Kayla Baham-Heisser, 24, and her friend Camisha Garlow, 28, the ex-spouse of Earl Thomas’ brother, Seth, who was with the football player at the rental home.

Baham-Heisser took video of the incident with her phone that police reviewed. The video, according to police, shows Earl Thomas at the top of a staircase with Nina placing the gun within a foot of his head with her finger on the trigger. Nina struck Earl in the nose before the video ended, police said. The video also showed Garlow attempting to attack a woman who was in the home with Seth Thomas.

Texas’ Joseph Ossai on his unshakable belief: ‘I want to win a national championship’