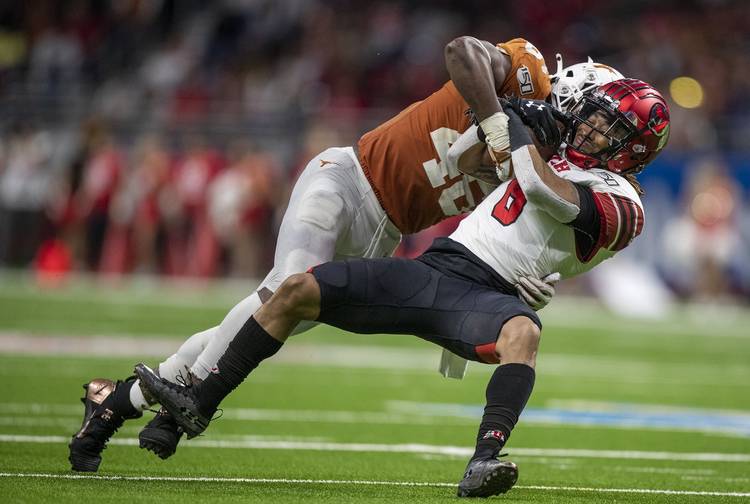 There’s a guitar sitting in Joseph Ossai’s apartment, courtesy of his friends from church. Time to start strumming the quarantine blues.

“I brought it back, I looked at it, it looked at me and (I) thought maybe this is the time,” Ossai said. “But my fingers are too fat and I got frustrated with that.”

All you need is three cords and the truth.

Ossai, one of Texas’ defensive leaders, already has the latter down pat.

Forget about any preseason accolades, which are sure to come. Forget about those NFL mock drafts that have Ossai pegged to go early next spring. A sure-fire team captain believes 2020 has to be the year the Longhorns break through.

Strong stuff, for sure. Texas hasn’t even won the Big 12 since 2009. The Horns have been in conference title contention only twice since then — 2013 and 2018. And it’s early May, so it’s OK to dream big. Still, Ossai talks with an unmistakable passion that’s hard to dismiss as empty bluster.

Look at what LSU did, Ossai said. Look at that roster and what the Tigers achieved last season. It can happen in Austin, too, he believes.

“I’m sure everybody feels the energy and the excitement and the anticipation coming into it,” Ossai said, “but we’ll have to wait and see.”

Expect to hear from Ossai throughout the season, whenever it begins. He’ll likely be a weekly interview staple in the Centennial Room and a weekly menace on the field.

Ossai sure made a mess of those Utah Utes. Defensive coaches went with a new look, moving him to an edge pass rusher. Texas had no consistent pass rush from its three-man front last season, so a new four-man look was a welcome sight.

Ossai had a team-high nine tackles and three sacks, fueling coach Tom Herman’s belief that a four-man front was the right path forward.

Under new defensive coordinator Chris Ash, both Ossai and Byron Vaughns are moving from linebacker to a hybrid defensive end position called the “jack.” Ossai is 6 feet, 4 inches tall with lengthy arms, and his reach will help ward off offensive tackles and get through the line of scrimmage.

Why wasn’t Ossai tried off the edge before? He was one of Todd Orlando’s biggest supporters. UT’s former defensive coordinator is now at USC, although they still keep in touch through texts. “That’s what you realize, this is a business, and you’ve got to roll with what you’ve got,” Ossai said.

Veteran defensive line coach Oscar Giles and Mark Hagen, a newcomer to the staff but no spring chicken, are both working with the defensive front going forward.

“I think the new coaches, they’ve brought new ideas and a brand new way of looking at things with the defense,” Ossai said. “Fans can expect to see us be more explosive on the D-line.”

Something had to change after last season, either the personnel or the scheme. The Horns were sixth in the Big 12 in sacks (27) and third in rushing defense (138.9 yards allowed per game). Those numbers don’t look terrible in print, but they mask how easy a time opposing quarterbacks had it.

Texas had the league’s second-worst pass defense. Injuries were a huge, season-long problem in the secondary. But the Horns also couldn’t get pressure on the quarterback and simply make him move around. Often times, average Joes looked like Davey O’Brien.

“The elite teams always have a good D-line, period,” Hagen said in February. “You might be great at linebacker and great in the secondary. But if you don’t have guys in front of you that can create negative yardage plays in the run game and make the quarterback uncomfortable … that’s what our charge is up front to get our guys playing consistent.”

Ossai will try just about anything. His family came to the United States from Nigeria by winning a spot in the Diversity Visa Lottery program. Ossai was introduced to football in the seventh grade and wanted to play receiver. Only trouble was his coordination, or lack thereof.

One day at practice, a coach barked for someone to play defensive line. Ossai, the nervous middle schooler, ran into the fray and never looked back.

Ossai now has two years under his belt at UT and 15 career starts. He’s made 110 tackles and six stats, but those came at linebacker. Going forward, Ossai’s numbers may look different — better or worse — but his primary role is to be a disruptor.

Even Herman acknowledged in February, “As far as Joe’s ceiling, yeah, the sky’s the limit.”

Obviously, the coronavirus stopped Ossai and the Longhorns’ momentum. He’s been one of several Horns working out in quarterback Sam Ehlinger’s garage. Ossai, defensive tackle Ta’Quon Graham and defensive backs Caden Sterns and Josh Thompson have been working out with the UT signal-caller.

“It’s challenging, I’ll tell you that,” Ossai said. “In times like this, you have to find ways to grow.”

Texas players will get through online courses the next few weeks and transition into a summer regimen. It’s still unclear when the athletic facilities will reopen. So all Ossai can do is dream.

Maybe he’ll pick up that guitar again, try some “Cat Scratch Fever.” He’ll get to scratch that football itch eventually.

“I felt like we had a great offense and great defense last year. But it wasn’t,” Ossai said. “The only thing is we’ve got to go back to the drawing board and work harder.”