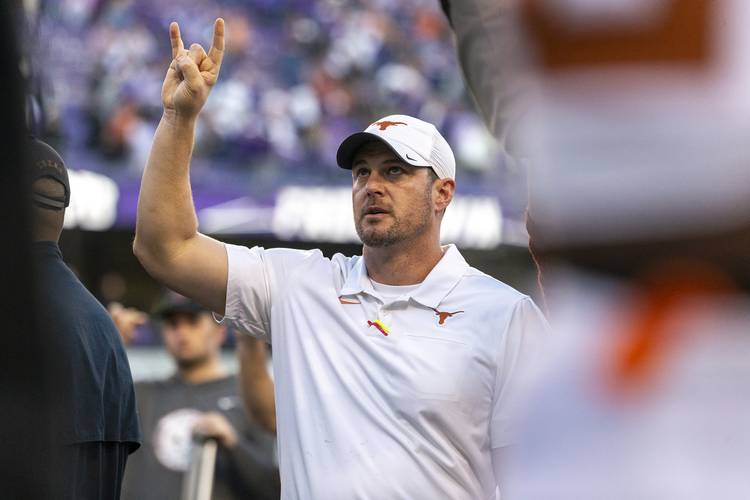 Texas’ 2021 class grew to nine members Sunday morning when three-star outside linebacker Morice Blackwell pledged to the Longhorns over offers from Alabama, Georgia and a dozen other Power Five schools. Texas’ class now ranks 12th in the nation and first in the Big 12 with Blackwell becoming the third pledge in the past four weeks.

Texas’ next commitment could come Friday as three-star Hallettsville running back Jonathon Brooks announced the date of his announcement. Tom Herman and running back coach Stan Drayton feel confident that Brooks winds up in burnt orange. Texas is among Brooks’ top offers and is a potential hidden gem for Drayton to mold.

Texas plans to sign two running backs with Drayton hoping to pair Brooks with either LJ Johnson of Houston Cypress-Fairbanks or Camar Wheaton of Garland Lakeview Centennial. They are the top two-rated running backs in Texas for the 2021 cycle and Drayton knows continued depth must be added to a position that is suddenly a strength for Texas with Keaontay Ingram, Roschon Johnson and five-star freshman Bijan Robinson. Ingram can declare for the NFL draft after the 2020 season.

Brooks is a 6-0, 185-pound athlete with versatility. He’s the 49th-ranked running back in the 2021 cycle, per 247Sports’ composite rankings. He was a first-team all-district selection as a sophomore and the District 14-3A Division I MVP as a junior. He’s a running back who can also help in the passing game and on special teams.

Blackwell became Texas’ second linebacker commit, but that doesn’t mean new defensive coordinator Chris Ash and his staff are done adding to the ranks. Linebacker is the biggest question mark on the current defensive roster and the way to fix that long-term is through recruiting. Blackwell and four-star Derrick Harris Jr. are a nice start, but adding Texas High four-star Clayton Smith would give the group star power.

Smith is the 23rd-ranked player on the Fabulous 55. He’s the eight-ranked outside linebacker in the entire 2021 cycle according to the 247Sports composite. The 6-3, 220-pound playmaker included Texas among his top six schools alongside Oklahoma, LSU, Kentucky, Florida State and Oregon. Smith recorded 20 sacks as a junior and is a three-sport star who also participates in basketball and track.

Smith’s ability to rush the passer, coupled with a 6-4 frame, makes a move to defensive end possible if his body continues to fill out. The Longhorns plan to utilize a 4-2-5 look, which may mean an edge rusher with Smith’s ability gravitates toward defensive end, much like current UT star Joseph Ossai. The Longhorns also want outside linebacker Terrence Cooks of Alvin Shadow Creek.

The Longhorns joined the recruiting party late for Harmon, a four-star cornerback from Denton Guyer, but that didn’t keep Texas from making the cut as one of his seven finalists alongside Texas A&M, SMU, TCU, USC, Oregon and Notre Dame. Many recruiting experts expect the Harmon recruitment to become a two-team race between the Longhorns and the Aggies. Harmon possesses a longer relationship with the A&M staff because of the changes at Texas and the late offer.

Harmon is undersized at 5-9, but he plays bigger with solid leaping ability, long arms and an aggressive style. He could also move to safety or nickel at the college level, and coaches love versatility within their secondary due to the spread offenses taking over every conference in the country. Harmon helped Denton Guyer reach the Class 6A Division II state championship game as a junior, earning first-team all-district honors. He was the District 5-6A newcomer of the year as a sophomore.

Commitment 101: Outside linebacker Morice Blackwell is a tackling machine