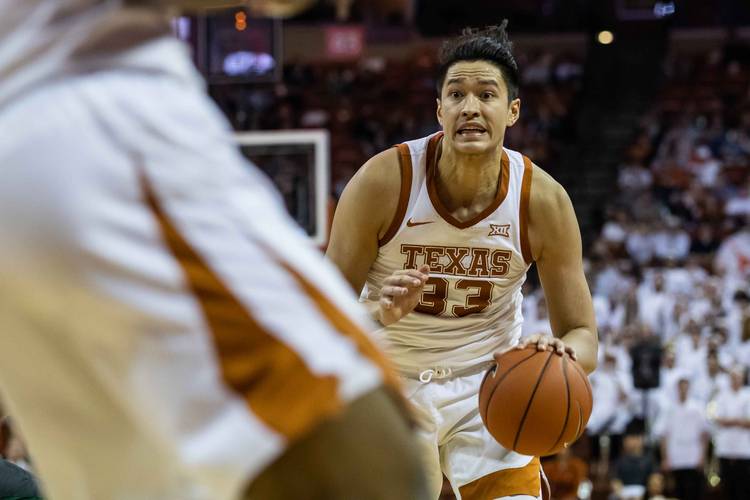 Thursday was a halfway decent day in Barrow, Alaska. Temperatures were in the mid-20s. Should get up to 27 this weekend, too.

Texas forward Kamaka Hepa went back home for spring break and ended up staying put, courtesy of the coronavirus pandemic. Like other Longhorns, he has plowed through the rest of the spring semester online and struggled to stay in shape.

“It’s been really tough, actually,” Hepa said on Thursday. “The gyms up here have been closed pretty much the whole time.”

What’s an Alaskan athlete doing with all this free time? Next week, Hepa starts training to become an EMT with an internship at a local firehouse. First lesson is CPR training, always a handy skill.

It’s only 3,569 miles from Austin to Barrow, as the crow flies. Sounds like UT coach Shaka Smart should ship the whole team up there to work with the locals.

Whaling isn’t for wimps, though.

“It’s definitely very difficult. So I’ll just kind of run you through it,” Hepa told reporters on a Zoom chat.

“How it works here is that there are a number of whaling crews that make up the whaling community,” he said. “And basically what those crew are big groups of families.”

“These crews start with them breaking trail,” Hepa described. “And what that consists of is they’ll take their snow machines, their sleds, their tents and everything like that, all the materials that they need and then they’ll go out onto the ocean.”

Like learning everything in Cooley Pavilion and then traipsing out into the Big 12.

“The ocean right now is covered in ice,” Hepa said. “So there’s these big icebergs everywhere. It’s kind of uncharted territory at the time. And so that’s what they’re doing. They’re breaking trail and kind of making this trail from the shore all the way out to open water, where the whales actually are.”

Every game presents its own opportunity, as Smart is wont to say. So does every whale. The crews then ride out on smaller, eight-seat, seal-skin boats — harpoon always at the ready.

“Once they’ve gotten the whale, they have to actually pull it out of the water onto the ice by hand,” Hepa said. “I would say that’s definitely the toughest part.”

There’s all manner of fish off the Alaskan coastline. Narwhals weigh about 2,000 pounds. Beluga whales typically weigh about 3,000 pounds. Killer whales can get up to 10,000 pounds while humpbacks can be in the 60,000-pound range.

“When a whaling crew catches a whale, all the whaling crews around it will go to that specific camp,” Hepa said. “And they’ll help like pull it up because you have to pull up by hand.”

Life’s different in Barrow, that’s for sure. But it’s also one that’s come to a screeching halt because of the pandemic. “We actually have zero confirmed cases. So that’s good,” Hepa said.

So it’s 20-something degrees outside, and the gyms have been closed for two months.

“A lot of the time that I spend when I’m not like doing school or working out, I’ve been snowmobiling,” Hepa said. “Riding around on snow machines. I’ve been doing a little bit of snowboarding, too. So just do things that I did as a child really.”

That’s simply what you do growing up in what Hepa calls a “small village.” Nobody tell Shaka.

Just getting home is a story in itself. Hepa said he can take a midday flight from Austin to either Seattle or Portland. That’s at 4 1/2 hours. Then after a layover, he flies to Anchorage, Alaska, and usually has to spend the night because of the flights schedules and travel time.

The next day, Hepa flies to Barrow, completing the journey. It’s quite different from those who can shoot up to Dallas on Interstate 35 or scoot down to Houston, stopping for kolaches in La Grange.

All those hours in transit give you plenty of time to think. Hepa reflected on his season and how the Horns won five of their last six. UT was set to face Texas Tech in the Big 12 tournament quarterfinals only to be called off the floor 45 minutes to tipoff, and the season was over.

“It kind of felt unreal, and honestly it didn’t kind of kick in until I was home and was told that I would be home for a long time,” Hepa said.

Now he’s got plenty of time to think about the future, too. Texas returns 12 players from last year’s team and adds sensational freshman Greg Brown III. Playing time won’t be given out so freely next season, so Hepa must find a way to make an impact.

“A lot of us are very hungry to be better basketball players,” Hepa said.

Swindell recalls Texas, MLB career — and the day he signed his scholarship on the hood of a pickup truck