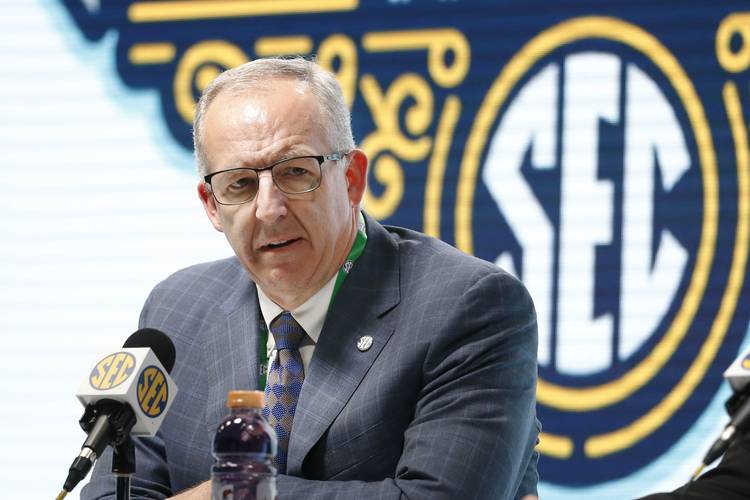 Southeastern Conference Commissioner Greg Sankey speaks at a press conference in March. The Power Five conferences spent $350,000 on lobbying in the first three months of 2020, more than they had previously spent in any full year, as part of a coordinated effort to influence Congress on legislation affecting the ability of college athletes to earn endorsement money. [Mark Humphrey/The Associated Press]

The Power Five conferences spent $350,000 on lobbying in the first three months of 2020, more than they had previously spent in any full year, as part of a coordinated effort to influence Congress on legislation affecting the ability of college athletes to earn endorsement money.

The Southeastern Conference was the biggest spender, hiring three lobbying firms and paying them a total of $140,000, according to lobbying disclosure forms reviewed by The Associated Press. Before this year, the SEC did not employ Washington lobbyists, instead leaving the work of influencing Congress to individual universities and the NCAA.

In a statement to AP, SEC Commissioner Greg Sankey said the conference hired lobbyists so it could be part of the discussion as Congress gets more serious about reforming college sports.

“It is important for the SEC to have a voice in this national dialogue,” Sankey said. “We look forward to a constructive exchange of ideas about ways we can further enhance our student-athletes’ educational and athletic experiences while ensuring that any future changes can be administered fairly on a national level.”

The NCAA announced last month it was moving forward with a plan to allow college athletes to earn money for endorsements and other activities including personal appearances and social media content. California and other states have passed laws that would that would guarantee that right to athletes with few of the restrictions the NCAA is seeking. Florida could be the first to have its law take effect, starting next year.

RELATED: Bohls: Athletes are getting a break — and a check

The NCAA is pushing Congress for a federal law that would render those state laws moot and perhaps stave off future legal challenges.

Conference commissioners have spoken about a chaotic recruiting environment that would result from a handful of states passing athlete-friendly laws and schools using them to entice the best players.

At a hearing in February, NCAA President Mark Emmert said Congress needs to put “guardrails” on athletes’ ability to earn money, in part to protect against potential recruiting abuses and endorsement money being used as a pay-for-play scheme. That argument was met with skepticism by some lawmakers and athlete advocates, who believe scholarship athletes should have access to the free market like any other college student.

The NCAA’s lobbyists have continued to press the case for those guardrails, and now they have more help. A document circulated by the Power Five lobbyists, obtained by AP, lists the conferences’ “core principles” for athlete compensation, and most of those principles include limitations.

They include: a requirement for “one term of academic progress” before athletes can sign endorsement deals; a ban on athlete deals with “advertising categories inconsistent with higher education”; and limits on who can advise athletes on third-party contracts to prevent “unscrupulous actors.”

Each of the Power Five hired the same two lobbying firms this year, and each of those firms collected $10,000 from each conference. The firms — Marshall & Popp, led by ex-Republican congressional staffers; and Subject Matter, led by Democrats — both stated as their objective a “national solution to preserve the unique model of American college athletics” while allowing players to earn money from their names, images and likenesses.

“In this particular case, the (Power Five) conferences are working together on this so that there’s less confusion, not more, in terms of the messaging to congressional leaders that helps explain NIL and what the concerns are, and how it might work,” Atlantic Coast Conference commissioner John Swofford told The Associated Press.

The ACC and the Big 12 each spent $60,000 — $40,000 on their own lobbyists and $20,000 on the Power Five firms. Both conferences had the same lobbyists last year, the first year either had spent significant money to influence members of Congress.

Last year, the NCAA spent $450,000 on lobbying, the most it has spent in any year since 2014, and it continued at that accelerated pace by spending $130,000 in the first quarter of this year, records show.

Rep. Mark Walker, a North Carolina Republican and an outspoken NCAA critic who has introduced legislation on the topic, said the NCAA and its allies were “tone deaf” for spending money on lobbying to limit the earning power of athletes during a pandemic that has wrecked the U.S. economy.

“You’ve got millions of Americans struggling. Close to 500,000 student-athletes have had practices and competitions canceled, and they want Congress to drop everything and give them some kind of legal backdrop, cover, after decades of abuse,” Walker said.

The coronavirus pandemic, however, has not stopped the debate over athletes’ pay, either in Washington or in statehouses. Swofford said he expected the Power Five to continue to have a lobbying presence.

“With the potential financial implications that come with the pandemic, I think any and all expenditures will be considered,” Swofford said. “But this is also a very important issue in terms of the future of college athletics and what it looks like.”