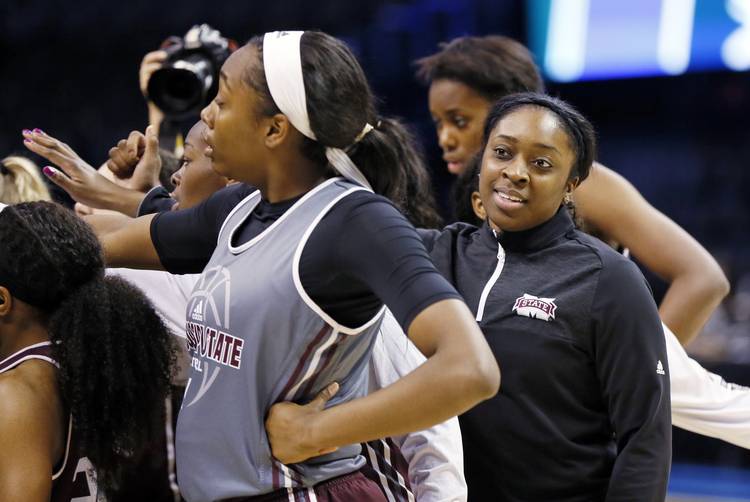 After five years at Mississippi State on coach Vic Schaefer's staff, Dionnah Jackson-Durrett came to Texas with Schaefer after his hire earlier in the year. Jackson-Durrett will mentor guards as the associate head coach. (Nate Billings/The Oklahoman)

Over the course of her basketball career, Dionnah Jackson-Durrett has traveled to Austin plenty of times.

In February of 2002, Jackson-Durrett came off of Oklahoma’s bench and played 41 minutes in an overtime loss to the rival Longhorns. She returned to the Erwin Center with the Sooners in each of the next three seasons. Winless on UT’s court as a player, Jackson-Durrett finally savored a win in Austin in 2018 as a member of Mississippi State’s coaching staff.

This week, Jackson-Durrett once again journeyed to Central Texas. This, though, was a one-way trip. Hired last month as an associate head coach on Vic Schaefer’s bench at Texas, Jackson-Durrett completed her move to Austin on Tuesday.

“I’m really excited to start this new job,” Jackson-Durrett told the American-Statesman. “I’m just ready to be on campus and get to work and see what this new challenge brings.”

How did Jackson-Durrett, 37, end up on a 700-mile road trip from Starkville to Austin with her mother and young daughter? (Her husband, Jon, “got out of packing” since he’s currently attending a training school in Wyoming). Well, that story was years in the making.

Eighteen years ago, Jackson-Durrett was no longer a role player on a senior-laden team that reached the Final Four for the first time in Oklahoma’s history. She was instead an experienced sophomore who revered her head coach, Sherri Coale. And Coale needed Jackson-Durrett to step up as a leader and on-court instructor that winter following an injury to senior Caton Hill.

Thus a seed was planted. Jackson-Durrett went on to become a three-time all-conference honoree and WNBA draft pick whose 606 career assists rank third at Oklahoma. After her overseas career wrapped, Jackson-Durrett took a coaching job with Southeast Missouri State in 2010.

“I would say the development of young guards but point guards in particular (was her strength),” said Milleson, who first took note of Jackson-Durrett while coaching against her high school team in St. Louis. “I know she helped us a lot with the defensive end too.”

Early in her coaching career, Jackson-Durrett admittedly tried to coach as if she was still the team’s point guard. She was demanding but lacked empathy and understanding. Assists were easier to dish out than praise was.

Years later, Jackson-Durrett concedes that “you can’t do that.” She insists her players will still vouch that she’s demanding but has added a loving touch.

A lot of that professional growth occurred during her five years with Schaefer at Mississippi State. Jackson-Durrett mentored guards Jazzmun Holmes and Morgan William in Starkville, and the Bulldogs compiled their three best single-season assist totals under her watch. Mississippi State also reached the NCAA championship game twice. One of those trips to the NCAA’s finale was booked on William’s 2017 buzzer-beater against Connecticut.

“Dionnah has been instrumental in the success of our program,” Schaefer said in 2019. “Our team has gone to unprecedented heights the past few years, and part of that is a credit to Dionnah for her ability to develop point guards along with her involvement in recruiting.”

In interviews since her hire at Texas, Jackson-Durrett has not minced words. She wants to win now. Even though Texas is coming off a disappointing 19-11 season, Jackson-Durrett assessed that “I think this team is really good, I think they’re ready.”

With Sug Sutton now in the WNBA, Texas must find a new starting point guard. From what she’s seen on film, Jackson-Durrett says she likes the toughness and mental makeup of the position’s candidates. The Longhorns signed Duke graduate transfer Kyra Lambert after Schaefer’s hire, and Jackson-Durrett inherited rising junior Joanne Allen-Taylor and incoming freshman Ashley Chevalier from the previous regime.

Last season, Texas averaged 16.1 turnovers per game. There were 193 Division I teams that were better at holding onto the basketball. In fact, UT last cracked the top-100 on the NCAA’s turnover leaderboard during the 2004-05 season. Mississippi State, meanwhile, was ranked between third and 31st in turnovers-per-game in each of the past four seasons.

For Jackson-Durrett, practice makes perfect when it comes to limiting turnovers. The Longhorns will find out which passes they can and can’t make during their periods of preparation. Make no mistake, the players will run in practice for turnovers. The coaches, however, are banking on the installation of muscle memory.

“Passing is about confidence,” Jackson-Durrett said. “I encourage them to take those risks in practice but you know at the end of the day that there’s a consequence for turning it over. Embrace it, come back and let’s go to work.”

On its website, Texas refers to Jackson-Durrett as “one of the top young coaches in the nation.” She has a goal of becoming a head coach one day.

“I think Dionnah will wait for the absolute right, perfect fit because she’s got such a good situation now,” Milleson said. “Absolutely, I think she’ll be a head coach and a great head coach some day.”