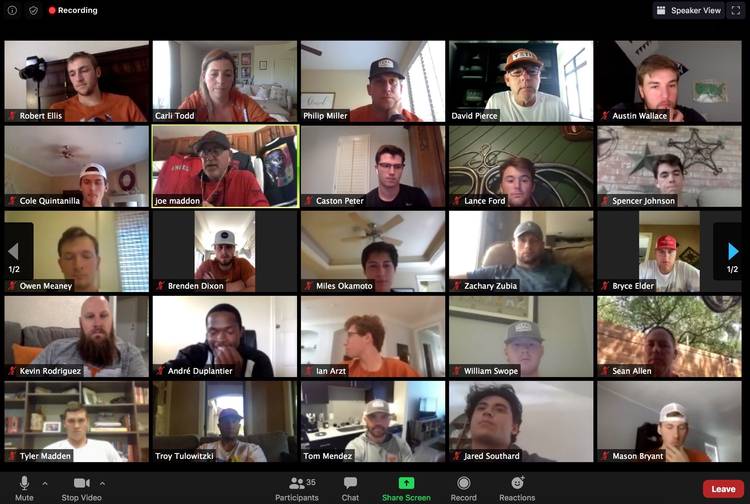 Like many, Texas freshman Andre Duplantier II hadn’t really heard of Zoom a couple of months ago.

But ever since his spring semester was upended by the coronavirus pandemic, Duplantier has become quite familiar with the video conferencing service. The platform has served as a virtual classroom for three of his courses. It has hosted meetings for a baseball team that used Duplantier as a relief pitcher and infielder this spring.

Through Zoom, Duplantier and his teammates have also participated in meet-and-greets with some of the biggest names in baseball. Over the past month, major leaguers ranging from Angels manager Joe Maddon to Rockies all-star Nolan Arenado have accepted invitations to speak to UT’s players and coaches.

“They’re all really good at what they do,” Duplantier said.  “To just be able to listen to them and listen to their answers with different baseball questions and get a feel for the way they think about things was really beneficial to me.”

Texas was only two days removed from a 9-1 win over Abilene Christian when its season was called off on March 13. That decision wiped 38 games off the schedule. The Big 12 tournament, which was scheduled for this week, was canceled. The NCAA’s postseason became an afterthought for a 14-3 team.

UT coach David Pierce was suddenly tasked with finding ways to keep his players engaged. The Longhorns were now in offseason mode during a time in which they expected to be playing. The summer and fall seasons were also no longer a guarantee.

Pierce was initially hesitant about the idea of bringing in guest speakers. But when Carli Todd, the program’s director of player development, brought up the idea of landing Maddon, Pierce said it was a “no-brainer.” Todd and Maddon had previously worked together in Tampa Bay.

Maddon chatted with the Longhorns on April 28 about establishing a team identity and his five levels of ballplayers. Pete Hansen asked Maddon to pick one of his former players to pitch in a hypothetical Game 7, and the freshman pitcher then received an explanation about why Maddon’s answer was Jon Lester.

“I can apply that to my game and what big-league managers look for in the high-pressure situations,” Hansen said. “I thought that was pretty cool to talk to Joe Maddon about that.”

Following Maddon’s talk, Texas worked its connections and set up a circuit of speakers. Dodgers executive Andrew Friedman talked to the Longhorns about preparation and scouting prospects. Arenado answered questions about hitting. Pittsburgh pitcher Chris Archer has been scheduled for Tuesday.

This Wednesday, Texas hosted former Astros manager A.J. Hinch. Admittedly, Pierce said this booking had “a little bit of interesting kickback going into that.” Hinch won a World Series with the Astros in 2017, but he was also fired and suspended this winter for his role in the franchise’s sign-stealing scandal.

During the discussion, Hinch was asked directly about the scandal by UT senior Austin Todd. Pierce believed that Hinch was upfront and transparent with his answers.

“I think that you can learn by other people’s mistakes as well as just their successes,” Pierce said. “A.J.’s a great baseball man, he made some mistakes.”

Hinch also went in-depth on baseball and analytics. Pierce said he appreciated Hinch’s message of “being comfortable in uncomfortable situations.” A former catcher, Hinch answered a question from freshman Silas Ardoin about on-field demeanor. He had a response for Ty Madden’s inquiry into ace pitcher Gerrit Cole’s development.

“Just a lot of interesting things that I think were prevalent to young players that have goals, not only here but in their future,” Pierce said.

Texas is still awaiting guidance from the NCAA on how it can handle meetings after this month. Even if Texas can’t reserve any additional speakers, the coaches believe they have received validation. Before Arenado spoke on Friday, Pierce remarked that “there’s not one thing that any (of the) three guys up to this point has said that our players haven’t heard.”

“I think it’s shown us that we have really good coaches,” Duplantier said. “Our coaches are telling us some of the same things those guys are getting on Zoom and telling us.”