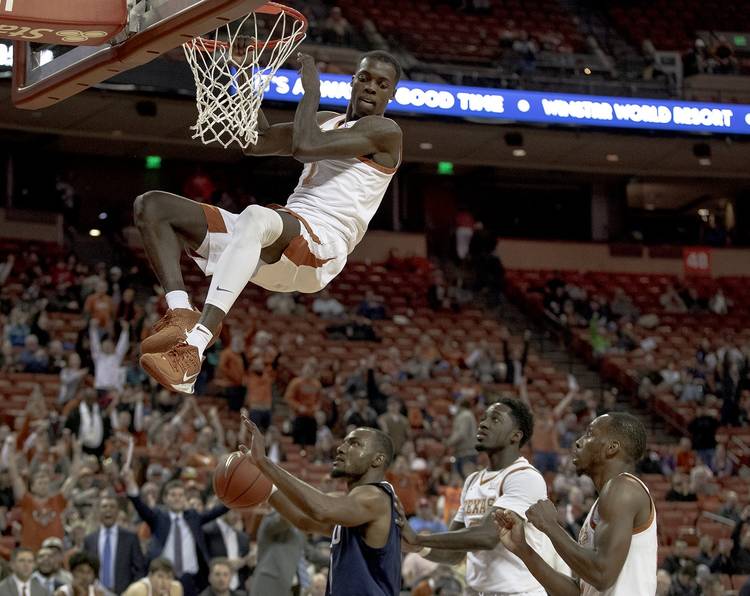 Texas basketball player Andrew Jones has been named the Big 12’s male sportsperson of the year, the conference announced on Wednesday.

Since the 2000-01 school year, the Big 12 has annually honored athletes who display “an extraordinary degree of sportsmanship, community service and academic achievement.” Jaci Jones, a three-year captain on Oklahoma State’s soccer team, was this year’s female recipient.

“Our entire Texas Basketball family congratulates Andrew on this well-deserved honor,” Texas head coach Shaka Smart said in a statement. “His courage, strength, and resiliency have served as an inspiration to so many. It has been especially rewarding to see Andrew’s positive impact extend well beyond the basketball arena. What’s equally exciting is the fact that Andrew continues to grow and develop, both on and off the court. The best is yet to come.”

Wednesday’s news adds another chapter to Jones’ inspiring story. He was diagnosed with leukemia during the 2017-18 season. He missed most of that season and all but two games of the 2018-19 campaign as he went through chemotherapy treatments.

He returned to the court as a redshirt sophomore this winter. In UT’s opener against Northern Colorado on Nov. 5, Jones came off the bench and scored 20 points.

“It was a great feeling just to get back out there officially, back with my teammates,” Jones said afterward. “All the work we’ve been putting in this summer, I was glad to be able to just step out on that court with no restrictions.”

Jones averaged 11.5 points per game this season. That ranked second among the Longhorns. The 6-4 guard from Irving also led UT in 3-pointers (62) and 3-point percentage (.383).

During Texas’ season-salvaging five-game winning streak at the end of the regular season, Jones scored 21 points against TCU and had 22-point efforts against West Virginia and Texas Tech. For his efforts, he earned an honorable mention on the Big 12’s all-conference team.

According to Texas, Jones has used his platform to connect with cancer patients and their families. He has ambitions of creating a foundation in the battle against pediatric leukemia. Jones was a featured speaker at the MD Anderson Cancer Center last year.

“Truly blessed to be apart of something special,” Jones tweeted. “All glory to god.”