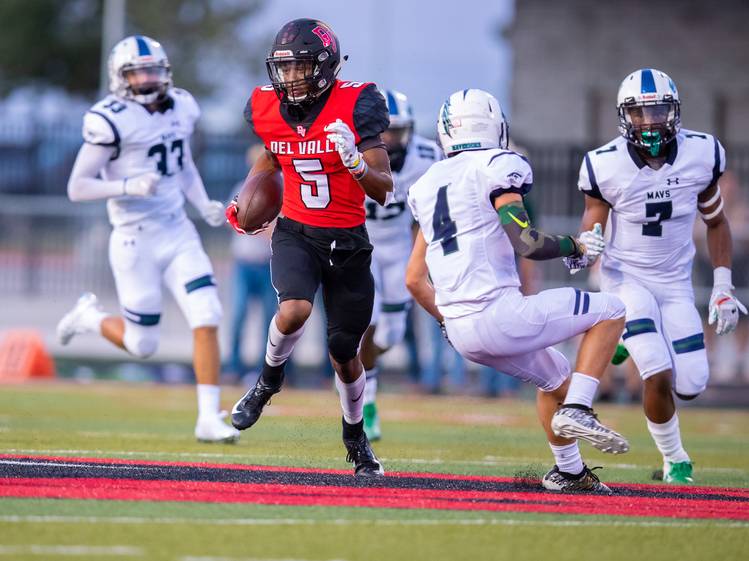 The Next 25 consisted of eight defensive backs, more than any other position. We continue to break down the entire list of prospects with Nos. 10-6.

After a Great conversation with Coach @JayValai , I'm extremely Grateful and Blessed to have been Re Offered by the new Coaching Staff from The University of Texas! Thanks to my parents, family, coaches & teammates. #HookEm🤘 pic.twitter.com/Ii4Xd0yaa9

Anderson is among the best safety prospects to come out of Texas since the 2018 class with Caden Sterns and BJ Foster. Anderson is a coverage safety with range like Andruw Jones playing centerfield for the Atlanta Braves. His athleticism is off the charts with impressive times in the 100- and 200-meter dashes, including a 10.79 this spring before the coronavirus pandemic halted the spring athletic season. Anderson is a productive player on a winning team, earning District 21-6A sophomore of the year honors in 2019. He holds 27 offers from the top programs in the country, including Texas. He’s one of three commitments on the Next 25, having pledged to LSU back in September.

An argument can be made between Allen and Anderson for who’s the top safety in the country. The reality is that both players are of similar builds, play a similar style of safety and ranking one ahead of the other is splitting hairs. Both are committed to LSU. Allen starts for a championship squad at the Class 5A Division II level, earning defensive newcomer of the year honors as a freshman at Fort Worth Southwest and then again as a starter at Aledo as a sophomore. Allen is fantastic in run support, recording 112 tackles last season.

McKinzie is the best linebacker prospect in Texas, and it might not be close. The Oklahoma commit was named District 3-5A Division II’s defensive newcomer of the year as a freshman and a first-team all-district selection as a sophomore. He’s a large-framed linebacker who could grow into a defensive end or a stand-up edge rusher depending on the scheme. He’s a monster against the run because of his ability to physically handle the rigors of blocks while possessing the requisite speed to chase down ball carriers. McKinzie could become a dangerous pass rusher in college with the proper grooming and an improvement in technique. He’s the top-rated committed player on the Next 25.

In a cycle stacked with elite-level defensive backs, Guilbeau is among the first names brought up in the discussion for who’s the state’s best cornerback; 247Sports considers him a high four-star talent and a top-10 corner for the entire class. He possesses the height and leaping ability needed to play outside, as well as the quickness and physicality to play nickel early in his career. He was a first-team all-district selection as a sophomore. He also runs the 400- and 800-meters for Port Arthur Memorial. His offer list includes some of the best programs in the country.

The state’s best wide receiver prospect again resides in the Austin area, just like Lake Travis’ Garrett Wilson in 2019. Burton is a lean, athletic playmaker with the ability to play multiple receiver positions. He holds an offer from each of the four teams that competed in the 2020 College Football Playoff and is a high-priority target for Clemson. He was a second-team all-district selection as a freshman and first-team as a sophomore. His father, Charles, is the head coach at Del Valle, so Burton’s attitude, work ethic and football IQ are above reproach.