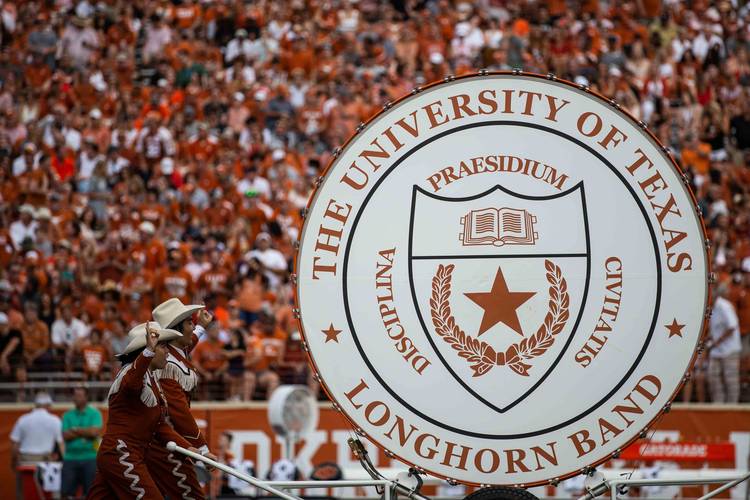 With protests unfolding blocks from campus, Texas athletes and coaches expressed their feelings on social media about race relations, last week’s death of George Floyd and even digitally pushed back against those wanting them to stick to sports.

“It’s an unpleasant time right now but not unfamiliar one,” Texas baseball pitcher Kamron Fields tweeted Monday. “We need everyone in this fight for a Change!”

Striking the right tone hasn’t been easy, either. On Friday, UT posted an initial tweet that said, “It’s not the color of your skin or which color of the rainbow you identify as. … It’s Burnt Orange that unites us. Let’s all be a part of the change.”

Various followers and even some UT athletes blasted that message as tone-deaf. It was later deleted.

“So it’s not about color?” sprint standout Jonathan Jones tweeted. “Last time I checked burnt orange ain’t get murdered and oppressed…this opening sentence is disgusting. If you ain’t willing to fully commit just say that. I’ll wait for the email to ask me to remove this tweet. Just know y’all dead wrong. Cool hookem.”

Fellow track athlete Micaiah Harris tweeted, “My people are in the streets literally fighting to LIVE solely due to the fact that our skin color is different!! So this is about the color of OUR skin. Therefore i will not let anyone swipe away apart of my identity for the colors of this University.”

“We must always take sides. Neutrality helps the oppressor, never the victim. Silence encourages the tormentor, never the tormented. The opposite of love is not hate, it’s indifference.” — Elie Wiesel #Floknows pic.twitter.com/EHfcL2x1tK

Men’s basketball player Andrew Jones, recently named the Big 12 sportsperson of the year, posted various messages. “What’s done In the dark will always come into the light,” he tweeted. And also: “Y’all not tired yet? I can’t seem to understand how being BLACK is such a threat to American society?”

In response to someone who tweeted Jones should “Stick to baskeball bud,” Jones didn’t hold back. “I’m a Free Black Man before I’m anyone’s puppet or source of entertainment,” he responded.

His coach, Shaka Smart, posted heartfelt, thought-provoking comments and said of Floyd’s death, “This was a human being. This was preventable.” Video captured a white Minneapolis police officer putting his knee on Floyd’s neck for almost eight minutes. The officer was fired and has been charged with third-degree murder.

“George Floyd’s death was not an isolated incident,” Smart continued. “It was not an accident. It was another tragedy in a long line of terrible violence perpetuated against black people in this country. This violence is part of the systemic racism that has plagued America since its inception and continues to devastate our communities.”

On Monday, Herman said the UT football team had a three-hour virtual team meeting. Asked on Fox Sports to describe the emotions, Herman said it was “heavy on my heart.”

Herman told the players he not only has their back, but “I’ve got your front.”

“Now more than ever our society needs a systemic overhaul, and it starts with the way  that minorities are treated — implicitly and explicitly,” Herman said.

Quarterback Sam Ehlinger, arguably the most high-profile athlete at Texas currently, posted a 57-second video quoting Scripture and his relationship with black athletes.

“I would just like to say that I’m extremely sorry for the way the black community has been treated,” Ehlinger said in the video. “It’s not what God has called us to do. I hope that we could move forward soon and treat everyone equally and understand that there shouldn’t be any difference of how someone is treated because of their skin color or race. God bless.”

I Stand With You🤞🏾🤞🏻 #BlackLivesMatter pic.twitter.com/LgnIirU0Y7

After the blowback from the initial tweet, Texas athletics posted another message on Sunday that was signed by athletic director Chris Del Conte.

“Throughout the department and programs, we are encouraging our student-athletes, coaches and staff to speak up and become part of the direct and difficult conversations that must take place in the days and weeks ahead,” the Sunday tweet said. “Their voices need to be heard and they are leaders who can help us move forward. We must do our part in uniting our nation alongside them.”

The statement continued that UT athletics must “do more to support our friends, families and communities who are angry, frustrated and hurting right now. It is our duty to stand up against racism.”