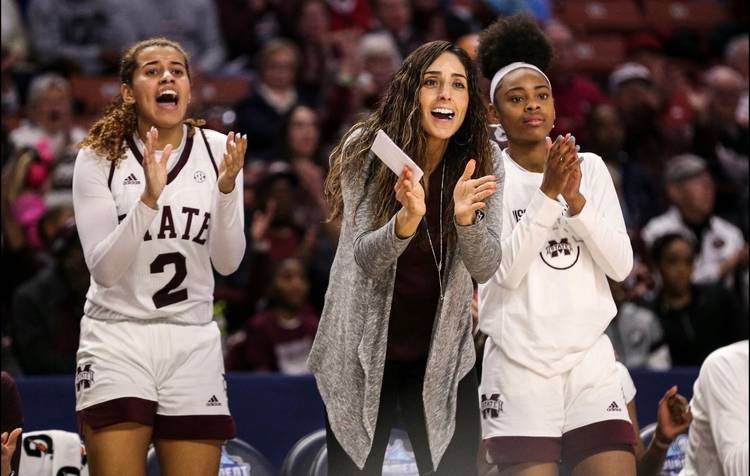 Back in early April, Elena Lovato found herself in Albuquerque being “the greatest auntie of all time.”

After the coronavirus pandemic had prematurely ended the season, the Mississippi State women’s basketball assistant coach went back to her hometown. But while enjoying time with her nieces, Lovato received a call from her boss. Vic Schaefer had been approached by Texas about its coaching vacancy. He wanted to know if Lovato was interested in joining him.

Since Lovato considered herself and Schaefer to be a “package deal,” the answer was yes. So she accepted UT’s job offer that will pay her $170,000 annually. She worked on a move to Austin that was completed on Friday. With no games or practices on the schedule, she fielded several media requests.

“Obviously, women’s basketball at the University of Texas is important,” Lovato said. “We’ve learned that really quickly since being part of the team for the last month.”

Schaefer and the three Mississippi State assistants who followed him quickly got to work. Within three weeks of Schaefer’s hire on April 5, Texas landed five recruits. It welcomed Duke graduate transfer Kyra Lambert and Penn State’s Lauren Ebo. Pearland forward DeYona Gaston was a late addition to the 2020 recruiting class. The Longhorns additionally secured commitments from Aaliyah Moore and Rori Harmon, both of whom are rated as top-20 talents in the 2021 recruiting cycle.

Schaefer’s staff had eyed Lambert, a point guard, and Ebo, a 6-4 center, at Mississippi State. Since Texas had similar holes on its roster, that was a seamless recruitment. The coaches had a longstanding relationship with Gaston, who originally signed with Mississippi State but was released from her letter of intent after Schaefer’s departure.

The pledges from Moore and Harmon may give UT fans a better idea of how Schaefer and his staff will recruit with the Longhorns. Lovato is also the program’s recruiting coordinator. “Coach Schaefer likes to recruit to a fit, not only a basketball fit but also a culture fit,” she said in a recent Zoom call. Mental toughness and a willingness to be pushed are must-have qualities in a Schaefer recruit.

“We are very particular with who we recruit,” Lovato said. “We don’t necessarily cast our net out wide.”

Lovato, 41, has already been a head coach three times. During her only year at Grayson College, she turned a 4-26 team into a 32-game winner. She went 72-2 with two NJCAA championships while coaching at Trinity Valley Community College from 2012-14. And after working with Schaefer for two years at Mississippi State, she took over at Arkansas-Fort Smith in 2016.

The move to Fort Smith allowed her to be closer to her parents, who were dealing with health problems. (Lovato also made an unsuccessful bid for the New Mexico job that offseason). She won 37 of her 61 games with the Division II Lady Lions. She opted to return to Starkville after two seasons.

Now, Austin is home. Texas is the 10th line on a coaching résumé that began at Pittsburg State in 2008. In her Zoom availability, Lovato expressed a belief that Texas can create a championship-winning culture.

Why so confident? “I think the fact that we’re confident in ourselves as a staff and we’re hearing that these girls are ready to buy in and they’re ready to go to work,” she said. “For coach Schaefer, that’s more than half the battle.”

As the recruiting coordinator, Lovato’s duties include organizing the list of Texas targets and keeping track of who the coaches are talking to and traveling to see. She is also the self-described calm to Schaefer and associate head coach Dionnah Jackson-Durrett’s storm. On the court, she’ll tutor a group of guards that includes rising sophomore Celeste Taylor.

When asked about Taylor, Lovato noted that “her résumé speaks for itself.” This past season, the Taylor started 26 times and averaged 9.3 points and 1.4 steals per game. She was a unanimous pick on the Big 12 all-freshmen team.

“I’m really excited just to get out there on the court with her and learn from her and grow as a player and a person,” Taylor told the Longhorn Network.