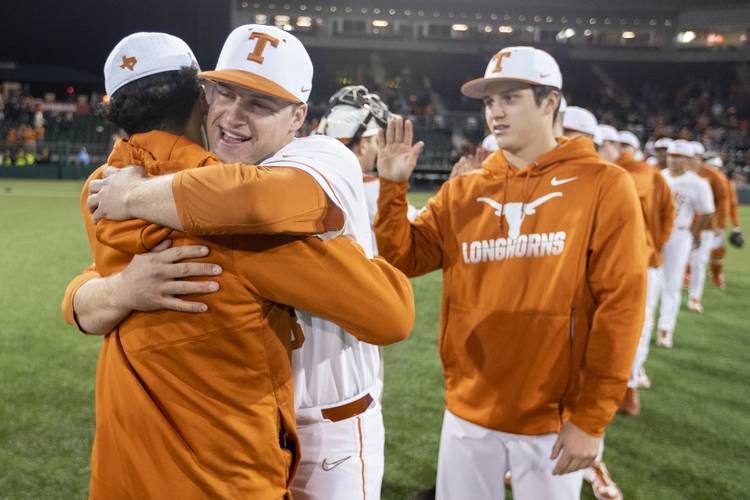 What does one do in the days leading up to the MLB draft?

If you’re Texas pitcher Bryce Elder, you golf. You prepare for a watch party with your family. And you head over to your grandmother’s home to mow the lawn because even a potential draft pick has chores to handle.

For the past three years, Elder has mowed down batters as a member of UT’s pitching staff. On either Wednesday or Thursday, he could hear his name called in the MLB’s abbreviated five-round draft.

“The way that the coronavirus ended the season, it made for a long time before the draft where you really can’t control anything,” Elder said this week. “I’m just trying to find ways to get better even though we can’t play. Wherever the chips fall, they do. I trust that’s what’s supposed to happen and we’ll move forward from there and see where it goes.”

Will Elder be one of the 160 players selected this week? He believes so. MLB.com lists the 6-2, 200-pound right-hander as the draft’s 109th-best prospect.

A longtime fan of the Texas Rangers, Elder did not grow up with big-league ambitions. He was not drafted out of Decatur High in 2018. His first year at Texas featured a 5.55 ERA, 21 relief appearances and a five-inning start at Oklahoma.

A switch flipped for him during the fall of his sophomore year, however. Elder eventually won the job as UT’s Friday starter and became an all-conference pitcher. Before the season was cut short, he boasted a 2.08 ERA and 32 strikeouts over 26 innings.

Last season, Elder allowed a total of three runs over 15.2 innings against TCU and West Virginia teams that countered with pitchers who were eventually taken with the seventh and 11th overall picks of the 2019 draft. This February at Minute Maid Park, Elder held his own against LSU’s Cole Henry, who is rated as the draft’s No. 45 prospect.

Texas freshman Pete Hansen called Elder the “greatest leader I’ve ever played with.” UT coach David Pierce listed him  as “one of the best pitchers that’s ever pitched for me.”

“He’s very cerebral, he knows what he’s doing. He handles the game very well,” Pierce said. “I’d love to have him back, but at the same time, we’ll see what opportunities are presented to him. I think he’s going to pitch in the big leagues.”

According to Elder, the strides he’s taken over the past few years can partially be credited to working with Santa Barbara Foresters manager Bill Pintard in summer ball. He has attempted to emulate the on-mound demeanor of Parker Joe Robinson, who was a reliever and redshirt junior at Texas when Elder was a self-described high-strung freshman.

“The way he went about things was way more relaxed than I’d ever seen it,” Elder said. “He didn’t care what happened when he was out there. He didn’t care if he gave up a ton of runs. All he did was go out there and throw his stuff.”

The Class 4A town of Decatur has recently celebrated the MLB selections of Joe Staley (eighth round, 2010) and Bodi Rascon (14th round, 2019). If chosen this week, Elder will join that grouping as well as the 11 pitchers who have been drafted out of UT since Pierce’s first season in 2017.

Elder is also not the only name that UT fans will be tracking. Pierce has estimated that the draft could claim a half-dozen of the signees from a 2020 recruiting class that Baseball America rated as the nation’s best.

Getting drafted is not a guarantee that these prospects won’t end up at Texas. The minor leagues are currently in disarray. The NCAA’s restoration of a year of eligibility for its spring athletes has given Elder, who’s a junior, some additional leverage in his salary negotiations.

Elder insists he hasn’t spent much time tracking the state of the minor leagues. He added that his negotiating demands haven’t changed much this spring.

“Just because the year is different, I don’t know if I would do anything different,” he said.

Despite getting only four starts this season, Elder believes he “showed who I am, kind of showed what I’m about.” Over the past few months, he has worked out on a mound that he borrowed from his high school and placed in a friend’s shop. He met with prospective teams over Zoom. Now, he is simply waiting for a phone call.

“If we find the right fit, then I might go play pro ball. If we don’t, I’ll probably go back to Texas,” Elder said. “I think that’s what it comes down to, whatever the best decision at the time is going to be.”

The Dotted Line: Predicting the destination of the top-rated uncommitted Fab 55 members