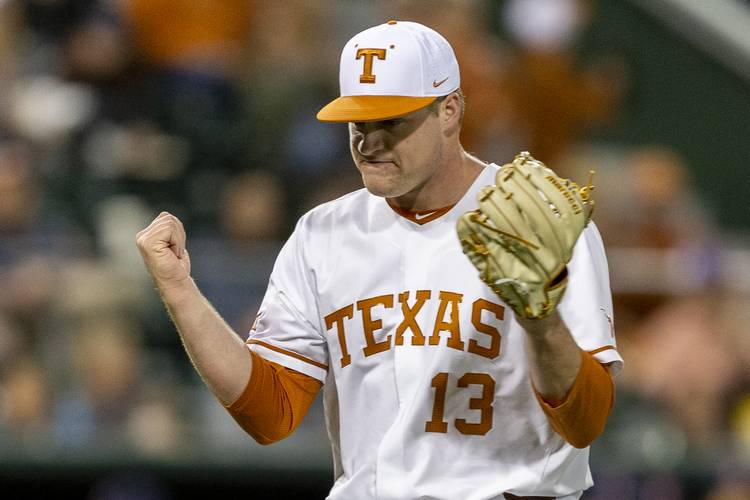 If Bryce Elder isn’t pitching in Austin next spring, he will instead be throwing in Atlanta’s farm system.

A right-handed pitcher, Elder was chosen by Atlanta in the fifth round of the MLB draft on Thursday. The Braves selected Elder with the 156th overall pick.

Elder becomes the 12th pitcher from UT to be drafted since David Pierce took over the program ahead of the 2017 season. Of those arms, only Morgan Cooper (62nd pick, 2017) and Nick Kennedy (146th pick, 2017) were drafted higher. Two years ago, Atlanta took UT right-hander Nolan Kingham in the 12th round.

Undrafted out of Decatur High in 2017, Elder made 21 relief appearances during his freshman year at Texas. Elder won the job as UT’s Friday starter the following spring and spent two seasons as an ace in Austin.

In 2018, Elder went 2-4 with a 2.93 ERA and earned an all-conference nod. Elder made only four starts during a 2020 season that was shortened by the coronavirus pandemic, but his 2.08 ERA ranked ninth in the Big 12. In his 17 starts these past two seasons, Elder allowed more than three earned runs on only two occasions.

On its broadcast of the draft, MLB Network analyst Jim Callis said that Elder’s selection was a “tremendous value in the fifth round. … If I’m the Braves, I can’t believe my luck here.” The 6-2, 220-pound Elder has four pitches — sinker, slider, curveball and change-up — that he can throw. Over the 109 innings he logged in 2019 and 2020, Elder struck out 118 batters while issuing 40 walks.

“I’d love to have him back, but at the same time, we’ll see what opportunities are presented to him,” Pierce said. “I think he’s going to pitch in the big leagues.”

Elder will have until Aug. 1 to decide whether he’ll sign with the Braves or return to Texas. (Elder would still be classified as a junior in 2021 since the NCAA restored a year of eligibility for all of its spring athletes). According to MLB.com, the assigned value for the 156th pick’s signing bonus is $336,600. Florida International infielder Austin Shenton, the 156th pick in last year’s draft, signed for that amount.

“If we find the right fit, then I might go play pro ball. If we don’t, I’ll probably go back to Texas,” Elder told the American-Statesman this week.

Over the course of the two-day draft, MLB teams selected four high school seniors who had signed with Texas this past November. UT’s 2020 recruiting class had been labeled by Baseball America as the nation’s best.

Schools that have had the most recruits drafted through the first three rounds:

Due to the coronavirus pandemic, this year’s draft was limited to five rounds and 160 picks. Last year, 1,217 players were chosen over the course of a 40-round draft.

Pitchers drafted out of Texas since 2017

Texas will start voluntary workouts next week, but first, how are those COVID tests looking?

In show of unity and force, Texas athletes call for changes to address UT’s racial past, future