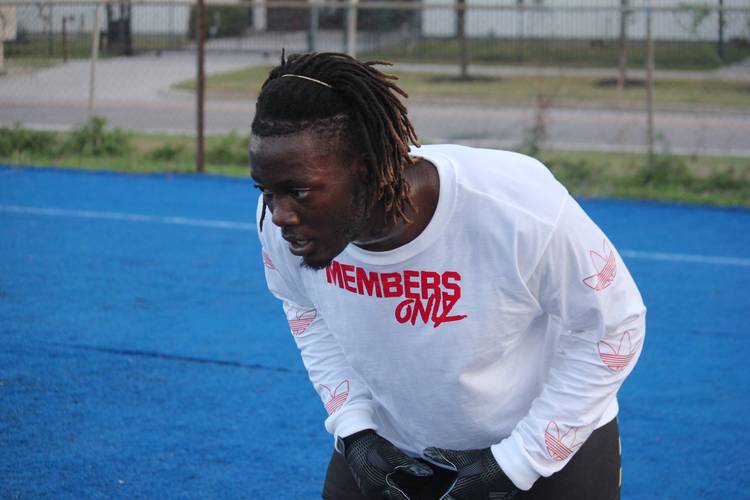 Texas’ 2021 recruiting class remains at 11 members entering next week, which will begin with the expected announcements Monday of four-star defensive backs Ishmael Ibraheem and JD Coffey. Texas’ class ranks 17th in the country but first in the Big 12, and another top-10 class is likely in the cards as the class fills up over the summer and into the fall.

High school practices were allowed to resume across the state on Monday. Eight of the Longhorns’ 11 commitments play in Texas. One of those is Hayden Conner, currently Texas’ only offensive line pledge.

The four-star from Katy Taylor is working his hardest to change that.

“We need more offensive linemen in the class and I’m trying my best to work on the guys we want, including the Brockermeyers and Bryce Foster,” Conner said. “I’ve even had some meetings with Savion (Byrd) and coach (Herb) Hand.”

The challenges placed in front of current athletes is unquestionably unique. On-campus schooling was canceled early in the spring. No visits can occur until at least August with the NCAA extending the dead period. Gyms are closed. Weight rooms are closed. It wasn’t an easy three months for prep athletes to stay in shape.

“I was fortunate to have a bench and squat rack in my garage,” Conner said. “Some guys have come over and gotten in some workouts, so I feel like I’m even stronger than I was before quarantine.”

Conner plans to enroll early at Texas, meaning he only has one semester left of high school. He says he plans to enjoy that time and soak in the memories before moving on to Austin. Katy Taylor reached the Class 6A Division II state semifinals in 2019.

“I’m ready to get back to work with my team. I’m excited about the guys returning,” Conner said. “I think we’re going to have a good run this year.”

Jordan Thomas is another in-state commitment represented on the Fabulous 55. The 6-3, 240-pound four-star from Port Arthur Memorial enters his senior season with a point to prove despite his high ranking and dozens of college offers after missing 2019 with a leg injury.

“I’m playing with a chip on my shoulder and I’m bringing ruthless aggression to the field,” Thomas said.

“Jordon’s motor is through the roof. He loves physical football,” Morgan said. “He is a great vocal leader and a guy who is thirsty to learn how to become a better football player. When the pads come on, his presence is undeniable.”

Thomas committed on May 2. The 2021 class is likely to be overrun by de-commitments if official visits are allowed to take place before the early signing period. Thomas says that he isn’t worried about his commitment status and plans to sign with the Longhorns.

“I’m a man of my word, so when I made that commitment, I knew it was something I’d stick with even if we’re allowed to take visits in the fall,” he said. “I’m blessed for the opportunity at Texas and I’m Hook’em for life. Coach (Oscar) Giles was excited when I committed.”

Texas will start voluntary workouts next week, but first, how are those COVID tests looking?