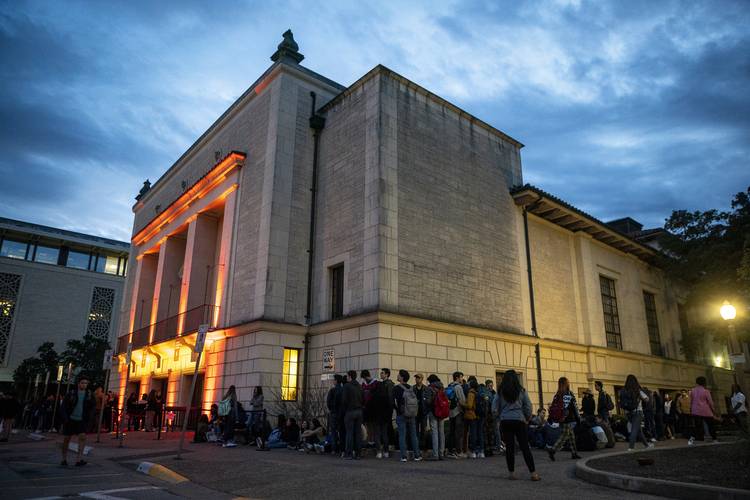 The Hogg Memorial Auditorium on the University of Texas campus, seen here in a photo taken on Tuesday, Jan., 21, 2020. [Stephen Spillman for Statesman]

The University of Texas has a long tradition of naming campus buildings after school presidents, influential donors and members of the UT System Board of Regents.

On Friday, dozens of Texas athletes requested that four specific building names be changed due to the individual’s personal history. All four have been targeted previously by critics about UT’s racial past:

Robert Lee Moore Hall: Built in 1972, the “RLM” building is the tallest on campus and home to the Department of Mathematics, Physics and Astronomy. Moore was nationally recognized as a math scholar and taught at UT well into his 80s. He died in 1974 at the age of 91.

However, Moore also was well known for being racist and was in favor of segregation. He generally refused to teach black students, and famously once told a student, “You are welcome to take my course but you start with a C and can only go down from there.”

Painter Hall: First constructed in 1933, the UT physics building has gone through several reconstruction projects. It’s named after Theophilus Painter, or T.S. Painter, as he was known — a zoologist who also studied human chromosomes. He later served as UT’s president from 1946-52.

In 1946, Heman Sweatt was denied admission to the UT law school. At the time, Painter said that Sweatt was “duly qualified for admission into the Law School at the University of Texas, save and except for the fact that he is a Negro.”

With the help from the NAACP, the legal case reached the Supreme Court, which decided unanimously in Sweatt’s favor. UT was forced to allow black students into graduate school, though undergraduate students could still be segregated.

Littlefield Hall: George Littlefield’s legacy is all over campus. A major in the Confederate army, Littlefield had business success and was appointed a UT regent in 1911. He became an influential donor and still has several things on campus named in his honor — like the LIttlefield House, Littlefield Fountain and a dorm and cafe.

UT athletes specifically referred to changing the Littlefield Hall dormitory and added a bulletpoint “to include the patio cafe and fountain.” It was built in 1927 is the oldest resident hall on campus.

Hogg Memorial Auditorium: As the governor of Texas from 1891-95, James Hogg championed higher education and proposed some of the nation’s first laws against lynching. However, he allowed railroad cars to remain segregated, setting the stage for the Jim Crow era in Texas.

Hogg Auditorium, which opened in 1933, has long been a facility for performing arts. Outgoing UT President Gregory L. Fenves announced in December 2018 that Hogg’s statue would be removed from the South Mall along with three others.

Hogg’s statue was moved near the Hogg Building, east of the UT Tower. The Will C. Hogg Building is named for the governor’s son. Fenves has called Will Hogg a supporter and advocate for UT.