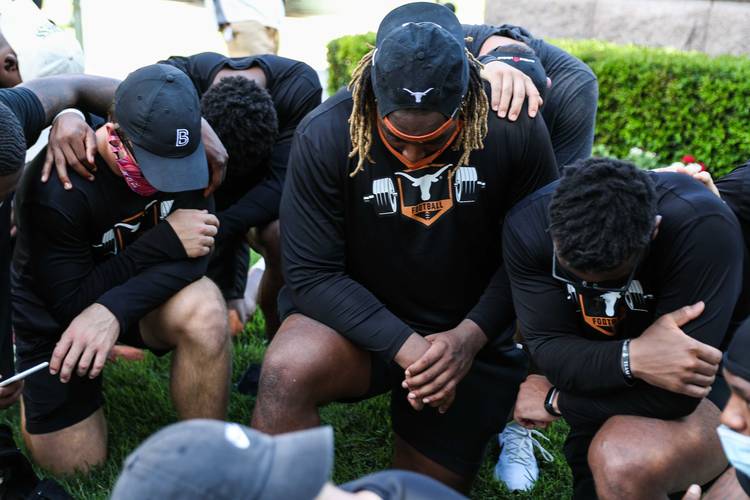 UT football team at the North entrance of the Texas State Capitol kneel for 9 minutes in a demonstration against racism in Austin on Thursday, June 4, 2020. [LOLA GOMEZ / AMERICAN-STATESMAN]

A herd of Longhorns athletes called for changes to address the University of Texas’ past racial transgressions, specifically the renaming of buildings on campus and replacing “The Eyes of Texas” as the school song. Players of different colors, ethnicities and genders came together in a show of solidarity with a Twitter post circulated among athletes from different sports across campus.

The tweet and its ramifications wasn’t met with positivity from every group, but it was by current high school athletes, including high-profile commitments and recruits.

“Change has to start somewhere,” said Derrick Harris, a soon-to-be senior linebacker from New Caney who is pledged to the Longhorns in the 2021 class. “It’s not a race war. We just want equality. This is a great first step and I believe in what the players are doing.”

For Harris, the actions taken by Texas athletes enhance his view of the university in which he plans to enroll next year.

“I’m glad that I can go to a school where I know I have a voice and am able to voice my opinions,” he said. “You have to stand up for something when it is wrong.”

Those sentiments were echoed by Hayden Conner. The four-star from Katy Taylor is the only offensive lineman currently pledged to Texas. He also happens to be white, suggesting that this isn’t a divide between race in the young community as much as it is an advance against racism, systemic or otherwise.

“I’m glad I chose a university and program that supports the players and their ability to work toward change,” Conner said. “Police brutality and racial injustice is wrong. My challenge is that I grew up in a bubble where my friends and teammates were diverse. I grew up seeing black and white families loving each other.”

Hayden hopes sports can bring people together. A shared love for Texas football can be the bridge between the athletes wanting change and the old-guard resistant of changes to traditions.

“We were one big family in sports, but it became more than about sports. My AAU basketball team and 7v7 football team had as many players with mixed families as any other race or background,” he explained. “I hope that change can come and that everyone can feel the way I did growing up.”

Change is never easy and it is usually met with resistance. The current Texas players made their stance clear in the letter released to the public through Twitter.

“The recent events across the country regarding racial injustice have brought to light the systemic racism that has always been prevalent in our country as well as the racism that has historically plagued our campus,” the letter states. “We, as student athletes, and collectively as the University of Texas Longhorn football team, are aware that we are an athletic department made up of many black athletes, and believe that it is time we become active on our campus.”

The news became national and it even caught the attention of recruits headed to other colleges. Tunmise Adeleye grew up with Conner and Texas commit Jalen Milroe. Adeleye played at Katy Tompkins with Milroe until this spring when he announced a move to IMG Academy in Florida. The four-star defensive end is an Ohio State pledge.

“I’m extremely happy that the players are using their platform to force change at the university,” he said. “Sports bring in the biggest revenues to schools. If the athletes bind together, they can really force the hand of all universities across the nation.”

And that’s the reality. This isn’t a University of Texas problem. The players at Texas took a heartfelt and brave stand against traditions dampened by racial overtones or downright racism. And like the protests we’ve seen recently across the nation and the world, athletes across the nation are likely to follow suit, specifically in the south where we’ve yet to truly separate our culture from the demons of the Confederacy.

“It’s time to stop holding on to the past just to hold on to the past,” said one current Texas player who preferred to remain anonymous. “This isn’t about black or white. It’s about right and wrong.”

What’s in a name?: A look at the names on buildings that Texas athletes want changed