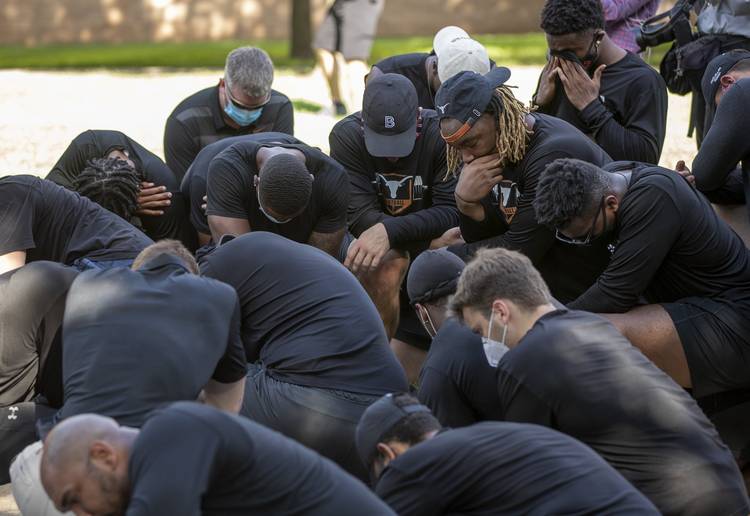 University of Texas football players kneel in silence for nine minutes at the end of a team march to the Capitol on Thursday June 4, 2020, to protest the killing of George Floyd. [JAY JANNER/AMERICAN-STATESMAN]

The activism that starts at Texas may indeed change the world.

While those in the Tower were getting their arms around a list of requests from athletes, others around the region were raising issues tied to racial equality.

Interim Texas president Jay Hartzell posted a statement Monday that he would listen closely and then “work with the entire community to develop a plan to move the university forward.”

Hartzell did not address the specific requests outlined in a two-page letter posted by Longhorns athletes last Friday, including renaming buildings and changing “The Eyes of Texas” school song. However, Hartzell signaled he’s open to a full-throated conversation just as his name is being stenciled on the door.

“I have begun scheduling conversations with students, including leaders of Black student organizations and student athletes, as well as other community members to hear their concerns and ideas directly,” Hartzell said in his statement.

Together, we will create a plan to ensure black students are fully supported and to make meaningful changes to promote diversity and equity: https://t.co/pPdfyubcV6

The former dean of the McCombs School of Business has a delicate tightrope walk ahead. On campus, Hartzell oversees a community of 18- to 22-year-olds teeming with liberal idealism. Beyond the perimeter are thousands of older graduates, some of whom gives large sums of money and make no bones about their conservative viewpoint.

Welcome to the Tower, Jay.

“I thank you for your ideas and ongoing guidance and welcome your emails and suggestions,” Hartzell wrote. “I pledge that we will come together as a community to make The University of Texas an even greater place.”

The philosophical dichotomy was unmistakable at Oklahoma State.

A photograph of OSU coach Mike Gundy surfaced Monday with him wearing a One America News Network shirt. OAN is considered a far right-leaning news organization that is gaining favor with President Trump.

“I will not stand for this,” Oklahoma State running back Chuba Hubbard tweeted. “This is completely insensitive to everything going on in society, and it’s unacceptable. I will not be doing anything with Oklahoma State until things CHANGE.”

I will not stand for this.. This is completely insensitive to everything going on in society, and it’s unacceptable. I will not be doing anything with Oklahoma State until things CHANGE. https://t.co/psxPn4Khoq

Hubbard was the nation’s leading rusher last season with 2,094 yards and 21 touchdowns.

“This afternoon has been very disturbing,” Holder said. “The tweets from the current and former players are of grave concern.”

Then the story practically turned on a dime. OSU posted a video with Gundy and Hubbard together, and Hubbard was the one apologizing.

The Cowboys were scheduled to start voluntary workouts on Monday. But Hubbard appears to now be sitting out, and OSU’s top linebacker Amen Ogbongbemiga retweeted the message, appearing to stand in solidarity with his teammate.

Gundy made national headlines in April for his comments about COVID-19 and how football was key to restarting the state’s economy.

This comes after a weird scene unfolded in College Station over the weekend. There were dueling protests Saturday about a statue of Lawrence “Sul” Ross, a Confederate general who later became president at Texas A&M. The statue was vandalized as someone spray-painted “BLM” in support of the Black Lives Matter movement.

An A&M professor was arrested during the protests on Saturday, prompting A&M starting quarterback Kellen Mond to speak out.

“Michael Alvard was arrested at the Sully Statue protest for trying to speak to both sides of the protest. Yes, one side is counter protesting racism,” Mond tweeted.

When someone challenged Mond on Twitter, the athlete responded by tweeting, “If one side is protesting racism, the other side is counter protesting racism. Prairie View A&M was created to obtain federal funds from the second Morrill Act (1890). Instead of integrating the TAMU campus, PVAMU was created.”

As for Ross, Mond tweeted, “He killed and disenfranchised blacks.”

Iowa also parted ways with strength coach Chris Doyle on Monday. He had been put on administrative leave since a large group of former players, many who were Black, made claims about being mistreated.

Doyle, the nation’s highest-paid strength coach at $800,000 per year, had led Iowa strength program since 1999. Other allegations were also made toward longtime Iowa coach Kirk Ferentz and some assistants. The athletic director has launched an internal review.