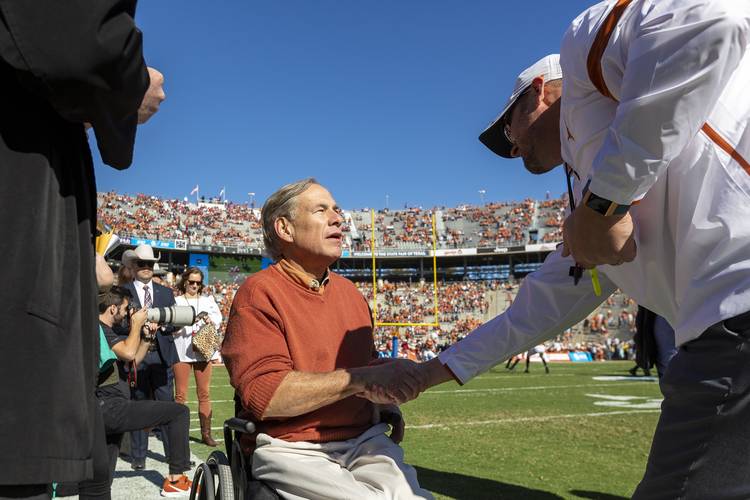 Gov. Greg Abbott confirmed Tuesday that he met with college athletic directors around the state of Texas last week to discuss limiting stadium capacity to 50% this fall due to COVID-19.

While Abbott did not get into specifics about the call itself, he said basketball and volleyball venues were addressed. Athletic administrators must focus on more than just spacing out fans through social distancing, the governor said.

“It includes more than just the seating strategy,” Abbott said. “It includes the way people will go about the process of entering stadiums. They’ll include things such as avoiding large gathering areas within stadiums and certain other strategies.”

Texas athletic officials have already begun modeling out how all of UT’s football season ticket holders can get into the 100,000-seat Royal-Memorial Stadium this fall. UT sold more than 62,000 season tickets for the 2019 season.

“Our social modeling if we were to stay with a true 6-foot radius… we’re only somewhere between 30 and 35% (capacity) in that case,” UT external operations director Drew Martin told his colleagues across the country last week.

Texas athletic director Chris Del Conte has remained steadfast in his belief the stadium will be full for the season opener against South Florida on Sept. 5. However, UT will follow all state guidelines, Del Conte has said.

Martin said the Longhorns are already looking at one-way aisles, line queues outside the restrooms and other acceptable safety standards.

“All of these athletic directors, they are charged with the duty of coming up with the best strategy for their particular stadium and presenting it to the doctors to serve on my team to make sure that the game plan, if you would, will satisfy the standards that the doctors believe is a safe way to approach these gatherings,” Abbott said.