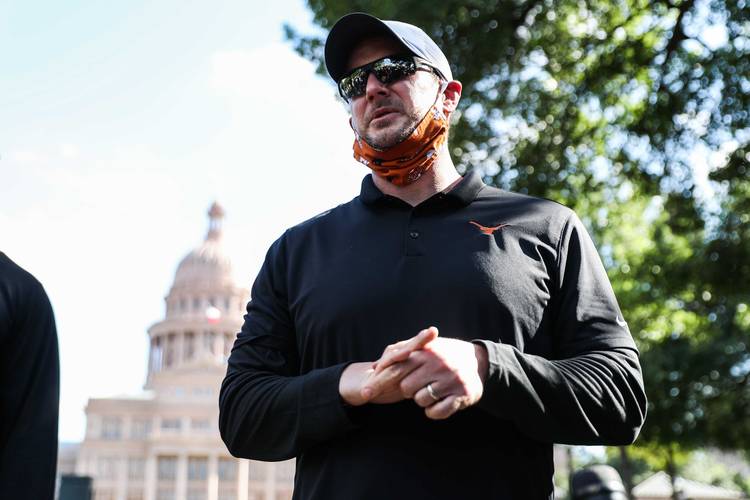 UT football team Tom Herman, who has been socially active and supportive of his players, speaks at the North entrance of the Texas State Capitol in a demonstration against racism in Austin on Thursday, June 4, 2020. [LOLA GOMEZ / AMERICAN-STATESMAN]

Texas’ 2021 recruiting class moved into the ninth spot in the nation and extended its recruiting lead over Baylor and Oklahoma by adding four-star defensive backs JD Coffey and Ishmael Ibraheem on Monday. The Longhorns hold 13 commitments with July approaching despite ongoing travel restrictions due to COVID-19. No visits are allowed by players or coaches until at least August.

The short answer is yes. Texas’ recruiting class currently ranks inside the top-10 currently and the Longhorns are still searching for offensive linemen, a running back and more defenders. The Longhorns will need to fend off recruiting giants like LSU, Georgia and Alabama. Texas ranks above each of those schools now, but that’s likely to change. The Longhorns do hold the lowest amount of commitments of any team ranked in the top-10, implying that the Longhorns are out-recruiting most of the schools currently ranked above them based on player rating. The addition of a punter also brings the ranking down.

The ability for Texas to ensure its fourth consecutive top-10 recruiting ranking under Tom Herman comes down to Texas’ ability to hold onto its current commitments, add prospects at need positions, specifically along the offensive line, and work on players committed to other schools once the travel restrictions are lifted.

In the end, the ability to recruit reflects a team’s ability to win on the field. A strong 2020 season would enhance Texas’ chances of flipping some players and landing their remaining targets. Another season of struggles makes the road to signing a top-10 class much harder.

What does Texas do at offensive line?

It seemed nearly impossible to imagine Texas struggling to wrangle offensive line commitments entering the 2021 recruiting cycle because of the depth of talent within the state and offensive line coach Herb Hand’s reputation on the recruiting trail. The state of Texas is home to at least a dozen four and five-star talents, including Tommy and James Brockermeyer, the sons of a former Longhorn and the younger brothers of a current Longhorn. Those two seemed like slam dunks for Texas six months ago. Alabama currently leads.

The Longhorns won’t give up on the Brockermeyer twins until they sign with another school, even if they choose Alabama or another school in the meantime. A strong 2020 season would absolutely put Texas back in the mix and the family ties remain. Texas is also trailing for Bryce Foster, the No. 5-ranked player on the 2021 Fabulous 55. He’s a teammate with Hayden Conner, Texas’ only offensive line commit. Texas hoped its offensive line class was the Brockermeyer twins, Conner and Foster. Instead, only Conner is currently in the fold.

Other options include Savion Byrd of Duncanville and a number of out-of-state prospects. And with such a weird cycle, even players pledged to other schools remain in the fold if the Longhorns can get those guys on campus once the football season starts.

Who must Texas keep committed?

There isn’t a player committed that Texas wants to lose, but there are players more valuable than others. The Longhorns must hold onto the Denton Ryan duo of Ja’Tavion Sanders and Billy Bowman Jr., who are the top two ranked players in the class. The pair also represent a huge recruiting win at a pipeline school in Dallas-Fort Worth. Herman has relied heavily on his Houston ties during his first few years on the job, but his 2020 class possessed more commitments from DFW than his previous three classes. Texas must recruit well in Dallas and Fort Worth to eventually compete with Oklahoma for a Big 12 championship.

The other player Texas must keep committed is Jalen Milroe. The four-star quarterback from Katy Tompkins is the vocal leader of the class and one of Texas’ best recruiters. The Longhorns’ ability to sign a top-10 class rests in the hands of Milroe. Losing him would start a domino effect throughout the class. Keeping him committed, coupled with a strong 2020 season, is how Texas makes a late push on the elite prospects in the state.