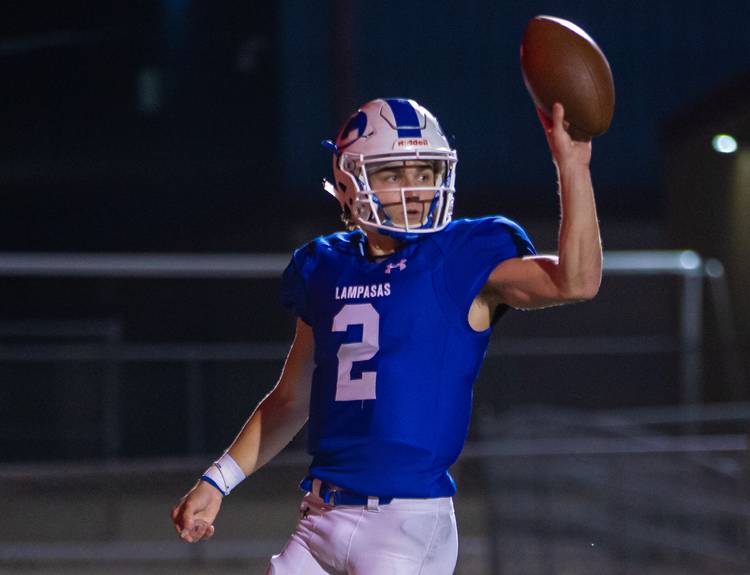 Lampasas Badgers quarterback Ace Whitehead (2) celebrates his touchdown against the Brazosport Exporters during the fourth quarter at the Class 4A bi-district football playoff on Friday, Nov 15, 2019, at Bob Shelton Stadium. [JOHN GUTIERREZ FOR STATESMAN]

Lampasas quarterback Ace Whitehead has already established a legacy of excellence while playing football. His future, though, will be on a much different playing field.

Whitehead has accepted a scholarship offer to play baseball for the University of Texas.

The pitcher-infielder, who will begin his senior year in the fall, made the announcement on his Twitter page Wednesday afternoon.

“I want to thank God, my family, my teammates and my coaches for helping me grow into the athlete and person I am today,” he wrote. “I want to thank you Braden (Summers) for giving me the greatest motivation I could ever have. It was a dream of ours as kids and now it’s a reality. With that being said, I am excited to announce my commitment to THE University of Texas. Hook ’em.”

Whitehead was referring to first cousin Braden Summers, who died five years ago from pneumonia caused by MRSA. Whitehead has often said Summers gave him motivation to excel in athletics.

Most Central Texas fans know Whitehead for his exceptional junior year last fall. After combining for 70 passing and rushing touchdowns, he was named Class 4A offensive player of the year by the Associated Press. He was also named first-team quarterback for Central Texas by the American-Statesman.

Whitehead, though, has been largely overlooked by college football teams. At 5-foot-10 and 180 pounds, he has been told he is too small to play football at the next level. It has gone largely unnoticed that he is a dynamic baseball player as well.

Before the season abruptly ended because of the COVID-19 pandemic, he was hitting .527 for the Badgers, leading the team in runs, hits and stolen bases. On the mound he compiled a 3-1 record and a 0.92 ERA to help Lampasas compile an 11-4-1 record.

Whitehead currently is preparing for his final high school football season. He would be eligible to play at Texas in 2022.