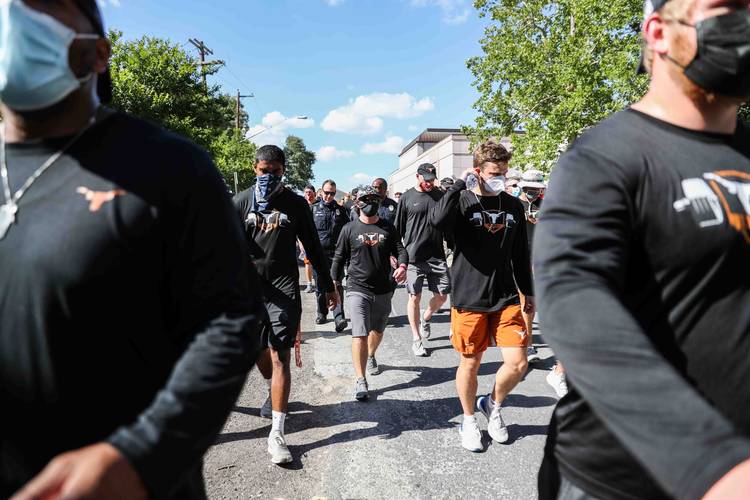 Neither Hartzell nor Del Conte were expected to make any promises about changing building names or “The Eyes of Texas” school song — two major issues brought up by the players last week.

However, Hartzell issued a statement Monday saying that he wanted to listen to everyone on campus about their feelings on race and racial equality at UT. Hartzell took the first step by going straight to Frank Denius Fields and listening to the UT football team inside the practice bubble.

“I thought President Hartzell’s and my meeting with the football team last night went really well,” Del Conte said Thursday in a statement. “I was extremely proud of our team and the dialogue was tremendous. They are passionate, want change and voiced their concerns.

“We talked, but most importantly, we listened and began the conversations that are going to be so critical as we go forward,” Del Conte added.

It’s unclear how the meeting went. It was first reported by the American-Statesman. Shortly afterward, Texas linebacker Juwan Mitchell pulled no punches with a social media post just after 7:30 p.m.

“For ONCE, we decide to voice our opinions about things that can help better the community. It seems they only got our front but not our backs,” Mitchell wrote. “The only thing on your mind should be EQUALITY.

“With that being said, I do not feel comfortable representing The University of Texas.”

On Mitchell’s tweet, Del Conte said, “I took no umbrage with what Juwan said on social media, he’s frustrated like so many of our student-athletes are. He and the team want immediate change, which is understandable, but we will be meeting with all of our teams, so we’re asking for their patience.”

Del Conte stressed the Hartzell is new to the job and will be meeting with other student groups on campus. A wide-ranging petition circulated across campus on Change.org outlining many of the same issues the football team put forth.

Some observers both in the Tower and within athletics are looking at the timeline. The Change.org petition was forwarded to the UT Student Senate two days before the football team went public with its requests.

That petition lists many of the same requests made by the UT football team — changing the name of several buildings on campus and changing or eliminating “The Eyes of Texas” school song. As of Thursday, the Change.org petition had 4,045 electronic signatures from well over 100 student organizations.

The electronic document with signatures is now 170 pages long, according to a copy of the petition viewed by the American-Statesman.

“President Hartzell is just getting started in his new role, and he will be meeting with student organizations, faculty and staff on campus, as well,” Del Conte said. “We look forward to all of these important conversations as we continue moving forward, but Wednesday’s meeting with the football team got us off to a great start.”

As athletic-friendly as he was, former UT president Gregory L. Fenves never wanted to go directly into the locker room. That was the players and coaches’ domain.

Hartzell likely can’t afford to sit back given the uproar created last Friday when more than 40 UT athletes from at least seven different sports tweeted a list of requests meant to change UT’s racial landscape.

“During the past few days, I have heard from many students, alumni, faculty and staff asking for meaningful changes to promote diversity and equity and ensure that black students at UT are fully supported,” Hartzell wrote in a statement Monday sent to the UT community.

“It is important, first, for me to listen closely — and then to work with the entire community to develop a plan to move the university forward,” he added.

Hartzell promised to work with campus student leaders to formulate a plan that can be implemented later this summer.

“I echo the sentiments of President Jay Hartzell in his letter to the UT community on Monday,” Del Conte wrote. “I look forward to joining him in listening, learning and developing a plan that ensures our Black community, students and student-athletes are fully supported.”

Editor’s note: This story was updated at 4 p.m. Thursday.