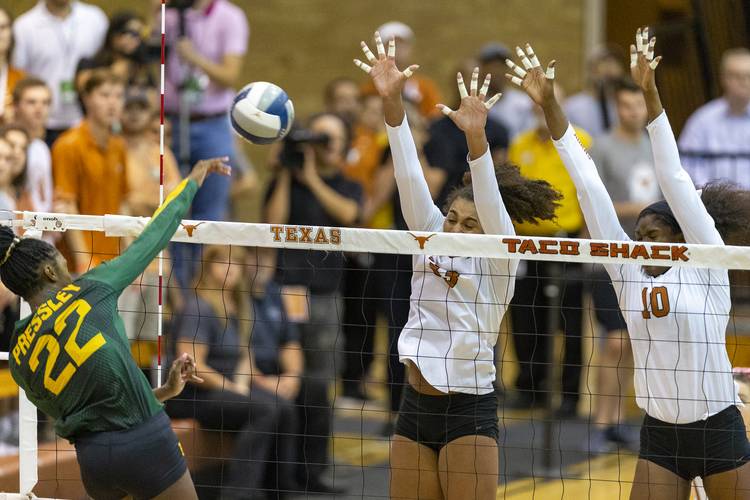 Texas outside hitter Logan Eggleston (33) and middle blocker Brionne Butler (10) look to block Baylor outside hitter Yossiana Pressley during a match inside of Gregory Gym on Oct. 23, 2019. [Stephen Spillman for Statesman]

If volleyball fans were expecting a surprise at the Big 12’s ballot box, it didn’t come this week.

Texas retained the top ranking in the conference’s annual preseason poll, which was released on Tuesday. With 62 points and six first-place votes, Texas bested Baylor’s 59 points and three first-place nods.

With 47 and 46 points, 2019 NCAA tournament qualifiers Iowa State and Oklahoma claimed the third and fourth spots. Kansas and TCU tied for fifth. Texas Tech, Kansas State and West Virginia rounded out the rankings.

The Longhorns must find a replacement for Micaya White, who led UT in kills in each of the past four years. Outside hitter Logan Eggleston, though, is back after an All-American sophomore season. On Monday, opposite hitter Skylar Fields and middle blocker Brionne Butler joined Eggleston on the preseason team. Setters Jhenna Gabriel and Ashley Shook, libero Sydney Petersen and middle blockers Asjia O’Neal and Molly Phillips have also received significant playing time.

That restocked lineup may be why six of the conference’s nine coaches favored Texas. (UT coach Jerritt Elliott was not allowed to vote for his own team). But seeing Texas atop the preseason poll is nothing new; this is the 10th straight season that Texas enters as the Big 12’s favorite. The Longhorns claimed at least a share of the conference championship in eight of the previous nine years.

Last season, Elliott took to pointing at the Longhorns logo on his shirt whenever he was asked about UT’s front-runner status. Volleyball prospects seemingly pick up books, room and board, and a target whenever they sign their scholarship agreement with Texas.

“I think we always have a target on our back just being Texas,” Eggleston said last year. “I think a lot of teams just know our history and always want to beat us.”

Of the Big 12’s last 10 preseason rankings, only the poll ahead of the 2017 season matched this year’s narrow margin between Texas and the predicted second-place team. Last year, Baylor and Texas split their season series and the conference championship before entering the NCAA tournament as the top two seeds. The Bears ended the season with a school-record 29 wins and a run to the national semifinals. Texas (23-4) was stunned in the tournament’s third round.

Under the direction of sixth-year coach Ryan McGuyre, Baylor claims the nation’s best player on its roster. Senior outside hitter Yossiana Pressley is coming off a season in which she was named the AVCA player of the year. Setter Hannah Sedwick and opposite hitter Marieke van der Mark also represented Baylor on the preseason team.

When questioned last year about Baylor’s emergence as a national power, Elliott said, “To me, it’s great. Our conference needs this, it’s what it’s about. I’m hoping that Ryan stays in the Big 12 for years to come because this is good.”

Read more: Separated by COVID-19, Jhenna Gabriel among the Texas volleyball players getting ‘hungrier than ever’

Texas has long been looking for a consistent rival in the Big 12. Kansas won the conference’s title in 2016, but missed the NCAA tournament two years later. UT is 291-50 in Big 12 play since Elliott arrived in 2001, and neither Texas Tech or West Virginia have beaten Texas since that hire. Nebraska, which left the conference in 2011, is the last Big 12 school to down the Longhorns in consecutive years.

Will Baylor be the team that finally pushes the Longhorns? Volleyball fans will have to wait and see. How long will they have to wait? That is currently up in the air.

Neither Texas or Baylor have released their 2020 schedules yet. The Big 12 has also kept mum about its volleyball teams.

Northern Iowa and Texas A&M have both announced that Texas will be their guest this fall. Central Florida coach Todd Dagenais said on Tuesday that his team is set to travel to Austin this season. Texas had also previously agreed to flip last year’s home match against Minnesota and road trip to Stanford. But due to the coronavirus pandemic and the uncertainty of its aftermath, those non-conference matches have likely been jotted down with pencils as opposed to pens.