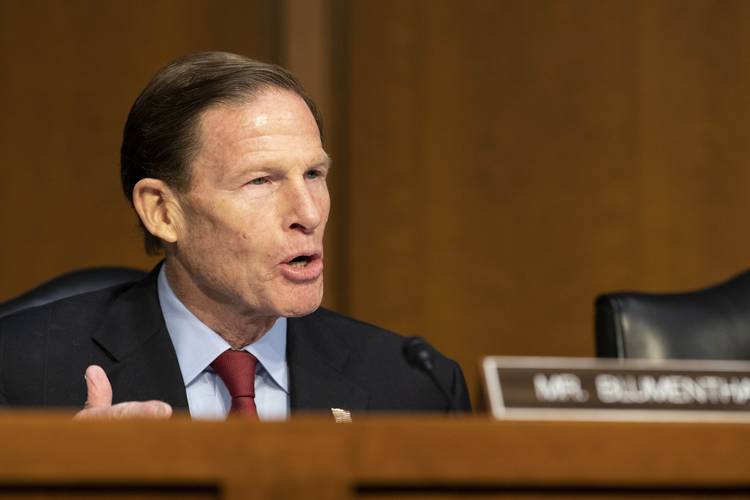 Sen. Richard Blumenthal, D-Conn., called on all schools to release information about the numbers of athletes who have tested positive for COVID-19 in a hearing in Senate chambers on Monday. [Hannah Gaber/USA TODAY]

The Senate Commerce Committee held a hearing Wednesday that was scheduled to discuss the ability of college athletes to make money from their name, image and likeness. It didn’t take long for the hearing to turn, sometimes pointedly, into a conversation about college athletes’ safety and welfare – particularly amid the COVID-19 pandemic.

Sen. Richard Blumenthal, D-Conn., said that he and Sen. Cory Booker, D-N.J., had introduced legislation Tuesday that would prevent schools from conditioning athletes’ participation in sports on the athletes signing pledges or waivers that could be interpreted as the athletes legally assuming the risk of getting sick as a result of their sports activity — a requirement that Blumenthal termed “unethical.”

Sen. Jacky Rosen, D-Nev., said the NCAA and its Division I schools should develop a single national strategy regarding testing and other approaches for dealing with a return to sports amid the pandemic, and NCAA Board of Governors chair Michael Drake, who is now Ohio State’s president emeritus said: “This is under discussion actively on a daily basis, and we will talk about this later on in this week. I certainly support that.  But this is a 50-state organization with 1,100 schools, and health policies tend to be guided locally.”

RELATED: Tom Herman urges Texans to ‘do your part to slow the spread of COVID-19’ in new PSA

Blumenthal also called on all schools to release information about the numbers of athletes who have tested positive for COVID-19, and Drake said that while privacy concerns have to be observed, “I think that’s a reasonable thing.” So far, some schools have said they do not plan to disclose any testing results.

All of this comes against the backdrop of the NCAA seeking help from Congress after three states passed laws that would make it easier for athletes to earn compensation for use of their name, image and likeness (NIL). The Board of Governors has approved, in principle, significant changes to the NCAA’s NIL rules, but the association wants a federal law on the issue and it seeks legal protection from antitrust lawsuits that might challenge changes it makes.

Sen. Marco Rubio, R-Fla., recently introduced a bill that that would require the NCAA to make NIL rule changes and give the association protection from legal challenges to the new regulations. Rep. Anthony Gonzalez, R-Ohio, has said he soon will offer another bill regarding NIL.

But on Wednesday, some members of the Commerce Committee — which is chaired by Sen. Roger Wicker, R- Miss. — signaled that they are not yet prepared to grant antitrust protection to the NCAA, and certainly not without that being accompanied by additional health and welfare protections for the athletes.

Sen. Jon Tester, D-Mont., asked Sankey whether he objects to federal NIL legislation also addressing long-term health coverage for athletes, and Sankey said: “I’ll do the dangerous thing, which is to say, no, I don’t. But I don’t know enough of the details to be the expert at this point.”

Sen. Maria Cantwell, D-Wash., the committee’s ranking member, set the stage in her preliminary remarks during which she noted that athletes help produce billions of dollars for the NCAA and its schools and said: “The status quo is especially jarring as we look at this national reckoning on racial justice and civil rights issues. … I am not a fan of an NCAA antitrust exemption. I think that quashing all momentum for change with this blunt legal instrument is both unnecessary and ill-advised. Similarly, I oppose Congress fully deferring to the NCAA on just coming up with the rules on name, image and likeness.”

Cantwell also said: “I know that the pandemic is not relenting. I want to make sure we’re putting into place safeguards to protect our student-athletes as we look forward to what the college environment might be this fall.”

The connection between the two issues was made squarely moments later during the opening statement of one of the witnesses, University of Baltimore law professor Dionne Koller.

“Rather than seeking protection from Congress to impose economic restraints on athletes, the NCAA should craft rules that better support athletes’ health, safety and well-being,” she said. “Indeed, if athletes are currently able to sign waivers to facilitate their return to practice during a global health pandemic, they should be permitted to make deals to market their name, image and likeness.”

Blumenthal later drove home the point in an exchange with Drake. As revealed by the Columbus Dispatch two weeks ago, Ohio State required athletes to sign a document in which they pledge to follow safety protocols and agree that they “understand that although the university is following the coronavirus guidelines issued by the CDC and other experts to reduce the spread of infection, I can never be completely shielded from all risk of illness caused by COVID-19 or other infections.”

Blumenthal said: “I think the question for us is … how do we make sure that (athletes) are not maybe inadvertently victims of a process that puts them behind profit.”

While Drake insisted that Ohio State’s document was not a legal waiver, Blumenthal bored in on the school’s use of it.

Blumenthal: “Isn’t that unethical? And shouldn’t it be illegal?”

Drake: “I’ll say that I don’t support the waiver or an assumption of risk in a legal sense. What we want to do is to make sure that people are behaving in a responsible fashion to protect themselves and their community.”

Blumenthal: “So, so on behalf of Ohio State University, if any athlete ever sued your institution, you would say no rights had been foregone or waived or sacrificed?”

Drake: “I certainly would say that.”

Blumenthal: “I hope your lawyers agree with you.”