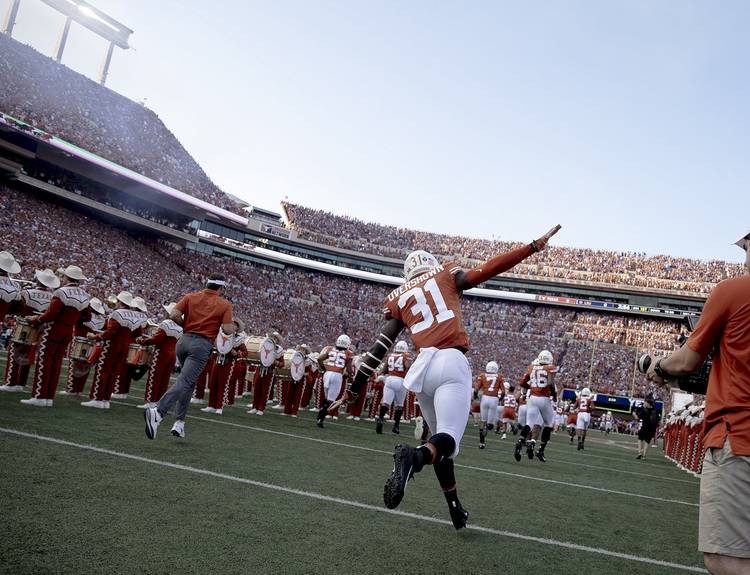 Texas defensive back DeMarvion Overshown (31) runs onto the field before a game on Sept. 7, 2019 in Austin. [NICK WAGNER/AMERICAN-STATESMAN]

In a lengthy message that was published on his Twitter account on Thursday, Texas football player DeMarvion Overshown announced that he “will be sitting out all team activities.”

Overshown’s statement comes three weeks after nearly 40 student-athletes publicly called for Texas to address racial issues on its campus. In a coordinated set of tweets, the protesting athletes called for the changing of some buildings’ names and the replacement of the “Eyes of Texas” as the school’s fight song. The placement of a statue of Julius Whittier, the football program’s first Black letterman, was also listed among the demands.

Overshown, who will be a junior this fall, tweeted on Thursday that the athletes had since been told that work was being done behind closed doors. They, however, had not seen any significant changes. So, Overshown will not participate in any team activities until “real action is taken and changes are made.”

Overshown cited WNBA star Maya Moore as a role model for this decision. Last year, Moore stepped away from her career while fighting for the overturned conviction of a family friend.

Said Overshown: “First off, I will like to start by saying that I have a lot of love for the teammates, coaches and The University of Texas. As most of you know, the Student-Athletes put out a statement three weeks ago demanding some changes that are long over due. We have been told that things are being done behind close doors but have yet to see any changes. We are constantly preached urgency throughout the program and I feel that the university should be held to the same standard. I watched WNBA All-Star Maya Moore sit out a whole year because of something that meant so much to her. With that being said, until real action is taken and changes are made I will be sitting out all team activities. I will support my team in whatever they do but this is something I’m very passionate about and I can not continue to perform for a program that doesn’t show me the same love and support I do for them.”

Until We Are One. pic.twitter.com/OQN7xmjFRd

On May 25, George Floyd was killed in Minneapolis by a white police officer who knelt on his neck for almost nine minutes during an arrest. The death of Floyd, a 46-year-old Black man, has set off a wave of nationwide protests.

Some of those protests have come from the platforms used by Overshown and his teammates. Nine days after Floyd’s death, UT receiver Brennan Eagles said that he was “not going to play another snap knowing what’s going on in our society due to color and the system being broken.” On June 17, linebacker Juwan Mitchell stated that he didn’t “feel comfortable representing The University of Texas.”

Between Eagles and Mitchell’s proclamations, athletes at Texas engaged in their own social activism. Members of the football team joined Texas coach Tom Herman and police officers on a march to the state capitol on June 4. The demands issued by the student-athletes came with a declaration that the football players would no longer participate in events that involved recruits and donors.

Texas athletic director Chris Del Conte and interim president Jay Hartzell have also met with the football team. However, Mitchell made his feelings known shortly after that meeting on June 17. (Mitchell has since deleted that tweet).

Eagles, Mitchell and Overshown are all contenders for playing time this fall. Recruited out of Arp as a four-star defensive back, Overshown had recently moved to the linebacker position. In 17 career games, the 6-4, 215-pound Overshown has compiled 19 tackles, four pass deflections, two sacks and an interception.

A Texas spokesperson told the American-Statesman that the program did not have any comments about Overshown’s decision. The football players at Texas are currently participating in voluntary summer workouts. As of Thursday afternoon, Overshown, Eagles and Mitchell were all still listed on the Longhorn roster.