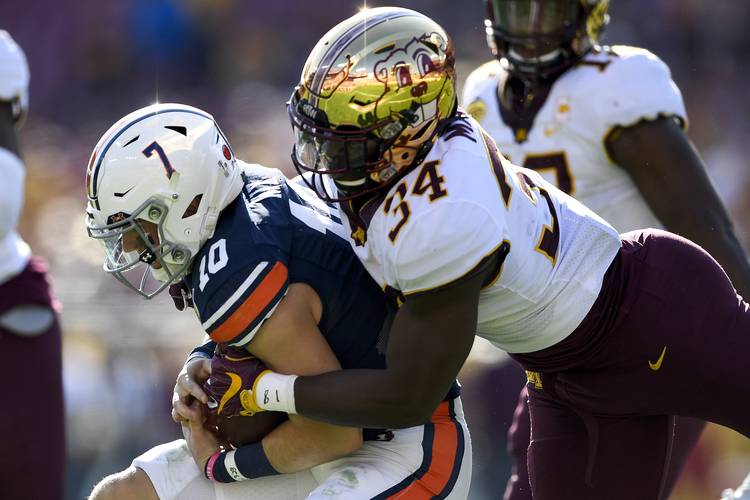 Auburn quarterback Bo Nix scrambles with the ball as Minnesota defensive lineman Boye Mafe wraps him up during the Gophers' win in the Outback Bowl. With so many key defensive departures, Mafe will be a key piece to this year's Gophers defense. (Douglas DeFelice/USA Today)

The Gophers made big strides in 2019, notching a pair of wins over top-10 teams (No. 5 Penn State and No. 9 Auburn) and dramatically improving their numbers in all major offensive and defensive metrics. But heading into the season, there sure are some big cleats to fill on defense. Minnesota parted was with its top three tacklers, the top two sack producers and the top two interception leaders, including Antoine Winfield Jr., the Big Ten’s defensive back of the year who had seven picks. The offense should be good again, and if the defense can figure things out, Minnesota can again be a factor in the conference.

About the Golden Gophers

There were two important offseason developments on the coaching front — offensive coordinator Kirk Ciarrocca jumped ship for Big Ten rival Penn State, and head coach P.J. Fleck, coming off a big season, was awarded a contract extension that locks him in through the 2026 season. The new OC, Mike Sanford Jr., was a Boise State quarterback in the early 2000s who went 9-16 as the head coach at Western Kentucky before serving as Utah State’s OC and quarterbacks coach in 2019, where he developed Jordan Love into a first-round draft pick. … WR Rashod Bateman has been named to a second-team Walter Camp Preseason All-American. … Five players went in April’s NFL draft, but four of those rookies will at least already have a friend on the team; safety Antoine Winfield Jr. and receiver Tyler Johnson both were taken by the Buccaneers, and linebacker Carter Coughlin and cornerback Chris Williamson both went to the Giants in the seventh. … Recruiting has been going well — the Gophers’ 2021 class ranks 18th — but they did lose a commitment from four-star quarterback Sam Jackson not once, but twice; he originally committed to Minnesota in February 2019, then decommitted last fall, then pledged to Minnesota again in April, then backed out again this summer. He’s now pledged to Big Ten foe Purdue. … Former Gophers coach Jerry Kill, now a special assistant at TCU, contracted the coronavirus, but the 58-year-old has since recovered.

A new offense: Tanner Morgan became the first Gophers quarterback to ever pass for 3,000 yards and 30 touchdowns in the same season. But with the departure of record-setting running back Rodney Smith and record-setting receiver Tyler Johnson, he’s gone from a 2019 triplet to a 2020 only child. Well, almost. The reigning Big Ten receiver of the year (Rashod Bateman) is back, and that’s good news because the Gophers must work with a new offensive coordinator; out goes Kirk Ciarrocca, who’s now at Penn State, and in comes former Notre Dame OC and Western Kentucky head coach Mike Sanford Jr.

Pacing the run: Just because Smith — Minnesota’s career all-purpose yardage leader — is now a Carolina Panther, it doesn’t mean the Gophers’ running game is in trouble. Mohamed Ibrahim has done it before. When Smith went down with an injury in 2018, Ibrahim rushed for more than 1,100 yards and nine touchdowns, and he had a 140-yard game with a touchdown in the Outback Bowl win over Auburn. And the entire offensive line is back this season.

A tale of two lines: The offensive and defensive lines are in exact opposite situations. The O-line is deep and talented, as all five starters are back, including LT Sam Schleuter, a fifth-year senior who was the team’s anchor up front. Connor Olson has started 38 games and is solid at center. And the right side could be special, too. But the defensive line is in rebuilding mode. All four starters must be replaced.

Where Minnesota ranked nationally in various statistical categories last season — and how the Golden Gophers ranked in 2018.

This school’s head coach is a former coordinator at Oklahoma and has won a national championship.