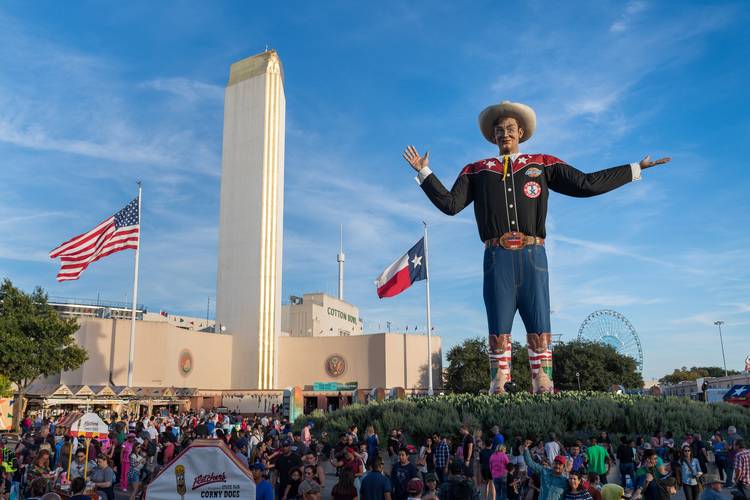 State Fair of Texas officials announced Tuesday they were canceling the annual extravaganza over COVID-19 concerns, but their decision has no impact on the Texas-Oklahoma football game.

Calling it “an extremely tough decision,” State Fair board chairwoman Gina Norris said health and safety was the top priority. More than 2.5 million people attend the Fair every year in Dallas, including those from Austin and Norman, Okla., on the second Saturday in October.

This is the first time since World War II the State Fair has not opened. The Texas-OU clash was still played in Dallas from 1942-45; the Longhorns won all four years.

“In the current climate of COVID-19, there is no feasible way for the Fair to put proper precautions in place while maintaining the Fair environment you know and love,” Norris said in a statement posted on the Fair’s website.

Texas athletic director Chris Del Conte confirmed to the American-Statesman that the Fair’s decision has no impact on Texas-OU. The game is still scheduled for Oct. 10 at the Cotton Bowl on the fairgrounds.

“We know the decision to cancel the fair was an extremely difficult one for everyone involved and that we all are dealing with a very fluid situation during these unprecedented times,” Del Conte said later in a statement.

“But, as we’re doing with all of our fall season planning, we will continue to monitor the situation closely, work through contingencies and make the best possible decisions we can with the health, safety and well-being of everyone involved as our number one priority.”

Texas and Oklahoma both control their own ticketing process for the game. It’s still unclear whether the two schools will allow a full house. Gov. Greg Abbott’s current orders mandate a 50% capacity rate for professional and college stadiums due to coronavirus concerns.

“We understand and respect the decision made by the State Fair of Texas and acknowledge that it was an extremely difficult one,” OU athletic director Joe Castiglione said in a statement. “Our hope remains that we can play the OU-Texas game at the Cotton Bowl, but obviously every aspect of our season requires constant monitoring and planning.

“The best thing all of us can do at this time is closely follow CDC guidelines to reduce the spread of the virus,” Castiglione added.

Fair officials went the extra step of noting that “the NCAA, respective conferences and participating universities” make the final decisions about games at the Cotton Bowl. Prairie View A&M and Grambling State also play there during the Fair.

As for whether the Texas-OU game will happen at all, it remains to be seen. Currently, the Longhorns’ 2020 season is scheduled to begin in September as scheduled. But coronavirus concerns are keeping everything and everyone in flux.

Texas and OU have played since 1900. Last season was the 91st consecutive year the game was played in Dallas. UT is 62-48-5 in the all-time series.

On the State Fair’s website, a photo of Big Tex stood in the twilight with the Dallas skyline in the distance.