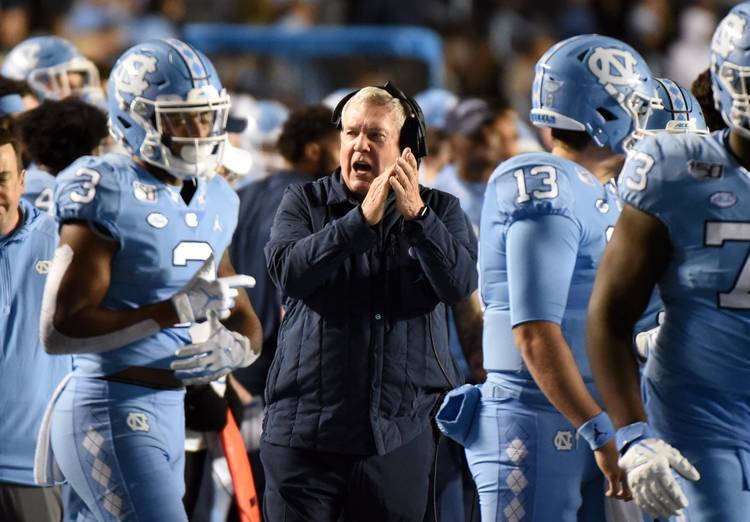 On the plus side, Mack Brown's North Carolina Tar Heels made it to a bowl game in his first year. On the other side, all six of his losses were b a touchdown or less. (Rob Kinnan/USA Today)

Should fans and pundits believe in Mack’s magic? Naysayers can rightfully point out that North Carolina only won seven games and barely secured a bowl berth during Mack Brown’s return to Chapel Hill. The believers, though, will point out that North Carolina went 2-9 in 2018. The Tar Heels won their final three games by a combined score of 152-30 and a lot of talent is returning to the offense. Clemson needs someone to play in the ACC title game. Why can’t North Carolina beat out Virginia Tech and Miami for that gig?

About the Tar Heels

North Carolina signed the nation’s 19th-best class in the 2020 recruiting cycle. And Tony Grimes, a five-star prospect and the nation’s No. 1-rated cornerback, has been joined by 11 four-star pledges in the 2021 class, which currently ranks third nationally behind only Ohio State and Clemson. … North Carolina has two new coaches in Jovan Dewitt (special teams, outside linebackers) and John Lilly (tight ends). … Heck (Houston, fourth round) and Strowbridge (fifth round, Miami) were selected in the NFL draft. … Brown, who won 158 games and a national championship at Texas, could conceivably pass Nebraska’s Tom Osborne (255 wins) for seventh place on college football’s all-time wins chart this season.

Close calls: The Tar Heels may have been a lot better last year than their 7-6 record suggests. All six of North Carolina’s losses came by seven points or less. One of those defeats was a 21-20 loss to Clemson, the eventual national runner-up, in which UNC failed on a two-point conversion with 1:17 left. North Carolina also was beaten by both Pittsburgh and Virginia Tech in overtime. That 43-41 loss to Virginia Tech? That took six extra sessions to decide.

Aerial attack: Last year, Howell ranked second among the nation’s freshmen in passing yards and his 38 touchdowns were a school record. Thanks to the returning talent in his huddle, he could better those numbers this fall. UNC entered last season with three 1,000-yard receiving seasons in its history (Hakeem Nicks’ 1,222-yard season in 2008 was vacated due to NCAA violations). But last season, Brown and Newsome both topped 1,000 yards. A third target — Beau Corrales, a rising senior who starred at Georgetown High — turned 40 catches into 575 yards and six scores.

Tough start: The good news? Neither Clemson nor Louisville is on this year’s schedule. In fact, five of the eight schools that the Tar Heels will play in conference play posted losing records in 2019. North Carolina’s schedule isn’t a cakewalk, though. The Tar Heels open against Central Florida (No. 20 in our poll) and Auburn (stay tuned) teams that ranked 24th and 14th in last year’s final AP poll. The first home game is against an FCS team, but James Madison did reach its division’s championship game last year.

Where North Carolina ranked nationally in various statistical categories last season — and how the Tar Heels ranked in 2018.

This school has produced three Heisman Trophy winners — including two in the 1990s.