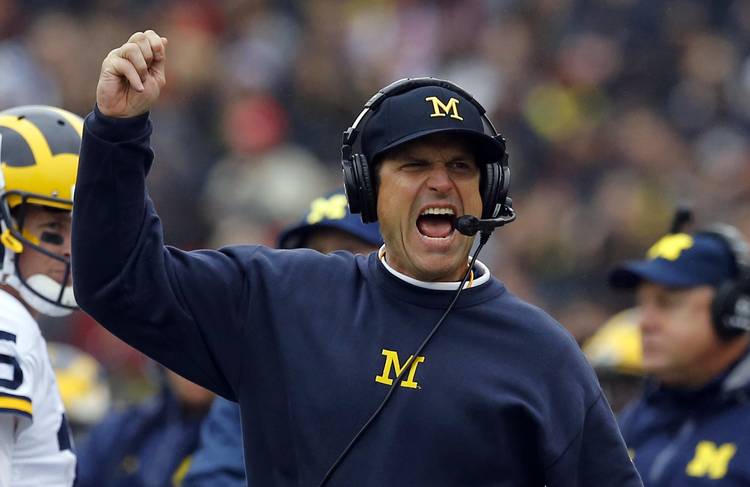 Michigan head coach Jim Harbaugh is coming off a 9-4 season, but one that ended with back-to-back lopsided losses to Ohio State and Alabama. (Patrick Semansky/Associated Press file photo)

As is often the case, it’ll probably come down to quarterback. Shea Patterson, who threw for 3,000 yards and 23 touchdowns last year, is now with the Kansas City Chiefs. So the offense will be in new hands. It’ll be one of Patterson’s former backups, either Joe Milton or Dylan McCaffrey, Christian’s little brother. Oh, and four of the starting five offensive linemen from 2019 are gone, too. Only 36% of last year’s offensive production is back. So yeah, there’s some cause to be concerned in Ann Arbor. Still, there’s talent at the skill positions and Jim Harbaugh continues to get it done in recruiting; Michigan’s 2020 class ranked 13th nationally and the 2021 group is currently ranked No. 8. The 2019 season ended with a thud — back-to-back, blue-blood blowouts to dreaded Ohio State and then to Alabama in the bowl game. That left a sour taste in the mouths of Wolverines fans, and Harbaugh’s seat is just a little warmer than it was at this time last year.

Michigan lost a lot of talent from its 2019 team. A lot. Ten Wolverines went in the NFL draft — that tied with Ohio State for the second-most behind LSU’s 14 — and even more went to the NFL as undrafted free agents. That included starting quarterback Shea Patterson, whose departure has left a gaping hole for offensive coordinator Josh Gattis to figure out. WR Tarik Black is now at Texas as a graduate transfer. … The coronavirus pandemic has pretty much shut down recruiting nationally, at least in terms of campus visits until the end of August, but Michigan is doing OK. Since visits were put on hold in mid-March, the Wolverines have added 17 commitments and are working on a top-10 class. … Harbaugh, who was set to make $8.05 million this year, took a 10% pay cut (along with men’s basketball coach Juwan Howard and Michigan athletic director Warde Manuel) to help an athletic department anticipating a $26.1 million deficit in the next fiscal year.

Calling card: One thing Michigan has been able to bank on in recent years is the defense; the Wolverines have been a top 10-worthy unit the last two years, ranking near the top of the national bests. This year’s secondary will be filled with new names, but the front line at least has two bookend players who are excellent candidates to build around — defensive ends Kwity Paye, who decided not to jump to the NFL and instead return for his final season, and Aidan Hutchinson, who was an honorable mention all-conference player. Defensive tackle Carlo Kemp was given a sixth year of eligbility. And linebacker Cameron McGrone, who took over in the middle spot because of an injury to former starter Josh Ross, returns as does Ross, who has moved to the outside. The defense once again should be good.

A new line: The good news is that sophomore Jalen Mayfield is already one of the top left tackles in the Big Ten, if not the country. The bad news is that in terms of returning linemen, that’s it for Michigan. Last year’s starting left guard, center and both right side spots  of the line all went in the NFL draft. So whoever ends up being the quarterback will rely on promising newcomers up front like Andrew Stueber (6-7, 334), who returns after missing last season, and Ryan Hayes (6-7, 299). Whoever ends up starting at the three interior positions will have to grow up quickly.

A numbers game: Michigan has talent. So is this the year that Harbaugh breaks through and leads UM to the top of the Big Ten mountain? Every year, that question is asked. But consider this. The Wolverines have won nine,10, eight, 10 and 10 games the past five years. Which means they also have lost four, three, five, three and three games each year, too. It’s the always-tough schedule. This year’s has been rated the 11th toughest in the country. Michigan opens on the road at Washington and ends at Ohio State, which blistered them last year in Ann Arbor. In between there’s a three-week gauntlet of Wisconsin, Penn State and Michigan State. Recent history says that’s why you should expect another good-to-pretty good season, with eight or nine wins, give or take.

Where Michigan ranked nationally in various statistical categories last season — and how the Wolverines ranked in 2018.