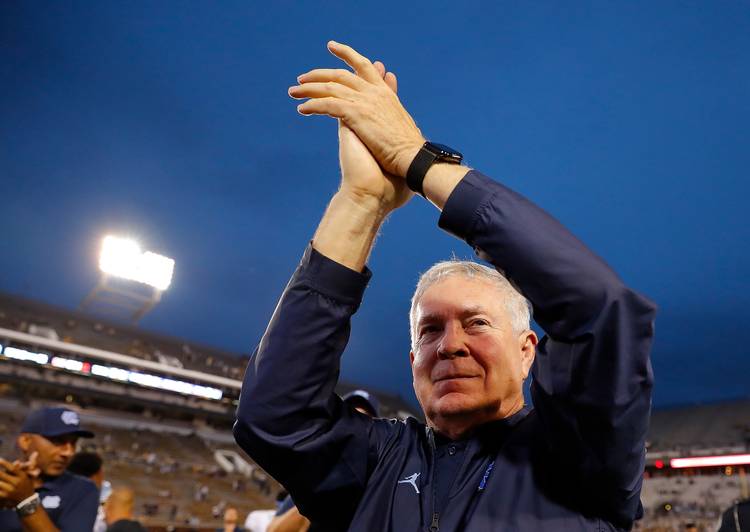 “Now we have a clear path to the playoffs. You win the ACC, you're going to be in the playoffs and if you're in the playoffs, you have a chance to win the national championship,” Tar Heels coach Mack Brown said this summer. The former Texa coach is entering his second season of his second UNC stint. (Kevin C. Cox/Getty Images/TNS)

CHARLOTTE, N.C. — He was hired in Chapel Hill in 1987 to replace Dick Crum, whose teams had stumbled, producing one winning season in four years. After going 1-10 in 1988 and again in ’89, Mack Brown’s teams began a steady climb, producing eight straight winning seasons.

Brown returned to the Tar Heels last season, years after eventually winning a national championship at Texas, being inducted into the College Football Hall of Fame and becoming an analyst for ESPN. And in his second act, he is determined to take North Carolina to places it has never been — and that includes getting past that juggernaut across the state line known as Dabo Swinney’s Clemson Tigers.

“How far are we from winning (an ACC) conference championship?” Brown said. “I really think it’s out there for us. Clemson’s a great team — they’re not a good team. Dabo’s done an unbelievable job, and that’s the goal for all of us (to beat Clemson). To get out of this league right now, you’ve got to beat Clemson, and that’s really, really hard to do, but we’ve got to continue to keep recruiting. We’ve got to win the (ACC) Coastal (Division) before we can worry about Clemson.”

Brown has lined up a phenomenal recruiting class that ranks third in the nation behind Ohio State and Clemson on 247Sports’ composite ratings. In a wide-ranging interview where he was engaged, funny and open, Brown discussed chasing Swinney, who he would compare quarterback Sam Howell to and the need to celebrate front-line workers during the pandemic.

But he often came back to his biggest goals for his second run as coach in Chapel Hill. He wants to win bigger than any coach there, including Brown himself, has ever won:

Is winning a national title more realistic now than it was during your first run?

We don’t play Clemson for awhile again unless it would be for the conference championship. But unlike the last time we were here in ’97, when we were No. 4 and we were playing Florida State, who was No. 1 … even if we had beaten Florida State, I’m not sure we would’ve gotten to the BCS because our league wasn’t as strong. It’s one of the reasons I left.

Now we have a clear path to the playoffs. You win the ACC, you’re going to be in the playoffs and if you’re in the playoffs, you have a chance to win the national championship. Nobody takes lightly how good Clemson is, and everything you do, you try to put yourself in position to win your division championship, your conference championship and then win the national championship. That’s what we came back to do. We’ve done it. In fact, I’ve said we won one at Texas and lost three. I understand how to do both of those. I’d rather win. They’re more fun, but that’s our goal and that’s where we’re headed.

What has life been like for you during this pandemic?

As terrible as it is, we’re all learning to communicate better. We’re communicating with our boosters, our season-ticket holders better. We’re communicating with our team. Our staff meetings are on Zoom. We’re having high school coaching clinics and they’ve been wonderful. Probably when we get through with this stuff, we’re going to do things differently than we did before just because of what we’ve learned.

As an older coach, do you have any concerns coaching in COVID-19 without a vaccine?

If they are going to have our players back on campus and if they’re going to have our coaches back on campus and allow us to coach and play, they’re gonna make sure we’re safe. I’m in good shape. I’m being careful. I’m doing everything the guidelines tell me to. I wash my hands 25 times a day, I think. I’m putting sanitizer on them all the time. I’m being careful with social distancing. I’m wearing a mask when I’m supposed to. But there’s a lot of questions that need to be answered.

How excited are you about this class of 2021? And do you feel like you’re beginning to put a fence around the state (UNC has commitments from eight of the state’s top 20 players, including five of the top 10).

That was our plan. … Last year at this time we were selling hope. We are hoping fans would come. We would hope we win some games. We would hope our facilities would improve. Now we can sell facts. We have a chance to win every game. We are recruiting really well. We’ve redone our complete facility; 92% of our season tickets have been renewed. We’re at a really great place moving forward and I’m really excited for it.

So you think you can build a national champion with home-grown talent?

I do. I think more now than when I was here before. … There’s a lot of players in this state I think that are under-recruited in some cases simply because maybe it’s a smaller school or maybe a different part of the state that’s not very populated and a lot of coaches are not going to go there. They’ll go to Greensboro. They’ll go to Charlotte. But they’re not going to go to a small town in eastern North Carolina, and we may find a guy that’s really a good football player that isn’t as highly recruited simply because he’s hard to get to.

How has recruiting changed now versus your first go-round at UNC?

I think I have a better feel of when to get out of a player if he’s not interested in us. You’d rather be fifth than second, because if you wait until the end, and he’s not coming, you not only lose him but you probably lose the other two you were recruiting at that position because you waited too late. So I ask a lot more direct questions than I did before.

The staff suggests who we offer and I make those decisions now, and I thought even at Texas, at the end, we probably took some guys off video and I didn’t meet them all in person and we didn’t watch them all in person. We want to see these guys in person. I’m not going to offer and take a guy at North Carolina that I don’t meet. And if I don’t like him, I’m not taking him.

How good can Sam Howell become?

When I first saw him in high school, some people compared him to Baker Mayfield, (who) had just won the Heisman, so that’s a good comparison and I see that comparison. But for the ones I’ve coached, he’s more like Colt McCoy because he’s so accurate. … Sam is a worker. He had over a 3.0 his first year at UNC. He has absolutely no hobbies. He is in that building every day studying every minute detail about football. … He’s got tremendous faith. I was trying to find him one Sunday morning and he texted me and said, ‘Coach, I’m in church, can I call you right after I get out?’ I said, ‘That’s good. I’ll let you pray before you come back to me.’