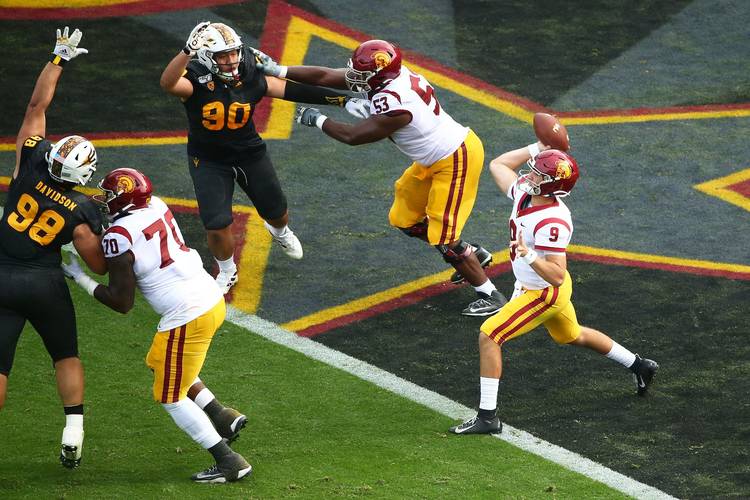 Southern Cal always seems to be on the brink of breaking through — or just down. The Trojans would have faced an early litmus test in Arlington with an opener against Alabama, but that got canceled. In conference, they must travel to Oregon, Utah and Stanford, but the won’t get the traditional date against Notre Dame. The Trojans won their final three regular-season games before a colossal in the Holiday Bowl. Head coach Clayton Helton has survived after going 13-12 the last two years but hasn’t budged from the hot seat. He had to make over his staff, too.  USC appears loaded for a comeback year with the Pac-12’s best quarterback in rising sophomore Kedon Slovis and a bevy of talented receivers like Amon-Ra St. Brown and Tyler Vaughns and five-star redshirt freshman Kyle Ford, but a subpar running attack and a leaky defense that gave up a school-record 408.5 yards a game have to be fixed or the rumors of Helton’s demise will continue to swirl.

Helton hired six new assistants, including four notable ones — defensive coordinator Todd Orlando, formerly of Texas; DBs coach Craig Naivar, former safeties coach at Texas; CBs coach Donte Williams, formerly of Oregon and the Pac-12’s recruiter of the year; and special teams coach Sean Snyder, the son of former Kansas State coach Bill Snyder. Graham Harrell was once considered the front-runner to replace Tim Beck as Texas’ offensive coordinator, but remained in LA while Tom Herman hired Mike Yurcich away from Ohio State. And we’ll see if Orlando succeeds with what looks like a 2-4-5 alignment after refusing to use a four-man front at Texas. … As nice a rebound season, relatively, as 2019 was, it didn’t translate into a banner recruiting crop. USC’s class ranked dead last among Pac-12 teams before rallying to finish in 10th place with the likes of wide receiver Gary Bryant Jr., defensive lineman Tuli Tuipulotu — whose brother Marion is the starting nose tackle — and tight end Jack Yary, the son of NFL Hall of Famer Ron Yary. … former five-star recruit JT Daniels, who went down in the season opener and lost his starting job, transferred to Georgia.

Where’s Bru?: Sophomore wide receiver Bru McCoy is finally settling in on the West Coast after a bizarre 2019 double transfer from USC-to-Texas-to USC, a mysterious illness during last year’s redshirt season and extreme criticism that included death threats. He told B/R Mag in an excellent article that “people dehumanized me. I have to prove to myself that it wasn’t all for nothing. All this misery.” This one-time Reggie Bush wannabe also said, “Honestly, the thing that was wrong with Texas was it wasn’t USC.”

Settling in with Slovis: Just when Trojan backers thought all was lost when five-star phenom JT Daniels went down with a season-ending knee injury in the first game against Fresno State, Slovis came to the rescue. The 6-2, 200-pound quarterback threw for 3,502 yards, completed 72% of his passes and became the league’s offensive freshman of the year. He did suffer an elbow strain in the bowl game, but should be fine, supported by three offensive line starters or four if guard Andrew Vorhees bounces back from ankle surgery. Daniels, meanwhile, is now at Georgia.

He’s Tuf enough: NFL scouts always rave about the skill personnel that comes out of USC, but its top projected player is inside rusher Jay Tufele, an All-Pac 12 defensive tackle and the key cog in a front that returns five of six starters. He’s a redshirt junior from Salt Lake City who could ease his way into next year’s first round of the NFL draft and should get big help from Drake Jackson, a freshman All-American who came off the edge to make 5.5 sacks.

Where USC ranked nationally in various statistical categories last season — and how the Trojans ranked in 2018.

This school has produced two Heisman Trophy winners and has a dog for a mascot.