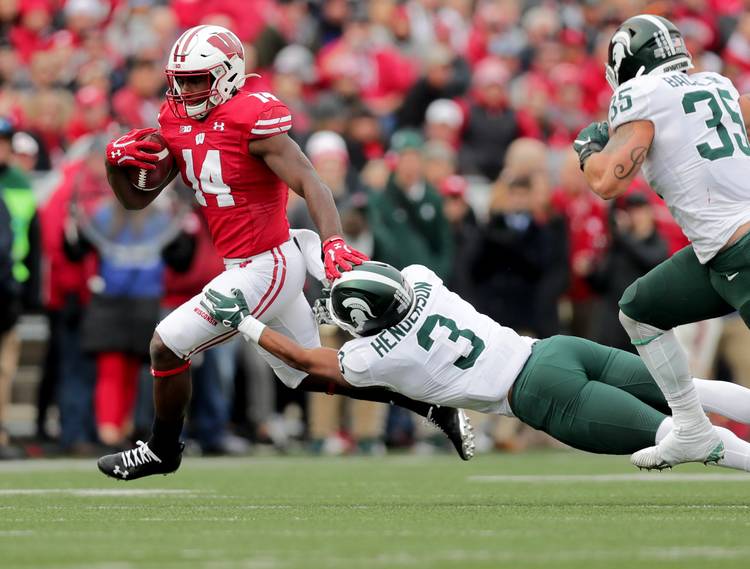 Can an Austin native help Wisconsin nab an elusive College Football Playoff spot? Running back Nakia Watson, a bruising 230-pound running back from Westlake, certainly looks the part for a physical team hungry for a fifth Big Ten West title in the past seven years and a return trip to the conference title game. A road date at Michigan on Sept. 26 looks like the biggest regular-season challenge, but either Ohio State or Penn State will likely be there waiting in the title game.

Wisconsin was ranked 20th in our preseason poll last year.

Wisconsin certainly has proven its bona fides when it comes to producing big-time talent in the backfield, but a back like Taylor won’t be easy to replace. He’s the first player in NCAA history to rush for 6,000 yards in a three-year span and he left for the NFL — a season early — as the fourth-leading rusher in FBS history. He won’t be easy to replace. But there are other roster holes, too. Two Badgers went into the transfer portal: Bradrick Shaw, a long-time reserve running back, and Aaron Cruickshank, who had emerged as one of the top kick and punt returners in the country. Wisconsin signed Jalen Berger, a four-star running back, and maybe former NFL receiver Alvis Whitted will spark the offense as the Badgers’ new receivers coach.

Hello, Chap: Westlake product Nakia Watson looks like the next tailback up in a long line of Badgers stars. A first-team, all-Centex selection by the American-Statesman as a senior in 2017, Watson ran for 1,916 yards and 27 touchdowns and added another 327 yards and six scores on 18 receptions in his final season for the Chaps. The 5-11, 230-pound redshirt sophomore looks like a natural fit in Wisconsin’s power running game; he finished second behind Taylor with 331 yards on 4.5 yards per carry with two touchdowns last season.

Passing fancy: Regardless of who gets the carries for the offense, returning quarterback Jack Coan looks poised for a big year. He threw for 2,727 yards and 18 touchdowns with just five interceptions last season, and returning receivers Kendric Pryor and Danny Davis III combined for 53 receptions. If the passing game were to bog down, former four-star recruit Graham Mertz could step in and please the fan base, which always loves the No. 2 quarterback.

Big men on campus: Joe Thomas, Mike Webster, JJ Watt, Tim Krumrie. The NFL has long been the landing spot for such Wisconsin linemen from both sides of the ball, and the current crop looks primed to add to the legacy. Tackle Cole Van Lanen and guard Logan Bruss anchor what should be another formidable offensive line, and five-star freshman Jack Nelson waits in the wings. Defensively, Wisconsin finished fourth in the nation and welcomes back 18 of its top 20 tacklers, including a massive noseguard duo of Keeanu Benton and Bryson Williams and solid ends in Isaiahh Loudermilk and Garrett Rand.

Where Wisconsin ranked nationally in various statistical categories last season — and how the Badgers ranked in 2018.

This school has produced three Heisman Trophy winners, including one who briefly played college football in the state of Texas and is still playing in the NFL.