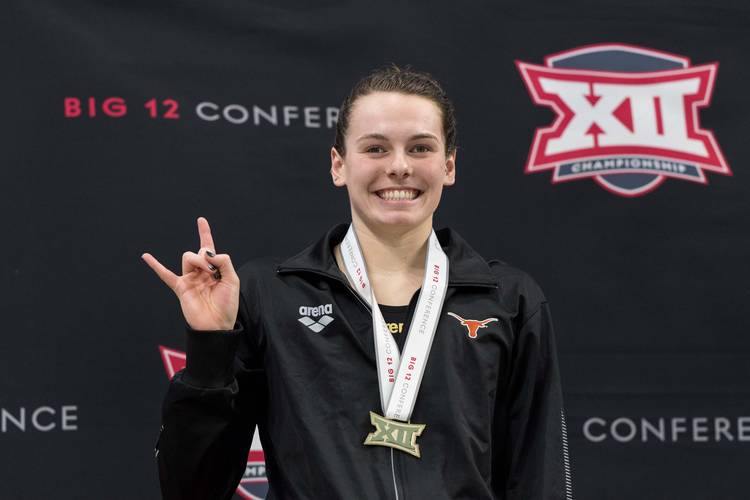 It is the paradox of becoming a great athlete: To do so requires constant dissatisfaction.

No matter the achievement, it could have been better. No matter what you did, what will you do next?

More than most, Claire Adams understands. More than anyone, her luck in Olympic years was wretched.

In 2012, she was just 13 and thrilled to be at the Olympic Trials. In 2016, she broke her hand a week before the trials, effectively ending a bid to become Carmel, Ind.’s first U.S. Olympic swimmer. In 2020, a pandemic postponed the Olympics.

In 2021, if there is an Olympics, they will go on without Claire Adams. At 21, she has retired from swimming.

“I think a lot of us get caught up in the, ‘Oh, I didn’t win at nationals. Or I never swam in an Olympic Trials final.’ That was something that was on my radar,” the former Texas swimming star said. “I did some cool stuff I should be proud of. I have a lot to work through and think about and reflect on from my 12 years.”

When Adams was 9, her family relocated from Houston. Her parents put her in Carmel Swim Club so she would make friends. She did that, and so much more.

She is the most decorated high school swimmer in Indiana history, going 16-for-16 in state titles. Carmel had arguably the greatest high school team ever in 2015. Later that year, Adams won two U.S. titles at age 17, set an under-18 world record and won a silver medal in the World Junior Championships.

In 2016, Carmel broke the national record for consecutive state championships, and Adams missed the national prep record in the 100-yard backstroke by just 0.22 seconds. Improvement at the University of Texas was incremental, even as she won 23 Big 12 titles and became a three-time conference swimmer of the year.

But Adams was clicking in 2020 — “I definitely was in a different place my whole senior year” — and lowered her school record in the 100 backstroke at February’s Big 12 meet. She ranked No. 4 in the NCAA, higher than she had ever placed. Her time of 50.51 seconds made her 15th-fastest American ever. Texas coach Carol Capitani calculated Adams was set to become the seventh woman under 50 seconds.

“She was primed for the NCAA meet,” Capitani said.

There would be no NCAA meet. No Olympic Trials or Olympics, either. Adams was done.

“I see that as a perfect ending, in my mind,” she said.

She left the Texas team “in our best place,” making her exit easier. Yet it has not been easy.

RELATED: Texas swimmers Adams and Pash, once and future teammates, blazed trail from Carmel to Austin

Something was taken away that was beyond her control. That applied to all teammates, all swimmers, and she asked herself: Why should my disappointment be worse than anyone else’s?

“I’m a very healthy human being,” she said. “I have people around me who love me and support me. What do I have to complain about in this moment?”

Tellingly, her coaches, Capitani and Carmel’s Chris Plumb — without prompting — spoke about Adams as a person before athlete. The coaches elaborated about the way the swimmer led the team, cared for others, carried herself, responded to setbacks.

“That’s how you measure someone, right?” Capitani said.

The Texas coach suggested the broken hand — Adams struck a lane line while training in Colorado Springs, Colo., before the 2016 trials — haunted the swimmer each summer thereafter. It was “a scary and defining moment,” Capitani said. Adams, seeded fourth in the 100-meter backstroke, finished 46th.

“For a year and half, every cell in your body thinks you’re going to make that team. That’s how you have to think to make the Olympic team,” Capitani said. “That’s a different kind of mourning that you had to do.”

So Adams was motivated to keep her Olympic dream alive, to get to the start of the 100 backstroke — which would have been the deepest event of the 2020 Olympic Trials.

The Texas senior showed every indication of reaching that goal, irrespective of what happened in intervening years.

“Nobody remembers your whole career. People remember how you go out,” Capitani said.

Adams remembers how she started out. She said she was “really not good.”

She was so bad, in fact, that a former Carmel coach, Ian Murray, protested when she was moved up to a new training group. She was placed in a lane with a boy, Troy Li, and pushed off first. She was told not to let Li catch her. Li was told to run over her.

Li became a state champion, too. Murray became an advocate for Adams. And Adams became, well, who she became.

“The air sucked out of the building,” Plumb recalled.

Adams can laugh about it now: The freshman who missed her flip turn at state.

But she said Carmel had prepared her for such a moment, starting sets in the middle of the pool rather than off a wall. She came back and won. Plumb said it occurred to him then that this was a special swimmer.

“It set the tone for her career,” the Carmel coach said.

Adams will remember her career for reasons other than victories or medals or records.

She built relationships with “amazing people,” she said. Carmel Swim Club prepared her for college, and college prepared her for a teaching career. She learned time management, confidence, leadership.

She was awarded a postgraduate teacher certification scholarship from the Texas Athletics/College Football Playoff Foundation. Her next challenge will be to hold the attention of second-graders. Student teaching allows her a transition year, she said, from college sports to workforce.

“She’s really looking forward to seeing who Claire Adams is without swimming,” Capitani said. “That’s scary when something has helped define who you are for so long.

“She definitely has the tools to do exciting things. She just hasn’t done them yet.”