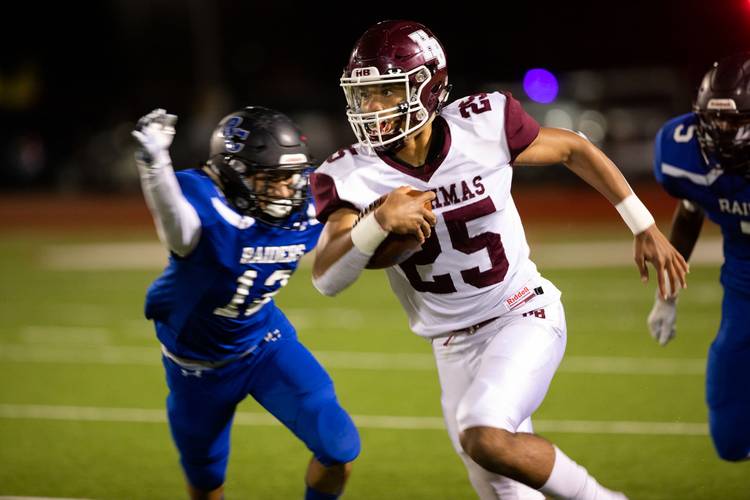 Texas, Oklahoma and Texas A&M regularly battle for in-state recruiting supremacy, with the Longhorns owning the crown since the 2018 class, Tom Herman’s first full cycle as head coach. Texas is once again in an early lead, holding the 10th-ranked class in the nation and 14 total commitments. Oklahoma ranks 15th and has 11 pledges, while Texas A&M sits at No. 19 and possesses 12 commitments.

That doesn’t mean Texas is recruiting better. In fact, each of the three rivals holds a leg up at different positions on the offensive side of the ball.

Each of the three programs are happy with their commitments. Milroe and Stowers are among the best dual-threat quarterbacks in the nation, much less the state. Oklahoma gets the win since Williams is considered a top-5 prospect overall and the best quarterback in the cycle. It’s easy to recruit quarterbacks at Oklahoma considering that each of the last three went on to become Heisman finalists and NFL draft picks.

Texas holds the early advantage out of default. The state’s two best prospects at the position, Camar Wheaton and LJ Johnson, will determine which school wins this position in 2021. Wheaton appears destined for Oklahoma while the Aggies are the clear leader for Johnson.

Oklahoma holds the advantage with two highly-ranked wide receiver prospects. Texas is in the rear. Banks is the highest-rated receiver on the Fabulous 55.

Texas edges A&M with Davis ranking more than 150 spots higher than Garza. Oklahoma has yet to find a tight end.

The Aggies are off to a great start along the line. Fatheree and Wykoff are among a handful of elite linemen from Texas. Oklahoma and Texas are in similar positions with one solid commitment. The Longhorns and Sooners hope to close better than they’ve started up front.